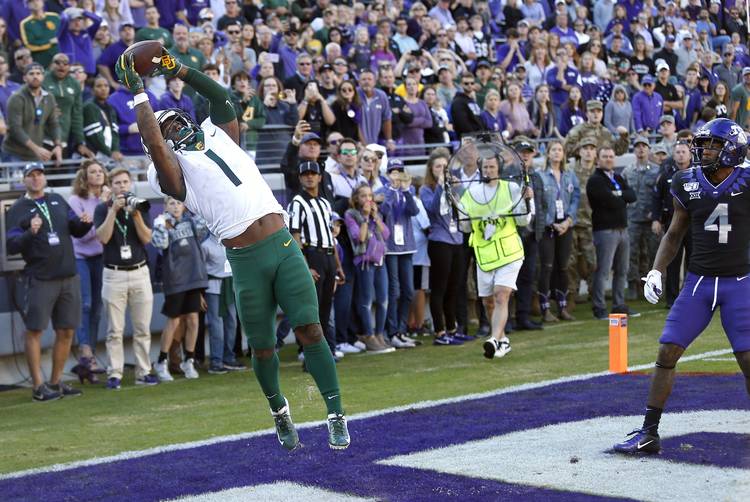 Baylor cornerback Grayland Arnold intercepts the ball in the third overtime of the Bears' 29-23 win over TCU Saturday. Baylor remaned No. 1 in the American-Statesman's Big 12 Power Poll. [AP Photo/Ron Jenkins]

The Bears keep winning. It took overtime to vanquish TCU. Baylor is the most disrespected undefeated team in the country. Matt Rhule’s program can change that perception on Saturday with a home-win over Oklahoma. A win puts the Bears in the playoff discussion and gives them a clear route to the Big 12 title game.

A failed two-point conversion by Iowa State is the only reason Oklahoma remains in title contention. The Sooners have looked vulnerable since their win over Texas, reverting back to the team that can’t stop anyone on defense. Quarterback Jalen Hurts leads the nation in total touchdowns and is putting up bigger numbers than Heisman winners Baker Mayfield and Kyler Murray.

Take a deep breath, Texas fans. The Longhorns overcame a 14-0 first-quarter deficit to seal the game late with another winner from kicker Cameron Dicker. The defense only allowed 55 yards in the second half and stopped Kansas State from establishing a run game. That’s great news for a program that desperately needed a win to quiet the naysayers for at least a week.

Oklahoma State moved up in the Power Poll thanks to losses by Kansas State and Iowa State. The Cowboys host Kansas on Saturday, which should provide the offense with another chance to impress. Running back Chuba Hubbard has 1,604 yards rushing on the season. Oklahoma State is formidable when quarterback Spencer Sanders avoids interceptions.

Kansas State fell in Austin, stopping a three-game winning streak that included victories over Oklahoma and TCU. The Wildcats built a 14-0 lead in the first quarter against Texas, but the offense simply couldn’t exploit the Texas defense in the way other defenses have in 2019.

The Cyclones nearly came from behind to knock Oklahoma out of playoff contention. Iowa State attempted a two-point conversion instead of going into overtime, which was the right choice. The officiating crew missed a pass interference by Oklahoma on that two-point conversion. Texas is up next.

TCU didn’t allow Baylor to score a touchdown in regulation and still managed to lose the game in overtime. It looked like a Big Ten game broke out in Fort Worth between the two rivals. Gary Patterson was happy with the defensive performance. The offense struggles to find big plays in games not against the Longhorns.

The Red Raiders moved a game closer to bowl eligibility in year one under Matt Wells with a road-win over West Virginia. Texas Tech opened as a one-point favorite at home against TCU. Texas Tech needs to win two of the last three to reach a bowl game. The Red Raiders close the season with a trip to Austin.

Kansas football didn’t lose on Saturday since the Jayhawks were idle. That’s something.

I believe first-year head coach Neal Brown will do good things at West Virginia. I also believe none of those good things will happen this season.