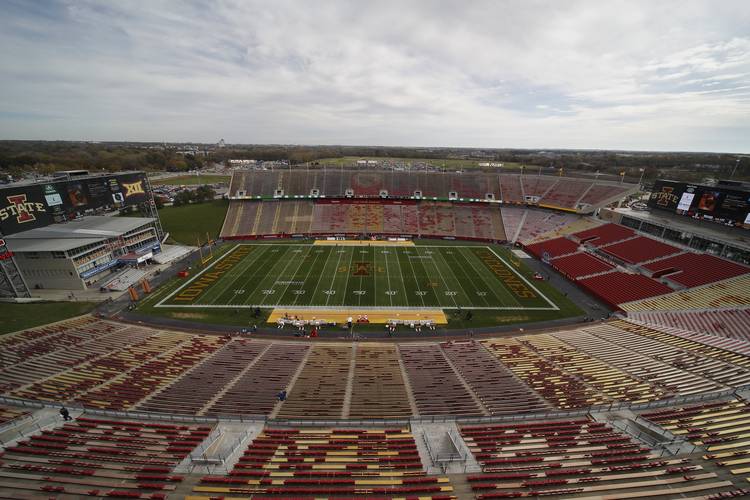 Jack Trice Stadium it set to host Texas against Iowa State this weekend. Temperatures are expected to be in the 30s or low 40s on Saturday. (Matthew Putney/The Associated Press)

Winter is coming and Texas freshman Keondre Coburn is not pleased about it.

On Tuesday morning, the Houston-raised nose tackle was greeted by 30-degree temperatures when he left for school. What he thought was snug clothing wasn’t. The beard he’s grown didn’t keep him warm. Coburn said that walking quickly to class turned out to be his only remedy.

It will get warmer in Austin over the next few days, but the forecast for UT’s football team will remain cool. The Longhorns travel to Iowa State this weekend. The predicted high in Ames on Saturday is 37 degrees.

“I’m not going to lie and say that I love it. I hate the cold,” Coburn said. “It’s football. You’ve got to play in snow, hot, raining, muddy, whatever. I’m ready to play in anything.”

When asked about the coldest he’s been on a football field, Coburn recalled the night game in Lubbock last November. Outside of injured lineman Junior Angilau (Utah) and linebackers Ayodele Adeoye (Missouri) and Juwan Mitchell (New Jersey), many of Coburn’s fellow starters are from the south. But they also have stories that involve cold weather and football.

Defensive lineman Malcolm Roach once had a high school playoff game in Louisiana that was played in snow. Center Zach Shackelford insists he faced subzero temperatures during a pee-wee game while his family was stationed in Germany. Cameron Dicker, the Longhorns’ kicker, recalled it being cold and rainy in San Antonio when his Lake Travis team beat Katy in the 2017 state semifinals.

This season, though, the Longhorns have yet to face any weather-related adversity. Texas has left the state once and that was for an early-October trip to West Virginia. Over its eight outdoor games, the average temperature at kickoff has been 79.9 degrees.

Since the start of the 2014 season, only five UT games have featured a temperature under 50 degrees at kickoff. The last time that Texas kicked off and the thermometer read under 40 degrees? The Dec. 7, 2013 trip to Waco. It was 24 degrees when the last-ever college game at Floyd Casey Stadium got underway.

To prepare for this weekend, Texas planned on practicing outside on Tuesday. Quarterback Sam Ehlinger doesn’t anticipate any problems but said he’ll have to keep his hands warm. Since the footballs will become harder in chillier conditions, Dicker said he’ll need to get more practice kicks in pre-game to gauge his range at Jack Trice Stadium.

Texas coach Tom Herman, though, didn’t anticipate the weather having much of an impact on the game plan. Herman, who was Iowa State’s offensive coordinator from 2009-11, said he’d be much more concerned if heavy winds or rain was in the forecast.

“Temperature is way down the list in terms of things that — weather phenomenon that you gotta deal with when it comes to football,” Herman said. “We’ve got sweats and tight and gloves. They will be fine. They will be running around, I’m sure we will have heaters on the sidelines.”

On Saturday, Texas will face an Iowa State offense that ranks 19th nationally in scoring (36.4 points per game) and 16th in total yardage (479.2 yards per game). The Cyclones also boast top-50 numbers when it comes to scoring defense (25.0) and total defense (359.8).

All said, it appeared that the Longhorns are more concerned with the Cyclones than the weather report. In fact, receiver Devin Duvernay even said that playing in the predicted conditions “should be fun.”

Texas 67, Cal Baptist 54: Guards save the day as Longhorns’ bigs are ‘a work in progress’