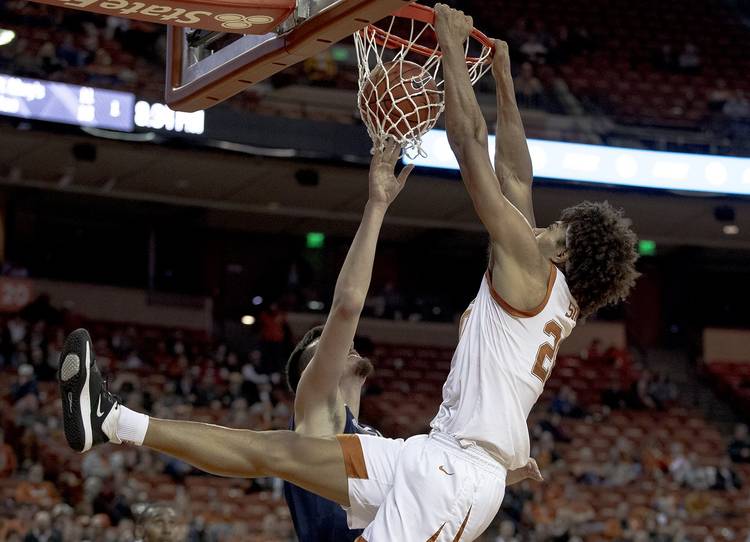 Thanksgiving is just over two weeks away, but the Longhorns should already be thankful for their backcourt. Go ahead, say a prayer for the team’s strength.

Christmas is a far more important time around the Texas men’s basketball program, though.

The last three years, that’s usually about when the program’s future NBA big men found traction. Jarrett Allen, Mo Bamba, Jaxson Hayes were all stuffing the rim with care in hopes a future NBA payday would soon be there.

That’s why it’s too early to judge this year’s frontcourt, tempting though it may be.

“A work in progress,” head coach Shaka Smart called the unit after his team moved to 3-0. It’s been difficult to tell exactly what the Horns have since he’s used a four-guard lineup for extended times thus far.

“We’re still figuring out every day who’s capable of doing what,” Smart said, “and that probably for a while, it’s something we’re still evaluating.”

Start the examination with third-year big man Jericho Sims, who had his first career double-double with 11 points and 11 rebounds. Photographers at the Erwin Center tried to get digital evidence of him smiling afterward, but it wasn’t fruitful. “Yeah, I was pretty serious,” he said afterward, holding back a grin.

The Lancers (2-1) got within three with 7:23 remaining. But Jase Febres drilled a corner 3-pointer, and Sims followed with a dunk. Three possessions later, Sims collected himself and threw it down again, drew a foul and finished the three-point play.

This was a much harder win than it should’ve been considering UT’s strong defensive night. Cal Baptist shot 34.5% and had 16 turnovers. But the Horns were 6-for-24 from 3-point range, allowing the Lancers to hang around. Radford hung around last season. That ended in total disaster. Not this time, though.

After Sims’ play, Texas had a 10-point lead and essentially cruised to the finish line, with a Jones 3-pointer and run-out dunk closing things out.

But there will be nights Texas’ guards can’t save the day. There will be games where Sims, sophomore Gerald Liddell, junior Royce Hamm Jr. and the freshmen Will Baker and Kai Jones must contribute. Big men like Kansas’ Udoka Azubuike do expect some pushback.

Sims is the most experienced of the group, so by default, he’s first in line. Here’s someone who went through Big 12 play last season getting one bucket, maybe two, possibly three and a handful of rebounds but never dominating. His season was derailed by a foot injury.

“The whole year, I was in pain,” Sims said. “My back was hurting. I couldn’t really move. I was too heavy. But now, I feel like I did my freshman year, which is as athletic as anyone in the country. So I enjoy playing, and I have comfort that I have that athleticism back.”

His goal is simple. “So I get the opportunity my junior year to use it and go out and help us win a lot of games,” Sims said.

Sims has undergone some pretty big changes in his life. The Minnesota native finally got his driver’s license, and Sims’ mother drove a Kia Optima down Interstate 35 for him.

He’s changed his workout habits with new strength coach Andrea Hudy, doing more flexibility work than just lifting weights for the sake of getting big. Oh, and one other important change. “No more late pizzas,” he said. Every big man that’s played for Smart swear by the benefits of fish.

“I think when I’m loose, I’m able to move more fluidly throughout the offense,” Sims said. “When I don’t think too much, when I have a clear mind, when I go out there and have fun, that’s when I explode and take off and produce more and play like I would in pick-up games in the summer. I think that’s when I’m at my best.”

“We need him,” Smart said. “Well, it’s fair to say we’re going to make it crystal clear what our expectations are of him and hold him to those.”

Liddell was active in his second game this season, but there were plenty of teachable moments. Like when Febres made a steal in mid-air and threw it behind his head while heading out of bounds. That should’ve been Liddell’s ball. Instead, Cal Baptist’s Milan Acquaah snagged it and drilled a 3-pointer.

Still, Liddell finished with nine points, six rebounds and two blocks and one steal. That’s a lot packed into 18 minutes.

Baker is a mystery, though. The Westlake product went 0-for-6 from the floor in UT’s first two games, and five of those misses were 3-pointers. The 6-foot-11 forward missed two 3-pointers against Cal Baptist, had one block and did little else in four minutes.

Those who have seen UT’s closed practices swear by Baker’s long-range shooting ability. “It’s one of the best things he does,” Smart said. “I think he will be a guy that can really throw his body around, but he’s not a banger right now.”

Give it time. “Those guys, they have it in them,” Smart said.

The Dotted Line: Plenty of Texas commits reach bi-district round of state playoffs