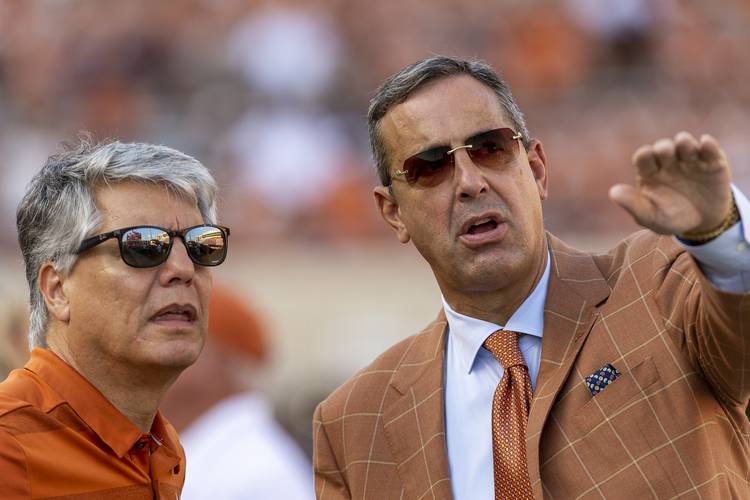 There was a time not long ago when virtually every major decision regarding the athletic department ran through Texas President Gregory L. Fenves’ office. Eventually, he had enough.

Fenves met with TCU’s Chris Del Conte at a New York steakhouse in December 2017 and was convinced. Del Conte, a DeLoss Dodds disciple, took over the Texas athletic department and has transformed everything imaginable, tweeting about all of it along the way.

Now, the university is set to reward Del Conte with a new contract and huge raise that will make him one of the highest paid athletic directors in the nation.

The UT System Board of Regents is scheduled to approve a new deal that stretches out to 2027 and worth just over $18 million guaranteed. The new deal also includes the equivalent of buyout clause, because Fenves told the American-Statesman, “I want to make sure that he stays here for a long time.”

Del Conte will also receive $250,000 in deferred compensation every year for the next four years. The total amount will vest on Nov. 1, 2024.

Del Conte, a voracious Twitter user who will respond to just about anybody, could not be reached immediately for comment.

UT regents, who are scheduled to meet Wednesday and Thursday, must approve any multi-year contract worth more than $1 million. Typically, all items included in the regents agenda are approved.

All money used by the Texas athletic department is generated through revenue from private donations, ticket sales and TV distributions. No public money is used by UT athletics.

The athletic department generated $219.4 million in revenue during the 2017-18 academic year, according to audited figures obtained by the Statesman.

All of this money is guaranteed, according to the UT regents agenda. However, if Del Conte chooses to leave, he will owe “an amount equal to the remaining present value of the unexpired term of the agreement” within 30 days, calculated with a 4% discount rate.

That language effectively ties Del Conte, 51, to UT and vice versa for the life of the deal. In structuring the contract, Del Conte’s contract could be a model for what’s used throughout the department.

USA Today partnered with Athletic Director U to compile a database for athletic directors salaries for the 2017-18 academic year. Notre Dame’s Jack Swarbrick earned just over $3 million, according to their review. No other athletic director crossed $2 million annually, meaning that Del Conte is likely the second-highest paid AD in the nation now.

Dodds, the architect behind UT’s run to national prominence in the modern era, was making about $1.1 million in 2012 before his retirement.

On Del Conte’s watch, the Texas athletic department has been totally remade. His signature achievement is going on a barnstorming mission to raise $125-million for the long-dreamed south end zone renovation of Royal-Memorial Stadium.

Construction has already begun. “Renovations will be complete in time for the ’21 season…,” Del Conte tweeted Sunday. Eight families gave $10 million each to be considered the project’s “Founders.”

Fenves had the idea for the financing structure behind the new basketball arena, but it was up to Del Conte to help find a partner. The school is working with the California-based Oak View Group, a company that will build and manage the $338-million arena that will eventually belong to UT.

On Saturday, the school announced a $130-million gift from the Moody Foundation of Galveston to call the new arena the Moody Center.

Del Conte’s season-ticket sales push was labeled “Celebrate Texas,” as its his desire to turn every home football game into a “celebration of all things Longhorns.” All voices are heard, too.

Last weekend, a fan tweeted to Del Conte a suggestion they add a small TV in the upper deck so fans could watch the game while getting ice cream.

“Will have our staff take a look,” Del Conte responded. “Thanks for spending your Saturday with us.”