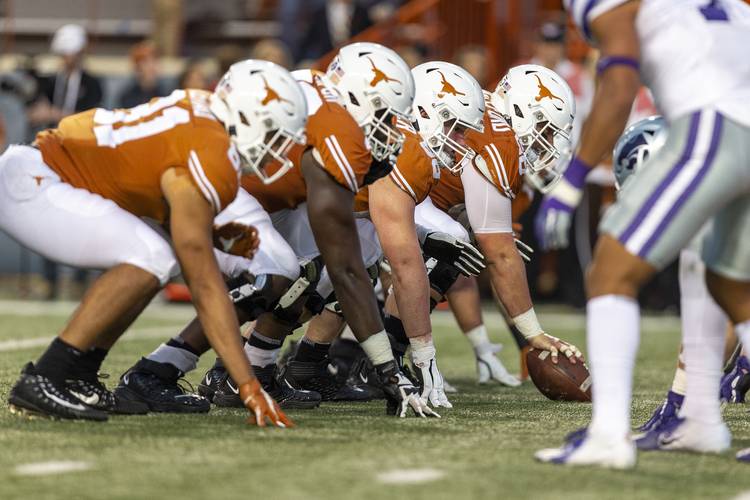 Texas offensive line goes against Kansas State in the second half of an NCAA college football game at Royal-Memorial Stadium, Saturday, Nov., 9, 2019. [Stephen Spillman for Statesman]

Junior Angilau is out with an injury, with junior Derek Kerstetter starting in his spot

On a team that has suffered the misfortune of injuries at several positions this season, Texas’ offensive line remained lucky for a long stretch.

Until now. Right guard Junior Angilau will be the first starter from the line to miss a game when the 19th-ranked Longhorns (6-3, 4-2 Big 12) face Iowa State on Saturday in Ames. Angilau suffered a knee injury — a sprained MCL — in the first half of last week’s 27-24 victory against Kansas State.

Angilau will miss at least one game, head coach Tom Herman said Monday. But the Longhorns can compensate thanks to a versatile starter and a backup with some experience, quarterback Sam Ehlinger said.

Junior Derek Kerstetter is the versatile one. Normally the starter at right tackle, he moved to guard when Angilau left the Kansas State game. Kersetter also is on the depth chart at center, where he filled in during the second half against Rice when starter Zach Shackelford suffered a foot injury.

“He can play any position on the offensive line,” Ehlinger said. “Not a lot people realize how hard that is going from playing right tackle half the game and then flying down and playing guard.”

Junior Denzel Okafor is the new right tackle. He played in 12 games in 2017, starting four, before redshirting last season.

“It’s not like it’s his first game ever,” Shackelford said.

Ehlinger said Okafor is diligent during practice and therefor prepared for the job.

“He came in and there was no dropoff,” Ehlinger said.

The Longhorns gained 162 yards in the first half and 315 in the second against Kansas State. Keaontay Ingram rushed for a career-best 139 yards and two touchdowns on only 16 carries. He had 25 yards at halftime.

Ehlinger was accurate in both halves, completing 22 of 29 passes.

Before facing Texas, Kansas State ranked third nationally in time of possession with an edge of 10 minutes a game. The Longhorns won that category by nearly three minutes.

None of this is to suggest that the line played close to a perfect game. Left tackle Samuel Cosmi was flagged twice for holding. The first negated a 29-yard pass from Ehlinger to Collin Johnson in the first quarter. The second wiped out a seven-yard run by Ehlinger during the 13-play, 6:45 drive that led to the game-winning field goal by Cameron Dicker.

The offensive line figured to be an asset this season, but the group has not always performed to its capabilities. Ehlinger was sacked nine times by Oklahoma.

Herman issued a mixed review from the game against Kansas State, noting that only Shackelford graded out “at championship level” in the game.

“The right side of the line was serviceable. It was plenty good enough for us to do the things we wanted to do and did do,” Herman said. “Obviously, when you rush for 214 yards against that defense, and you go 22-for-29 in the throw game, you are doing something right.”

Offensive penalties were not exclusive to the line. Johnson and Ehlinger each committed one. The Longhorns also were flagged for an illegal formation that negated a touchdown run by Ehlinger before Dicker’s winning kick.