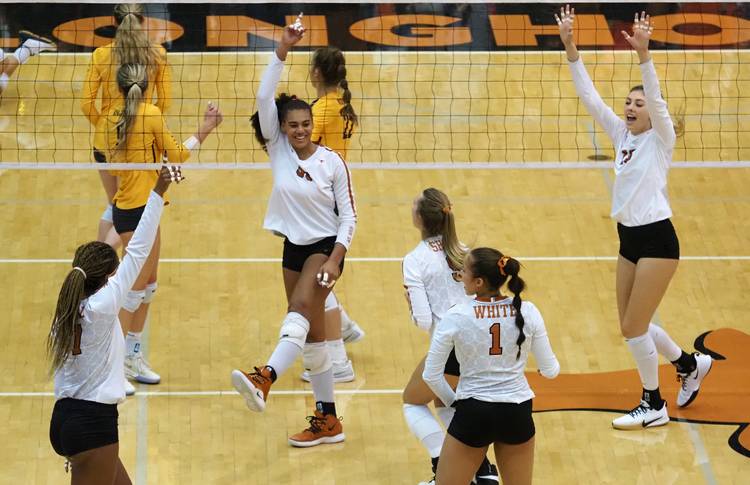 Micaya White elevated, raised her right arm, and hammered another volleyball into the ground, this one the emphatic finish to a busy night for the Longhorns senior.

White, the primary outside hitter for Texas, made 33 swings with a strong .333 accuracy. She served 20 times. She walked into the post-match press conference with an ice pack on her right shoulder. She had worked very hard, but enjoyed the night.

“I liked our energy, how we got fired up,” White said.

“I thought we were scrambling and making some plays and playing hard,” Elliott said.

Freshman middle blocker Molly Phillips had 10 kills and five blocks and, like White, enjoyed the energy exuded by the Longhorns.

“That’s really cool to be a part of,” Phillips said.

Brynn Carlson led Kansas State (8-16, 3-9) with nine kills. Peyton Williams, whose .327 percentage ranked fourth-best in the Big 12 before Wednesday, was limited to .048 by the Longhorns.

The first set actually was competitive until Texas finished with a 6-1 push. Phillips smacked kills for three of those final six points. She finished the set with six kills and a .667 hitting mark. White made five kills and hit .714.

The Longhorns scored four straight points on White’s serve. Texas outhit Kansas State .452 to .133 in the set. The Longhorns defense was even more extraordinary during the second set, holding Kansas State to a paltry .100 hitting.

White served for seven consecutive Texas points, two of them aces. She had two more aces in the third set.

“This was definitely one of my better serving games,” White said.

The Longhorns have lost just two sets during their winning streak. Not bad for team that starts two freshmen, four sophomores and White, the veteran.

“We didn’t know what we had this year,” Elliott said this week. “We knew we had a lot of talent, but I’ve been very pleased with the way that they’ve meshed. They have a good chemistry. It doesn’t shock me that we are in this position.”

Notes: Longhorns freshman Asjia O’Neal missed the match because of a family matter, Elliott said. … Jhenna Gabriel and Claire Hahn combined for 31 assists and 13 digs. … Texas’ next match is against TCU on Saturday at 7 p.m. at Gregory Gym. It’ll be aired on the Longhorn Network.