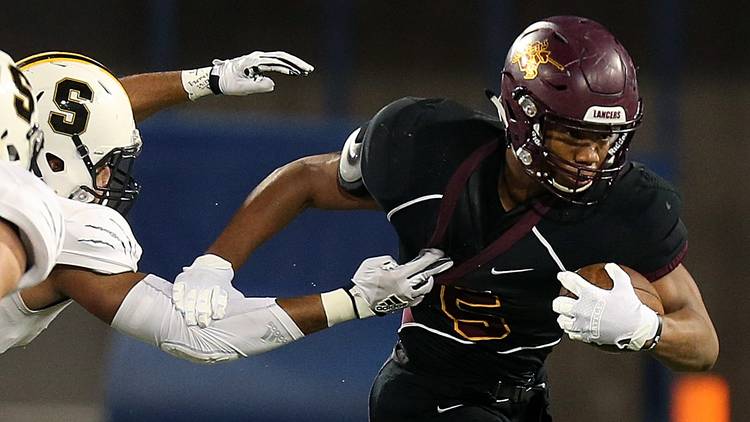 It’s crunch time for the 2020 recruiting class with five weeks until the early signing period. The past two years have taught us that most of the prospects will choose to sign in December rather than wait until national signing day in February. Texas’ class consists of 18 members, ranking sixth in the nation and first in the Big 12.

The class won’t reach 25 members. Tom Herman said that the Longhorns don’t expect to sign a full class due to a young roster and a lack of attrition. The keys for Texas down the stretch include adding new members while stopping the leak of decommitments. The class has lost three members since the loss to Oklahoma.

The most important member of Texas’ 2020 cycle happens to be the highest-rated. The Longhorns need a five-star running back and they hold a commitment from one in Robinson, a five-star from Arizona. Texas must keep him committed. The 6-0, 200-pound playmaker is averaging more than 20 yards per carry. That’s not a misprint. Even with Keaontay Ingram emerging and a young stable of backs, the Longhorns need to add a true NFL talent to the roster to take pressure off the passing game.

The worry is larger for Robinson because he’s from out of state. He’s not within driving distance of the staff, and he didn’t grow up a UT fan. It’s simply harder to keep out-of-state commitments on message than the ones within your borders, no matter the school. Texas can sell early playing time and a high-powered offense to Robinson. The worry is that other programs can sell a success on a national level.

Dixon took the first step toward flipping to Texas by backing off of his pledge to Arkansas after the firing of Razorbacks head coach Chad Morris. The three-star athlete is wanted at slot receiver by the Longhorns. He’s a 6-0, 180-pound playmaker from Carthage and is the younger brother of UT running back Keaontay Ingram. It feels like a matter of if, not when, Dixon pledges to Texas.

Burns is a newer name on the Texas radar. The outside linebacker from IMG Academy (Fla.) is committed to Ole Miss. He picked up a UT offer on Oct. 2 and took an official visit to Austin to watch the Longhorns beat Kansas State. Burns is a Texas native, growing up in Terrell before transferring to IMG before his senior season.

If Robinson is the most important commitment, Collins is the most valued target remaining on the recruiting board. The big-bodied defensive lineman from Bastrop Cedar Creek is the remaining piece for assistant coach Oscar Giles and his defensive line class for 2020. Texas already holds pledges from Vernon Broughton, Van Fillinger and Prince Dorbah, who is likely transitioning to B-backer like Joseph Ossai did after playing defensive end in high school.

Collins became even more important when Manor defensive end Princely Umanmielen decommitted. Collins ranks 12th on the Fabulous 55 and is the highest-ranked uncommitted defensive prospect in the state. Landing him would put a bow on the defensive line group that headlines Texas’ 2020 defensive class.