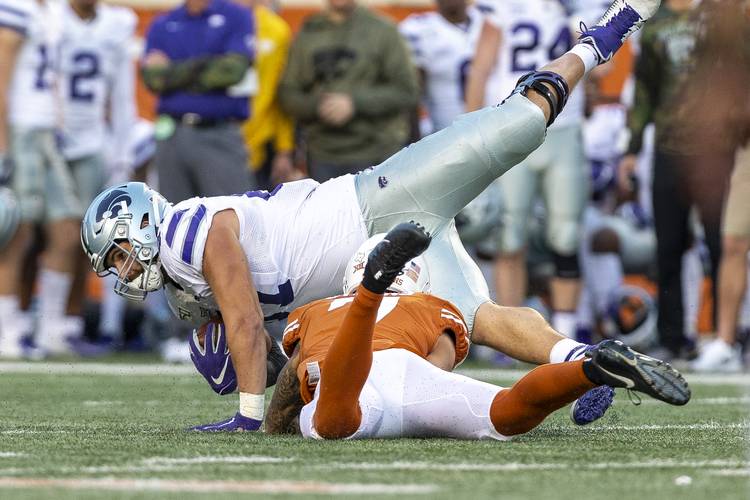 This week’s notable number is 1 — the jersey number worn by senior wide receiver John Burt and injured freshman linebacker DeGabriel Floyd. The single-game high for sacks among UT defenders this season is one. On only one occasion has UT had four 100-yard rushers in the same game — Jim Bertelsen (137), Steve Worster (137), James Street (121) and Ted Koy (111) each topped the century mark in a 45-14 win over SMU on Nov. 1, 1969.

One also represents the number of tight ends who have caught a touchdown pass against Texas this season.

Texas has surrendered 22 touchdowns through the air, the 12th-most in the nation. Of those 22, 19 have been hauled in by players who are listed on their rosters as receivers. Rice running back Aston Walter caught two touchdowns in UT’s blowout win  in September.

That leaves just one touchdown pass that Texas has surrendered to a tight end. On Oct. 26, Pro Wells scored on a 24-yard play in TCU’s 37-27 win over the Longhorns. The 6-4, 257-pound tight end was lined up in the slot on that play, however, so an asterisk may be needed.

Iowa State’s tight ends will pose a bigger threat when Texas visits Ames on Saturday. Charlie Kolar has 36 receptions, 515 yards and six touchdowns this season. Chase Allen is averaging 9.9 yards per catch and has scored twice. Dylan Soehner has turned six catches into 101 yards and a 23-yard score. In last week’s 42-41 loss to Oklahoma, all three tight ends reached the end zone.

A 6-6, 252-pound sophomore, Kolar’s 36 catches have only been bested by eight players in the Big 12. Florida Atlantic’s Harrison Bryant currently leads all tight ends in the country with his 48 receptions.

Analyzed Orlando: “They’re such hard matchups. We played against them last year, and who do you put on them? If you put a DB on them that weighs 190 pounds, they get boxed out. You put a linebacker on them, maybe it’s a little bit too slow. They expose those matchups.”

How will Texas handle a tight end-friendly offense? Herman called out safeties Brandon Jones, Caden Sterns and B.J. Foster by name in his weekly press conference on Monday.

Jones leads Texas with his 61 tackles. The senior has also been tied to four turnovers (two interceptions, one forced fumble and one fumble recovery). Sterns and Foster have battled injuries during their sophomore seasons, but their combined careers feature 170 tackles and six interceptions.

“We’re going to have to be, I have to say, physical in defending the pass because tight ends love to be physical with DBs,” UT defensive end Malcolm Roach said. “I feel like we just have to get in situations that they’re not comfortable with. At the end of the day, we’ve got to go out there and just play hard.

Last year, Kolar was a second-team honoree on All-Big 12 team. He did not record any catches in a 24-10 loss to Texas, however.  Texas surrendered 13 pass completions in that 14-point decision in Austin, but a 9-yard catch by Allen was the only contribution by a tight end.