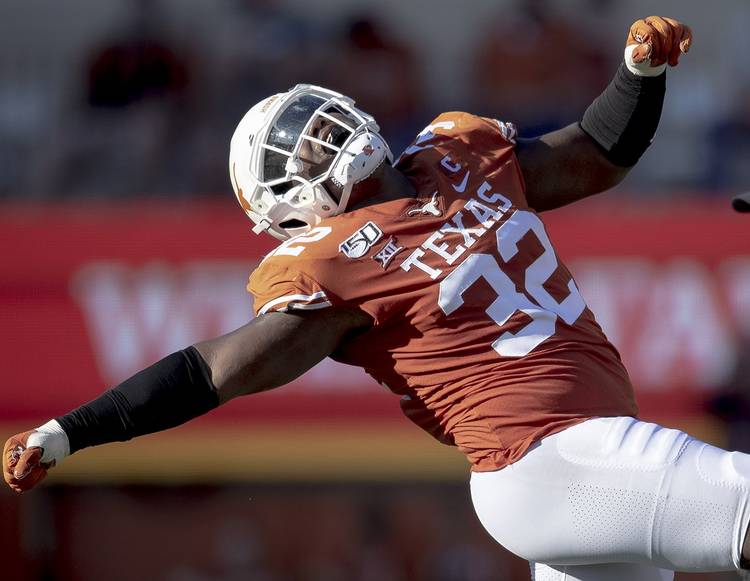 Five key matchups in the Texas-Iowa State game to keep your eye on Saturday:

Purdy arrived on the scene last season and has 18 career starts, including a 9-4 mark in Big 12 games. He’s already broken the school record for 300-yard passing games (seven) and leads the Big 12 in passing yardage (316.6 yards per game). Purdy has thrown a touchdown pass in nine straight games, tying for the third-longest streak in Iowa State history. Texas’ pass defense shut down Kansas State after falling behind 14-0, but the Horns are still allowing 299.6 passing yards per game. Getting safety Chris Brown (forearm) back on the field this week should help.

Roach is heading down the stretch of his senior season and giving full-throated leadership in the locker room. He has 24 tackles, five tackles for loss and one sack. Teams are actively trying to avoid him. But Roach must still be disruptive and lead a defensive line that’s been inconsistent at best. Meeker was an honorable mention All-Big 12 pick last season and has 29 career starts on his ledger. Roach has pleaded with his teammates to follow his lead, but that means it’s time to produce. Doubt this hard-charging Louisiana native at your own risk.

Duvernay should get a hard look for All-America status for his eye-popping season. The coaches asked Duvernay to move from outside receiver to the slot just before preseason practice began in August, and it’s been boom times ever since. Duvernay ranks second nationally in receptions per game (8.7) and 10th nationally in yardage (910). Eisworth, a South Grand Prairie product, had a career-high 15 tackles against Iowa earlier this season. He’ll have safety help over the top, but Duvernay loves matchups in the open field against those defensive back/linebacker hybrid players.

Vance, a sophomore, has found tremendous success blitzing from his middle linebacker position. He ranks second in the Big 12 and 18th nationally with 0.8 sacks per game. He ranks sixth nationally with sacks among linebackers and has 47 tackles overall. As Texas fans know, LSU and Oklahoma linebackers had good success coming hard off stunts and blitzes against the Horns’ offensive line. Texas right guard Junior Angilau will be out this week with a sprained knee ligament, prompting Derek Kerstetter to move to guard and Denzel Okafor to play tackle. Those two had no problems against Kansas State, though.

The Cyclones’ average margin of loss since 2017 is 5.4 points. Matt Campbell’s team is competitive every Saturday. This particular team has a plus-73 scoring differential in the fourth quarter. Just ask Oklahoma about Iowa State’s comeback ability when the chips are down. Texas has held the wall, getting last-second game-winning field goals against Kansas and Kansas State in the last three games. The Horns might not fare well in a catch-up scenario in the fourth quarter in Ames. Texas needs to get a lead and hold on to it, because Iowa State is a hard-changing bunch late.

The long run: Keaontay Ingram is now proving why he was Texas’ starter all along