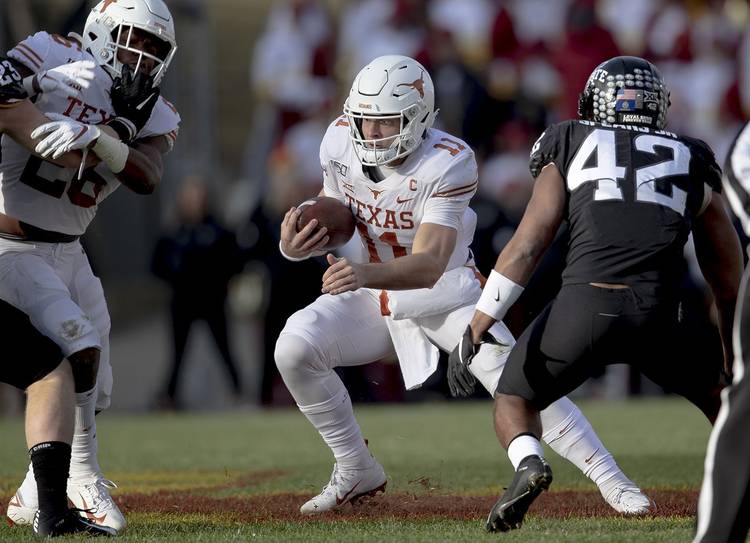 AMES, Iowa — The Texas running game was grounded on Saturday. As a result, the Longhorns were punished with a season-defining loss.

Texas entered the game averaging 173.0 rushing yards per game. That ranked 51st in the country. Ingram had recorded three 100-yard performances while freshman Roschon Johnson ran for 121 yards during a win at West Virginia.

Using a three-man front, Iowa State shut down UT’s backfield. The Longhorns had only one gain over 10 yards. Quarterback Sam Ehlinger ended up leading the team in rushing yards (27) and attempts (12).

Allowing 128.4 rushing yards per game, Iowa State owned a top-35 run defense. The Cyclones used a three-man front on Saturday, but Ingram noted that an extra defender was still placed in the box. Ingram also told reporters that the Cyclones defensive backs weren’t playing that deep.

“I told you guys (on Tuesday), the No. 1 goal of a defensive coordinator is to stop the run, and they did that,” Ehlinger said. “I thought we did a good job of continuing to fight.”

Ehlinger did throw for 273 yards and three touchdowns, but the Longhorns’ failures on the ground proved fatal on two key instances. In the second quarter, Ehlinger was dropped for a loss on a 4th-and-2 carry to the right side from the Iowa State 21. And with 4:01 left in the game and Texas nursing a one-point lead, the Longhorns were forced to punt after gaining zero yards on two runs and an incomplete third-down pass. After the 67-yard punt, Iowa State drove to the Texas 19 to set up the game-winning field goal.

Texas coach Tom Herman, who had considered sending Cameron Dicker out for a field goal on that first-half fourth down, noted after the game that Texas has a favorable winning percentage when its running backs combine for at least 20 carries. In UT’s four losses, the running backs have hit that 20-carry mark once. On Saturday, Johnson and Ingram combined for 14 carries and 27 yards.

Johnson sits: While Collin Johnson watched warmups, Texas announced that the senior receiver would miss the game with a sore hamstring. With 35 receptions and 497 receiving yards, he’s the second-leading receiver on the team. In each of UT’s past two games, both Johnson and Devin Duvernay had exceeded 100 receiving yards.

In addition to Johnson, Texas also was without starting tight end Cade Brewer (ankle). Much like it did last week when Brewer was unavailable, UT opened with a four-receiver look. Duvernay and fellow senior John Burt made the 27th and 23rd starts of their careers, while redshirt freshman Malcolm Epps started for the fifth time. Freshman Marcus Washington made his first-ever start.

Without Johnson, Texas was led by Duvernay (nine catches, 107 yards). Sophomore Brennan Eagles spread his 84 yards among four catches. Epps hauled in a 7-yard touchdown pass that gave Texas a short-lived lead in the final quarter, but he and freshman Al’Vonte Woodard were the only other receivers who caught a football.

Texcetera: Longhorns cornerback Anthony Cook started but was later ruled out with a knee injury. … Iowa State receivers Deshaunte Jones and La’Michael Pettway had 144 and 100 receiving yards. Heading into this weekend, UT’s secondary had allowed five 100-yard performances. Three of those 100-yard games were by LSU receivers.  … Duvernay crossed the 1,000-yard threshold in the loss. It’s the 10th 1,000-yard season in UT history. … D’Shawn Jamison’s second-quarter interception was his third this season. All three have been recorded on the road.