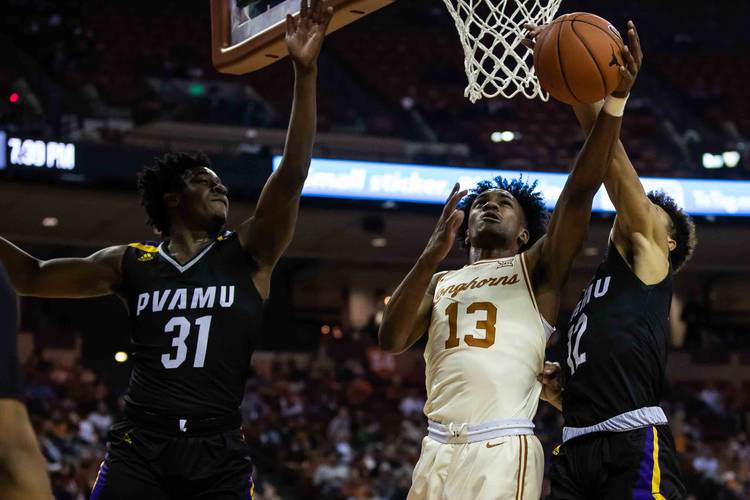 Texas' Jase Febres (13) goes up for a shot over Faite Williams (12) during Friday night's UT win at the Erwin Center. (Lola Gomez/American-Statesman)

Perhaps nothing Shaka Smart did during the offseason was more important than hiring a guy who spent more time as high school head coach than he had as a college assistant.

While Smart tries to assemble a well-functioning offense, Luke Yaklich’s defense enabled the Longhorns to win two games this week in which they struggled to score in the first half.

“We want our defense to be our anchor,” Smart said. “The last two games, we scored 26 points in the first half, but our defense allowed us to have a lead going into halftime both times.”

Indeed in this game, and a 67-54 win against California Baptist on Tuesday, Texas led 26-22 at the break. The Longhorns (4-00 had unproductive offense but terrific defense, thanks largely to Yaklich, 43, who spent 14 seasons as a high school coach, four as an assistant at Illinois State, and the last two at Michigan. The Wolverines ranked second last season and third the previous year nationally in defensive efficiency, according to KenPom.com.

Prairie View (1-3) shot 43%, not bad, but those 21 turnovers were damaging. Four of them were via steals by Longhorns freshman Donovan Williams.

Lenell Henry, who led Prairie View with 12 points, committed eight turnovers. Ellis made eight 3-pointers at Central Florida on Nov. 9 but was limited to six attempts and two baskets against Texas, which used Matt Coleman as the primary defender.
Coleman also led the Longhorns in scoring with 17 points. He scored seven of their last eight in the game.

Andrew Jones had 15 and Williams added 13. Jase Febres scored 10. He made two 3-point baskets in a span of less than two minutes in the second half, enabling Texas to create some separation.

“Our guys are doing a really good job getting their hands on the basketball,” Smart said. “We’ve had deflections in the high 30s the last two games. Our goal is 32.”

Both teams improved in the second half, Texas shooting 50% and Prairie View 48.1.

Texas reduced its 3-point attempts, hitting 5 of 14 in the second half, and relied more on driving to the basket. Good move, considering Texas has shot 3-pointers with less than 30% accuracy this season.

“We wanted to come out more aggressive,” Jones said. “We played a little timid, shot a lot of threes in the first half. We just decided we were gonna play to our advantage and get stops and pound the ball into the paint.”

Smart said he expects that the Longhorns will have a good season shooting 3-pointers.

“We’re getting a lot of good looks,” Smart said. “Mostly good shooters are getting those looks. That being said, if you are getting good looks and they are not going down as much, then you gotta find other ways.”