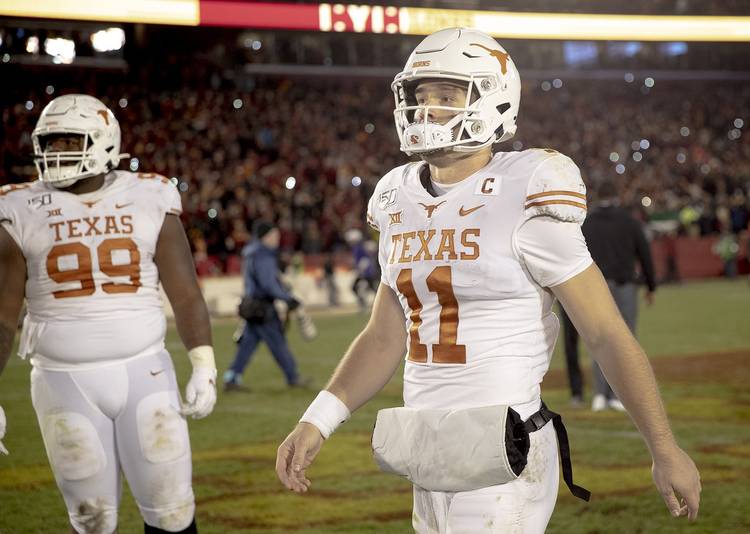 Texas quarterback Sam Ehlinger is left with no opportunity to lead a comeback after Iowa State kicks the winning field goal on the final play Saturday. [NICK WAGNER/AMERICAN-STATESMAN]

AMES, Iowa — There were 145 snaps taken in No. 19 Texas’ 23-21 loss to Iowa State on Saturday. Here are five that ended up making a big difference:

Outscored 17-3 over the first quarters of its last two games against TCU and Kansas State, Texas was shut out in Saturday’s opening 15 minutes. With the Longhorns trailing 7-0, D’Shawn Jamison intercepted a pass with 12:02 to go in the second quarter. That play put UT at the Iowa State 39 and gave the Longhorns a shot at getting on the scoreboard.

After five plays, Texas faced a fourth-and-2 at the Iowa State 22. UT coach Tom Herman kept his offense on the field instead of attempting a 39-yard field goal. (Kicker Cameron Dicker is 7-for-8 on field goals of less than 40 yards). The gamble did not pay off as quarterback Sam Ehlinger was dropped for a loss of a yard.

Entering the game, Texas was 6-for-13 on its fourth-down attempts. That .462 success rate ranked 91st among FBS teams.

Over the first six times it touched the football Saturday, Texas compiled 59 yards of offense. The Longhorns punted five times. The offense picked up only two first downs.

After a field goal gave Iowa State a 10-0 lead with 47 seconds left in the first half, the slumbering Longhorns woke up. Texas drove 75 yards in 30 seconds as Ehlinger completed passes of 17, 33, 11 and 14 yards. The last completion was to sophomore Brennan Eagles, who managed to get a foot inbounds while being shoved out by a Cyclone defender.

In case you weren't paying attention to the start of the 3Q. pic.twitter.com/hGoaty1GrK

On the first play of the second half, Iowa State receiver Deshaunte Jones hauled in a 75-yard touchdown pass. Jones started the play in the backfield but was able to sneak undetected past UT safety Chris Brown and cornerback Kobe Boyce, who was preoccupied with his assignment. After avoiding two tackles, Iowa State quarterback Brock Purdy  found Jones for the score.

Iowa State built a 20-7 advantage in the second half, but Ehlinger had two touchdown tosses in the fourth quarter to give the Longhorns a lead. The second was scored with 5:37 left. It came on another fourth-down gamble by Herman.

HUGE touchdown for the Longhorns!@TexasFootball goes for it on fourth and goal and converts to give them the 1-point lead. pic.twitter.com/f1tefqUDLf

Facing a fourth-and-goal at the Iowa State 7, Texas once again kept Dicker on the sideline. The Longhorns emptied their backfield on the play, but Ehlinger was unable to immediately find an open teammate. After scrambling away from four Cyclone defenders, Ehlinger fired a pass that a diving Malcolm Epps caught.

The touchdown was Epps’ second of the season. A redshirt freshman, Epps was starting in place of injured senior Collin Johnson.

5. Heartbreak for the Horns

Iowa State and Texas traded punts after Epps’ touchdown catch. That sequence set up a dramatic finish for Iowa State, which drove from its 18-yard line to the Texas 19 over the span of eight plays and two UT penalties.

With no time left, Connor Assalley nailed a 36-yard field goal to secure the win.

Three of Texas’ last four games have been decided by a buzzer-beating field goal. In a 50-48 win over Kansas on Oct. 19, Dicker was good from 33 yards out on the game’s final snap. Dicker then hit a 26-yard field goal at the gun in UT’s 27-24 upending of Kansas State on Nov. 9.