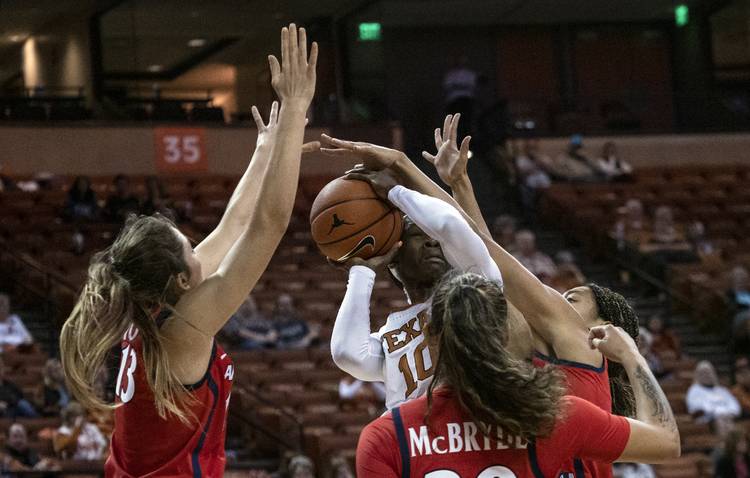 Texas began the season as the 15th-ranked women’s basketball team in the country. Arizona was picked to finish sixth in the Pac-12.

Neither looked the part Sunday.

Junior Aari McDonald scored a career-best 44 points, leading Arizona to an 83-58 win over a Texas team that slid to No. 22 after losing at South Florida and will no doubt plummet from the rankings this week.

McDonald, the leading returning scorer in the country — she averaged 24 a game last season — converted 14 of 18 shots, including 2 of 5 3-pointers, and all 14 of her free throws.

She was asked if anybody is capable of guarding her.

“I’m not trying to be cocky, but no, I don’t think a lot of players can guard me,” said McDonald, a 5-foot-6, exceptionally quick left-hander.

Texas coach Karen Aston tried at least three defenders as well as some zone, but McDonald still managed to equal the most points ever scored against Texas by an opponent in the Erwin Center.

The Longhorns (1-2) converted 9 of 26 3-pointers, improvement over the 4 of 27 they hit in their first two games. But five were in the fourth quarter, and the Longhorns still managed to get outscored by 10 points.

“When we did get some confidence and get some things going offensively, we could never get any stops,” Aston said. “Right now, as much as it looks like our offense is our problem, I think the fact that we can’t get consecutive stops is a bigger problem.”

Aston said the Longhorns have played some poor transition defense — Arizona had 19 fast-break points — and that sometimes players sent into the game as subs don’t know which player they are supposed to guard.

“We can’t afford right now to have possessions where (opponents) get easy buckets because we don’t know what we’re doing,” Aston said. “That’s on me, completely on me. It’s puzzling because we practice way better than we are playing.”

Not that the offense is excelling. The Longhorns are shooting just 41% through three games and have committed 52 turnovers, including 21 against Arizona.

One issue Sunday was that Arizona defenders congregated around the foul lane with the knowledge that the Longhorns are unlikely to make opponents pay with 3-point shooting.

“We couldn’t knock down shots, and that’s kind of hard because they were packing the paint,” said Texas forward Joyner Holmes, who did make shots.

Point guard Sug Sutton, who scored 10 points but committed a team-high five turnovers, said the Longhorns could stand to show more patience against the type of defense Arizona presented.

“Too rushed right now,” she said. “We need to keep attacking, reverse the ball.”

As for Arizona, some context to the preseason picks is probably necessary. Yes, the Wildcats were picked to finish sixth in the Pac-12 by coaches and media. But four of the teams picked ahead of them — Oregon, Stanford, Oregon State and UCLA — are in the top 11 of the Associated Press poll, and Arizona State is 19th. Arizona, the reigning NIT champ, is 31st in votes received.

“I don’t think we are underrated,” coach Adia Barnes said. “To be sixth in our conference, you are a top 20 team.”