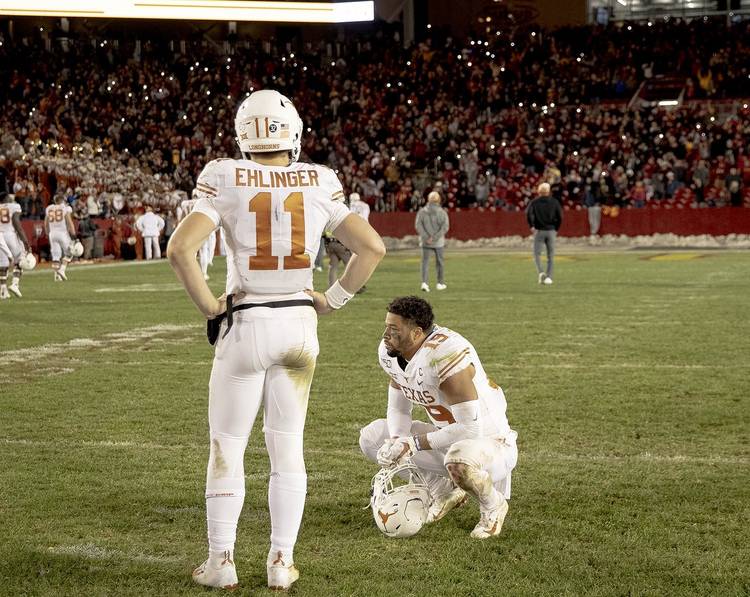 There's nothing left for Texas quarterback Sam Ehlinger and defensive back Brandon Jones to do after Iowa State kicked the winning field goal Saturday. [NICK WAGNER/AMERICAN-STATESMAN]

AMES, Iowa — The Fox broadcast crew had a spot-on observation about Iowa State’s 23-21 win over Texas.

There might have been a time when a loss like that would’ve been national news. Not anymore. It wasn’t even an upset. The Cyclones were favored by seven.

Brady Quinn pointed directly at Texas’ coaching staff, most egregiously for the multiple players jumping offside on a previous field goal attempt that gave the Cyclones a first down.

“This team shouldn’t be losing out to a team in Iowa State that hasn’t recruited quite as well, doesn’t have as many talented players as Texas does,” Quinn said.

Herman admitted afterward that Texas couldn’t “run the ball the way that we thought we were going to be able to.” But asked if he was outcoached, he said: “I’d never say we got outcoached. I think we continued to make adjustments, and they had a couple of wrinkles that we adjusted to.”

Oklahoma did its part by storming back from 25 points down and winning 34-31 in Waco. It was the biggest come-from-behind win in Sooners history. Meanwhile, Texas collapsed in Ames.

The Longhorns and Bears will meet at 2:30 p.m. Saturday at McLane Stadium. At this point, Texas is playing for nothing more than a better midtier bowl.

“Every time we lose, I’m angry at myself,” Herman said Saturday. “As the head coach, you always wonder what you should have done differently. That’s for me to examine (Sunday). Right now, I hurt for our upperclassmen who are going to not experience the joy of winning a conference championship.

“Thankfully, they do have a New Year’s Six championship under their belt and they’ve won a lot of big ballgames in their time here. But feel really bad for those guys who we didn’t do enough this week in preparation to come out with a win.”

There are plenty of specifics to dissect. The offense managed just 54 yards rushing, prompting running back Keaontay Ingram to say, “They played us different.”

Asked about UT’s first-half struggles, quarterback Sam Ehlinger said: “I don’t know. I need to go back and watch it. We just couldn’t make a play.”

Herman called it a “really, really poor performance by our offense for the first few quarters. We’ve got to really examine our game plan in the run game and our execution.”

The defense played well enough to win. D’Shawn Jamison, Brandon Jones and Joseph Ossai had nine tackles each, and Jamison snagged his third interception of the season.

Defenders lost track of Iowa State’s Deshaunte Jones on a 75-yard touchdown catch to open the second half, and the Cyclones’ Breece Hall had 101 yards rushing. But Texas was still in position to win after going up 21-20 with 5 minutes, 37 seconds remaining.

The offense needed to get one or two first downs to close it out and couldn’t. The Horns had eight drives go three-and-out. On the most critical drive, Herman the gambler went oddly conservative. Ehlinger ran for no gain on first down, Ingram was stuffed on second down, and then Devin Duvernay dropped a tunnel screen.

The Cyclones took over and never looked back. When multiple Texas players jumped offside on fourth-and-5 with 2:12 remaining, giving Iowa State a free first down, that calls UT’s coaching into question. It’s a matter of discipline.

Setting aside what happened at Jack Trice Stadium, most Texas fans will correctly focus on the big picture.

With Herman’s third season winding down, Texas is not competitive nationally. It’s a program that’s losing to teams with lesser talent, as judged by the recruiting rankings.

Texas has better players, at least theoretically, and more resources. More everything, really. And yet, the Cyclones were favored and controlled the game almost from start to finish.

“Obviously, hats off to Texas,” Iowa State coach Matt Campbell said. “We’ve got a lot of respect for them, but I could not be prouder of our kids.”

Herman was hired to lift Texas nationally. The Horns are no longer mired in mediocrity, to be sure. But this was supposed to be a season in which those inside Moncrief figured getting back to Arlington was a sure-fire bet.

Now, Texas needs to hold off what is sure to be an angry Baylor bunch or risk flirting with a .500 finish.

No, things have not gone according to Texas’ plan.

“Obviously, we’ve got to execute, do a better job,” senior safety Brandon Jones said. “We still have two more games. Just got to finish strong.”