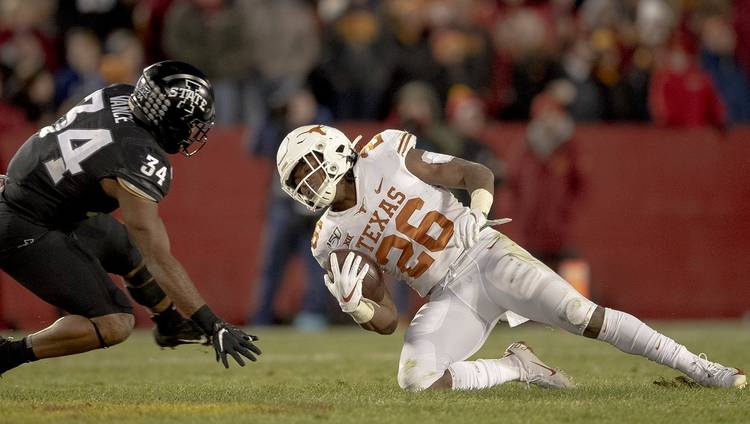 Texas coach Tom Herman says he doesn’t listen to the “outside noise,” although he has felt compelled to tell fans to ignore “misinformation” being published about the football program.

But he must’ve heard something after Saturday’s 23-21 loss to Iowa State that essentially knocked the Longhorns out of Big 12 title contention.

On Monday, Herman acknowledged the fan base has “every right to be” angry about the team’s 6-4 record and walked back his post-game assessment that the UT staff did not get out-coached at Jack Trice Stadium.

It was one of those fall-on-the-sword kind of days. But Herman admitted that Texas had better regroup this week against No. 13 Baylor (9-1, 6-1 Big 12). The Bears will no doubt be looking for flesh after giving up a 25-point lead and losing Saturday.

If Baylor wants a rematch against Oklahoma in Arlington, coach Matt Rhule’s club can secure a spot by knocking off Texas (6-4, 4-3) at McLane Stadium. Baylor is currently a five-point favorite.

“I’m sure you want to know where do we go from here,” Herman said. “We’ve still got a bunch of seniors in that locker room that have bled, sweat and cried for this program. We owe it to be determined to correct the mistakes that were made and do our best to go 1-0 against Baylor this week, a top 25 team and deservedly so.”

There were few actual questions about Baylor and its dynamic quarterback from Lake Travis, Charlie Brewer. Most questions focused on Texas’ disappointing record and the final stages of the Iowa State loss, prompting Herman to say things that triggered even more questions.

As for the fans, Herman said, “We have not played to the level of our expectations. If you’re a fan of us, you probably have very similar expectations. We haven’t met those expectations thus far. They have every right to have that opinion.”

Before Herman took any reporters’ questions, he circled back to Saturday’s post-game press conference in Ames when he was asked if he got out-coached. “I’d never say we got out-coached,” he said after the game, something of a faux pas in the coaching profession.

“I do want to clarify something. Been eating at me for two days,” Herman said Monday. “I had taken that to be were we fooled or tricked, duped or whatever it is. And I didn’t feel that way. When you lose a game, any game, you’re out-coached.”

To make it clear, Herman said, “Anytime you lose a game, you’re out-coached. From player execution, that’s our job to get them executed well. To play calls. To tendencies, you name it. All of it is on us.”

Herman recapped Texas’ final possession that went three-and-out both with reporters and on the Big 12 conference call.

Texas led 21-20 and got the ball back at its own 15-yard line with 4:01 remaining. The Horns had shown an excellent ability the last two seasons to run the ball, eat up clock and secure victory. Not this time, though.

Quarterback Sam Ehlinger appeared to botch a zone read handoff on first down. He was dropped for no gain. Then Keaontay Ingram was stuffed for no gain on second down. This shouldn’t have been a surprise as UT’s run game went nowhere all day. The Horns finished with 54 yards on 26 attempts — netting 2.1 yards per carry.

“On first down, we should’ve had an extra blocker and we didn’t block it properly,” Herman had said on the Big 12 call. On second down, the Horns added an extra blocker “thinking we could gain an advantage there and again had a miscommunication.”

On third-and-10, Herman called for a tunnel screen to Devin Duvernay, an All-American talent who somehow got ignored by the Biletnikoff Award selection committee. A dozen semifinalist names were unveiled Monday, but the committee skipped the UT receiver with 1,017 yards and seven touchdowns.

Anyway, Duvernay dropped the pass, and frankly, it’s not clear he would’ve made the first down marker anyway. Texas punted it away and, thanks to multiple players jumping offside on Iowa State’s fourth-and-5 field goal attempt, never got the ball again.

“Had we thrown three incomplete passes and let 30 seconds run off the clock,” Herman told reporters, “I’d be answering a lot harder questions than I am right now.”

Ehlinger said last week the key to stopping any offense is to shut down its running game. Iowa State’s defense had a terrific game plan where Ingram said they “loaded the box.”

“It was a confluence of things,” Herman said. “If everybody was on the same page from a communication standpoint, a guy missed his block. If four guys made their block and one guy was not on the same page, then we had an issue. Or, we would block it perfectly and the back would hit the wrong hole. It was a lot of things.”

Offensive line coach Herb Hand spent the entire offseason training his players at multiple positions, so it shouldn’t have been that big a deal. But for the Longhorns to have these kinds of issues in game 10 sounds like a clear coaching issue.

“Everything’s a coaching issue,” Herman said. “Having two guys in there in the starting lineup for the first time all year were playing those positions I think did affect a little bit I think the uniqueness of the defense.”

Herman said “a level of human nature” kicks in when players get frustrated. “You start pressing. Those are all things that can derail the run game,” he said.

All Herman and the Horns can do now is press forward.

“Losing is embarrassing. Nobody wants to lose,” Herman said. The seniors will want to finish the year strong, as Herman said, against “two in-state opponents” Baylor and Texas Tech. Both love kicking the Horns when they’re down.

“If you can’t get motivated for that,” Herman said, “you’re probably playing the wrong sport.”