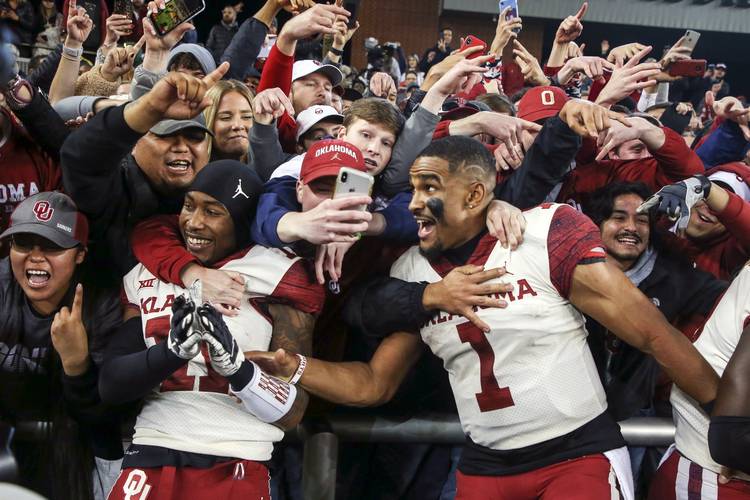 Oklahoma cornerback Parnell Motley, left, and quarterback Jalen Hurts celebrate with fans after their 34-31 win over Baylor Saturday. With the win, the Sooners reclaimed the top spot in the American-Statesman's Big 12 Power Poll. (Ian Maule/Tulsa World via AP)

The Sooners dominated the second half against Baylor to remain in the College Football Playoff picture. Quarterback Jalen Hurts is the most dynamic player in the country when he takes care of the football. The maligned Oklahoma defense played fantastic in the second half to allow the Sooners enough possessions to complete the comeback.

A Matt Rhule coached team lost a fourth quarter lead for the first time in 40 games. The Bears looked poised to ascend into the College Football Playoff picture at halftime. That same squad looked overwhelmed by the moment in the second half. It was a learning lesson for a program still a year ahead of schedule.

The Cowboys are quietly building a strong season in Stillwater. Oklahoma State is on a three-game winning streak, which is currently the longest streak in the Big 12. Quarterback Spencer Sanders is a dynamic player growing up each week, while Chuba Hubbard leads the conference’s most consistent rushing attack. Bedlam should be fun.

Iowa State held serve at home against Texas, needing a last-second field goal to beat the Longhorns. Head coach Matt Campbell has now beaten every program in the Big 12 during his tenure at Iowa State. The Cyclones are four points from being 9-1. Oklahoma State is the only team to beat Iowa State by more than a field goal.

Year three under Tom Herman is not going to plan. The Longhorns seemingly figured out how to play some defense just in time for the offense to sputter. Conservative play calling in the first half and in the final offensive possession of the game will be talking points heading into a clash with Baylor.

Kansas State was upset by West Virginia when quarterback Skylar Thompson was intercepted in West Virginia territory late in the fourth quarter. That’s two straight losses for the Wildcats. One more win would secure a solid bowl game.

The Horned Frogs took a step toward bowl eligibility with a road-win over Texas Tech. TCU needed four field goals to get it down, illustrating the underlying problems for the offense. TCU needs a win over Oklahoma or West Virginia to clinch a bowl game and earn some much-needed extra passing time for a group of young quarterbacks.

Crazy endings in the Big 12!

First-year head coach Neal Brown earned a signature conference win by knocking off Kansas State. Games against Oklahoma State and TCU remain for a Mountaineers squad with an outside chance of reaching six wins and a bowl game.

Kansas is the only team in the Big 12 that is mathematically eliminated from a bowl game. The good news: Help is on the way with Kansas set to sign its best recruiting class in more than a decade.