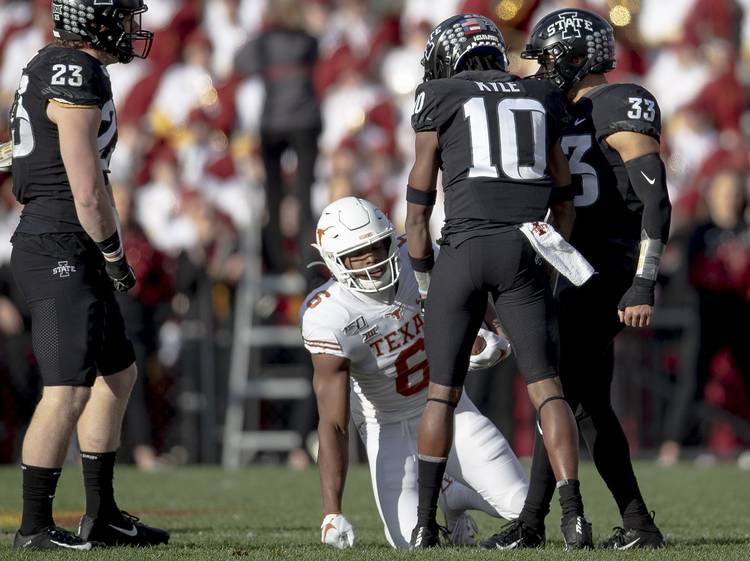 During his weekly availability with the media on Tuesday, Texas senior Malcolm Roach got emotional while speaking about the adversity faced by his recruiting class over the years.

“People telling us not to come here. People telling us your coach is going to be fired within a year. All types of things,” the defensive end and team captain recalled. “Like I said, this 2016 class, the ones that (are) still here, we’ve been handling adversity since the first day we stepped on campus. It’s nothing new to us and we’re going to continue to handle it the same way we always do.”

After Iowa State dealt Texas a 23-21 defeat last weekend, the Longhorns now are facing a new form of adversity. That loss was UT’s fourth this season. After each of the previous setbacks, UT coaches and players were able to insist that the team’s goals were still obtainable. That rallying cry may fall on deaf ears now, however.

Texas (6-4, 4-3 Big 12) entered the season as the 10th-ranked team in the AP’s preseason poll. The Longhorns, however, have not been a contender for a spot in the College Football Playoffs since the middle of October. And while Texas has not technically been eliminated from a spot in the Big 12 championship game, Roach concedes there is only a “1, 2% chance that we can make it.”

On Tuesday, players insisted that the team still has goals.

Senior receiver Devin Duvernay, who had previously espoused that not reaching the conference finale would be a failure on UT’s part, said Texas’ newest goal is to win its next game. Roach noted the Longhorns can still play as hard as possible. Defensive tackle Keondre Coburn leaned on the team’s longstanding motto of going 1-0 each week.

Going 1-0 means besting Baylor in Waco this weekend. The Bears are coming off their first loss of the season, but the team is still 9-1. Nationally, Baylor ranks 26th in scoring offense (34.9 points per game) and 24th in scoring defense (20.5).

“We’ve just got to go win a game,” senior center Zach Shackelford said. “Baylor’s next on the schedule, so that’s all we’re worried about.”

When asked what the team’s goals are now, quarterback Sam Ehlinger went a little deeper. Ehlinger said he needed to keep the Longhorns focused over the final games of the season. He said this was imperative for the team’s present and future.

“We’ve got a lot of seniors that have been through a lot in this program, and it would be unfair to them for people to think ‘Oh well, we haven’t performed to the level that we should, so I’m just going to give up,'” Ehlinger said. “It’s really important for the younger guys who have a lot of football left at the University of Texas to continue to develop and get better.”

Texas has won four straight games over Baylor. Three of those have been decided by seven points or less. Last season, Baylor had three pass attempts into the end zone from the Texas 17 in the waning seconds. Those throws all fell incomplete in the Longhorns’ 23-17 win.

This week, the Bears opened as a five-point favorite. After the loss in Ames, Texas safety Chris Brown told his teammates that this week will be a character check for the team.

“It’s easy to be a man when you’re winning or when you’re in a position of power. When you’re down and out, that’s really who defines who you really are,” Brown said. “We’ve got to just be cohesive as a team, come together and finish what we’ve started.”

The Dotted Line: Guide to watching Texas commitments in the area round of the playoffs