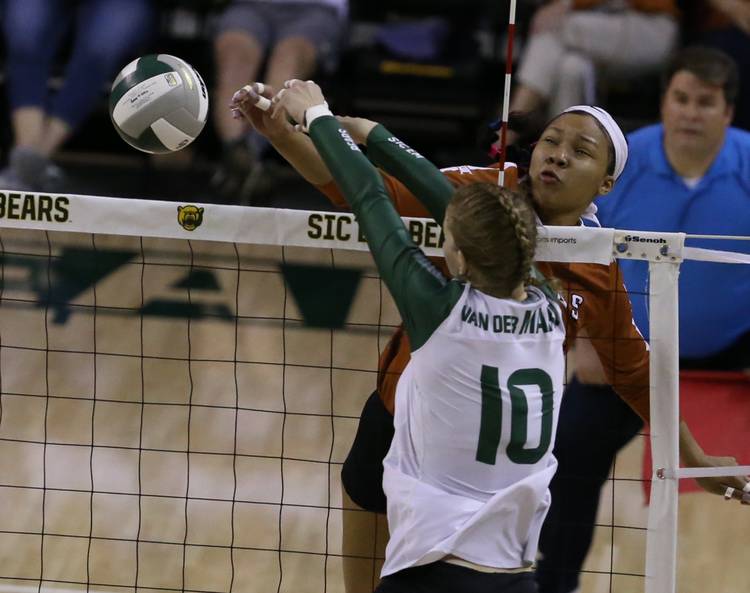 WACO — At a press conference on Monday, Texas coach Jerritt Elliott warned against looking too much into his volleyball team’s sweep of Baylor in October.

Elliott surmised that nerves had gotten the best of the Bears that night while the Longhorns had played extremely well. Texas also had the comfort of playing in front of its home crowd. In short, Elliott told reporters to expect a “completely different matchup” when Texas visited Waco in a few days.

On Wednesday night, a different matchup — and result — was indeed found in Waco.

“They passed a lot better, they executed a lot better. There’s a reason (why) they’re No. 3 in the country,” Elliott said. “At the end of the day, we just couldn’t score.”

The first set belonged to Pressley, who was responsible for 10 of Baylor’s 14 kills and nine of the defense’s 25 digs. The set featured 11 ties, but Texas was often playing from behind and never led after squandering a 9-8 advantage. Texas hit .116 in the opener, its second-worst showing in 42 Big 12 sets.

A seven-kill effort from Pressley boosted the Bears in the second session. Texas nearly saw a 21-15 lead slip away in the third set, but two late kills from Micaya White held off UT’s hosts. In the fourth frame, Texas rallied from a 23-21 deficit behind two blocks tied to freshman Skylar Fields and a White kill.

Pressley, who registered 82 swings on Wednesday night, led off the finale with two kills. It was a three-kill spurt from freshman Kara McGhee that gave Baylor control of the match, though. After Baylor took an 8-4 lead, Texas never got closer than two points. The Longhorns lost White, a three-time All-American, to cramps midway through a set that was sealed by UT’s 16th service error.

Sophomore Logan Eggleston led Texas with her 18 kills while White added 17 kills. Texas outhit Baylor .194 to .182, but the nation’s leader in hitting percentage had not been held under .245 before Wednesday. After the match, Elliott also took issue with UT not executing on hustle plays during the first two sets.

“I really do give it to them, I think they played an amazing match. Everything was going well for them,” Eggleston said. “I think we can just go back into the gym and start really focusing on all those hustle plays and all those little plays and the little points that really added up in the end.”

Texas has Kansas and Iowa State left on its schedule while Baylor must play Kansas State, West Virginia and TCU.  If the two teams avoid any slip-ups, the Big 12 will split its championship between Austin and Waco. Texas has won seven of the Big 12’s last eight titles. Baylor has never finished better than second place in either the Big 12 or Southwest Conference.

Wednesday’s win may be the exclamation in Baylor’s bid for a top-four seed in the NCAA Tournament. Texas, meanwhile, may now have to explain its three losses to the selection committee. In addition to their lofty spots in the AVCA poll, Baylor and Texas currently rank first and second in RPI.

“There’s a lot of volleyball left to be played,” Elliott said. “All we can do is take care of our business on Saturday and take care of Kansas and focus on our last match.”

Notes: The announced crowd of 7,357 was a record for a volleyball match at the Ferrell Center. The previous high had been the 3,878 drawn for a match earlier this season against Tennessee. … The 16 service errors were a season-high for Texas. … Longhorn setter Jhenna Gabriel had 45 assists and 15 digs. … Texas will honor its five seniors and former Longhorn Blair Westerlund, who medically retired in May, following Saturday’s home match against Kansas.

12 big things about Big 12 basketball, Week 3 — What will be national perception of Texas after this week?