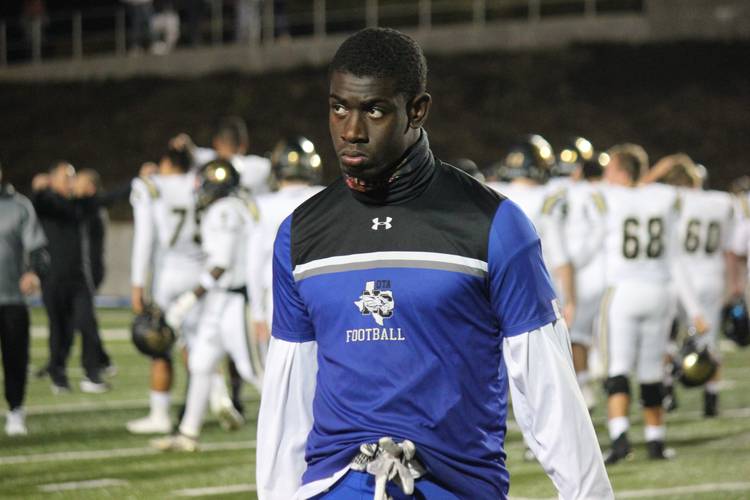 NEW CANEY — The 2019 season unexpectedly ended last Friday night for New Caney’s Derrick Harris Jr. The four-star outside linebacker pledged to the Longhorns back in August to focus on high school football. New Caney went undefeated in the regular season and won another district crown. Harris and his teammates couldn’t get past Richmond Foster in the bi-district playoffs, however.

Harris doesn’t plan on hanging his head. The future is now, and he hopes the offseason going into his senior season is as fruitful as his jump from having been named newcomer of the year in his district as a sophomore to its potential defensive MVP as a junior.

“I felt improved at understanding what offenses are trying to do. I also improved as a pass rusher,” Harris said after the loss. “I want to improve in my coverage skills before my senior season, and to be a better leader and teammate.”

The 6-2, 215-pound defender is one of seven juniors pledged to the Longhorns. The 2021 class ranks fourth in the nation and first in the Big 12 despite the recent de-commitment of four-star wide receiver Quay Davis. The 2020 class lost three commitments in a two-week span that began in October. Harris was recently on campus for the Kansas State win with fellow 2021 commit Jalen Milroe. The duo seems focused on the future at Texas rather than the current record.

“I’m still committed to Texas,” Harris said. “Jalen and I were just hanging out and we’re ready to get out there and put on a show.”

Harris is the No. 14-ranked outside linebacker in the 2021 class, ranking in the top 170 overall in the nation as a prospect. He’s a long, rangy defender who projects to outside linebacker or defensive end. The likely destination is B-backer unless the defensive scheme changes before Harris arrives on campus.

“I don’t care too much about the win-loss record of the team. I’m still another season away from being on campus, so I know that things can change,” Harris said. “I just want to see how the team comes together during hard times like this.”

Not all players grow up loving the football program picked in the recruiting process. Harris was able to achieve a life-long dream when the Longhorns offered him in the summer. His relationship with Milroe helped, but Harris was destined for Texas from a young age.

“Vince Young winning a championship at Texas is one of my first real football memories,” he said. “I’ve loved Texas since. Why wait to pick a school when you know where to go? It felt right and I love the coaching staff.”

Joseph Ossai is a player Harris watches. Ossai was a defensive end with a similar build to Harris back in his prep days at Conroe Oak Ridge. Depending on how Harris’ body develops, the two could share a similar transition from high school to college since Harris spends most of his time rushing off the edge.

“Ossai plays hard. He cares,” Harris noted. “Texas allows its linebackers to do a lot of things. I like the scheme.”

Four of the seven 2021 commitments remain in the state playoffs following the exit of Harris and Juan Davis in the first round. Lake Travis tight end Lake McRee is out for the season with an injury.

12 big things about Big 12 basketball, Week 3 — What will be national perception of Texas after this week?