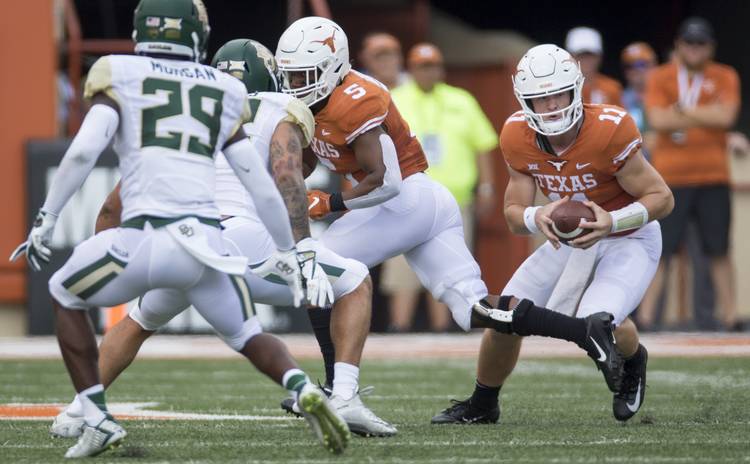 This week’s notable Texas football number is 4 — the jersey number worn by sophomore cornerback Anthony Cook. Cornerback Kobe Boyce has only four tackles this season, though his five pass breakups lead the team. On four occasions in program history has a Longhorn rushed for 300 yards, and D’Onta Foreman last accomplished that feat during a 2016 game at Texas Tech.

Four also represents the number of passes that junior quarterback Sam Ehlinger has completed against Baylor during his college career.

Baylor is one of the few schools that hasn’t gotten a heavy dose of Ehlinger since he arrived in 2017. Sidelined by a concussion, Ehlinger missed UT’s 38-7 win in Waco in 2017. Last season, he started but his day was ended by a shoulder injury suffered on the game’s 10th snap. (Since Ehlinger was the starter in the 23-17 win, he is credited with the victory even though the game was scoreless when he exited).

By far, Baylor is the Big 12 school that Ehlinger has the least amount of experience with. He has completed at least 50 passes against four other conference rivals. Over four games against Oklahoma, Ehlinger has connected on 92 of his 148 attempts:

Ehlinger’s injuries over the past two seasons have robbed Austin-area fans of an intriguing showdown in the Texas-Baylor game. Ehlinger is a 2017 graduate of Westlake. Baylor junior quarterback Charlie Brewer won a state championship at Lake Travis, which is Westlake’s biggest rival.

Ehlinger and Brewer have really only faced off once. Ehlinger was a three-year starter at Westlake, but Brewer was Lake Travis’ varsity backup in 2014. Injuries then kept Ehlinger out of most of the two wars waged by Lake Travis and Westlake in 2016. In 2015, Brewer did throw for three touchdowns in a 35-14 win Westlake and Ehlinger.

Brewer, whose grandfather and father both played at Texas, came off the bench against the Longhorns in 2017. Last year, he started for the Bears at Royal-Memorial Stadium. In his two appearances against the Longhorns, he is 37 of 66 for 421 yards, one touchdown and one interception.

This season, Brewer has completed 66.8% of his passes, thrown for 2,532 yards and been picked off five times. He has 18 touchdown tosses and nine touchdown runs. He ranks 19th nationally in passing efficiency, and his  mark of 156.5 trails only Oklahoma’s Jalen Hurts in the Big 12.

“Obviously, he’s been a huge reason why Baylor’s had success this year,” said Ehlinger, who has thrown for 2,914 yards and accounted for 32 touchdowns. “I’m excited to be able to compete against him in college. I haven’t gotten that opportunity. It will be fun to see him again and talk to him after the game.”

The Austin area can claim four quarterbacks who have earned playing time for one of the state’s FBS-level teams this season. In addition to Brewer and Ehlinger, Wimberley’s Jordan Weeks (UTSA) and St. Andrew’s product Evan Marshman (Rice) also have logged passing attempts.