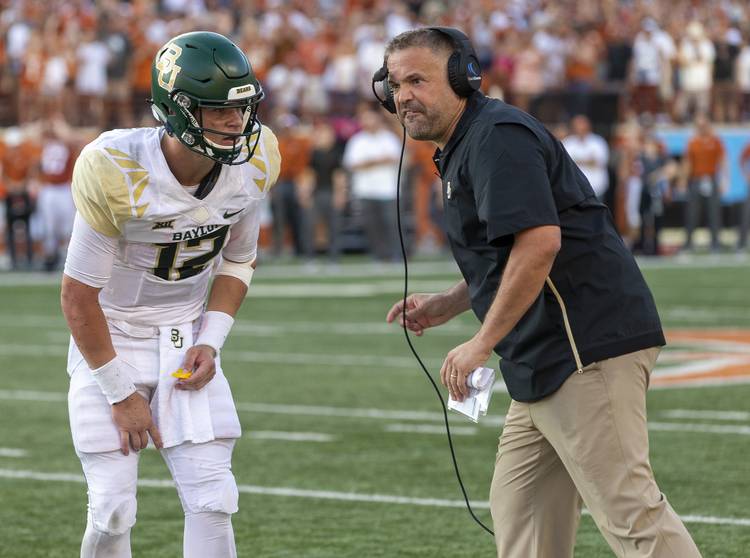 Matt Rhule is bucking a trend of early recruiting. Baylor is standing pat during the season and betting on the current results paying off come December. It’s a bold play in modern recruiting. Most programs are trying to fill up early. Baylor holds only 13 commitments with a month before the early signing period. Gutsy, for sure, but that’s Rhule.

“It won’t be a huge class,” said Colt Barber of Sicem365.com. “Baylor got those 13 guys early and pushed pause on recruiting to let the season play out. Rhule bet on himself and that Baylor would be in a position to get better recruits after the season than it could over the summer.”

Rhule looks right. He took a job in 2016 that most coaches didn’t want to touch. He was tasked with rebuilding the Baylor brand, on and off the field, while competing on the recruiting trail with the biggest programs in the nation. Texas is ground-zero for recruits. Rhule is hopeful that his wait-and-see approach to senior film helps nab prospects who weren’t considering Baylor before the season.

A closer look at the upcoming schedule of official commitments tells the story. According to Barber, the Bears are set to host Fabulous 55 members Malik Hornsby and Alfred Collins in December. Baylor wasn’t a player in either of those recruitments heading into the season. The 9-1 record is turning some heads.

“The proof is right there in the results,” Collins said. “There is obviously something right going on at Baylor and I want a chance to see it for myself. They’re definitely in play.”

Don’t expect Baylor’s class to crack the top 20 and match the rankings for the football team. Baylor can’t sign a full 25-man class in 2020 because the roster is full. It’s a young team that Rhule built by signing big classes in his first two years, plus taking transfers to help build the roster quickly.

“It’s a unique approach to recruiting,” Barber said. “Rhule thought it could be a good year on the field, so he wanted to wait on senior evaluations for those last spots.”

Baylor’s class ranks 64th in the country and last in the Big 12. Don’t expect it to stay that way through December when the Bears’ coaching staff presses the pedal on remaining targets. The class is headlined by Pflugerville Connally cornerback Jahdae Barron. The four-star is one of the growing numbers of Austin-area talent on the Baylor roster. The team’s best player is Round Rock’s James Lynch, who was Rhule’s first recruiting visit when he arrived in Waco. Lynch wasn’t offered by the Longhorns. The starting quarterback is Lake Travis’ Charlie Brewer. Baylor also signed Round Rock Cedar Ridge wide receiver Jaylen Ellis in the 2019 class.

“The thing Baylor is doing is finding talent to fit their system. They know it is impossible to go recruit those five-star guys over Texas and Oklahoma,” Barber explained. “Baylor can gain an advantage by finding some overlooked seniors. Guys like James Lynch.”

It’s hard to argue with the recipe. Baylor won’t ever challenge for recruiting titles, but that shouldn’t keep the Bears from competing for Big 12 titles, as we’re seeing in 2019. Baylor became an afterthought after Art Briles was fired. It remained one in Rhule’s first few seasons. With the results on the field, Baylor can now go reclaim the momentum it lost at the end of the Briles era. The recruiting payoff may come in 2021.

“Baylor should be able to recruit a higher caliber of athlete in 2021 because of the success on the field, but the coaches are still focused on the season and the 2020 class. It’s another example of them taking it slow,” Barber said. “They’ll have a junior day in January and that will start the 2021 class. Right now, the priorities are elsewhere.”