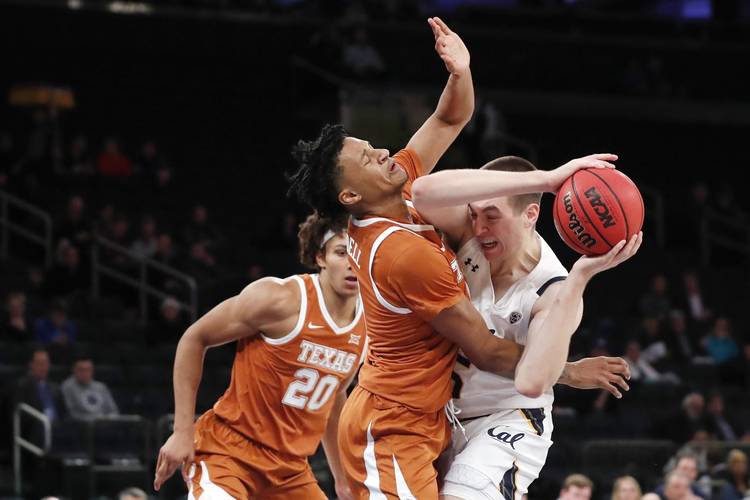 NEW YORK — Matt Coleman III scored 14 points, Jericho Sims had 12 points and nine rebounds, and No. 22 Texas bounced back from its first loss of the season to beat California 62-45 Friday in the 2K Empire Classic consolation game.
A night after falling to Georgetown, Texas (5-1) played in front of a sparse crowd against Cal (4-2), with Madison Square Garden only beginning to fill up late for the Duke-Georgetown nightcap.
Texas never trailed, with Cal tying it just once at 21 on Matt Bradley’s free throws.
The Longhorns led 25-21 at the half and took a 13-point advantage on Kai Jones’ put-back dunk with 12 minutes, 35 seconds left. A put-back dunk by Jericho Sims made it 51-38 with 5:48 left.
Jase Febres added 12 points for Texas. Teammate Courtney Ramey contributed 10 points, six rebounds and three assists.
Coleman had six assists. Sims hit 6 of his 7 shots and added three assists.
Bradley led Cal with 22 points, and Grant Anticevich had a team-high nine rebounds.
Texas hit 41.9% of its shots from the field to 35.6% by the Bears. The Longhorns sank 6 of 24 3-pointers, while Cal hit only 1 of 8.
Classic rematch: The last time the teams played each other, Texas beat Cal 71-55 in the 2K Empire Classic championship game at Madison Square Garden on Nov. 21, 2014.
Poll implications: With the loss to Georgetown, Texas probably cost itself its spot in the Top 25. However, with the win over Cal, the Longhorns should still receive votes.
Big picture: The Longhorns bounced back from their first loss of the season with a win over a Power Five opponent before a week off. … The Golden Bears have lost back-to-back games after starting the season 4-0.
Up next: Texas will host McNeese State on Nov. 30. … California will welcome UC Davis on Tuesday night.