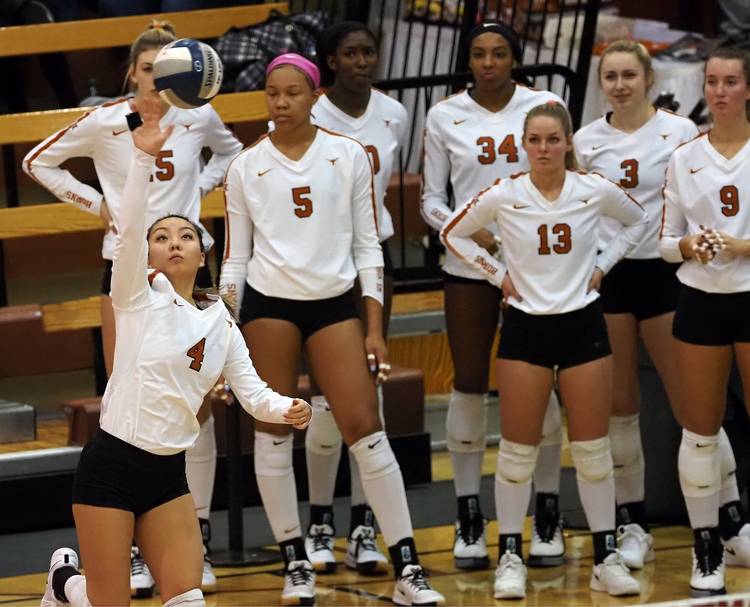 Texas' Claire Hahn (4) serves against West Virginia as the bench looks on during their match on Nov. 3. (Rodolfo Gonzalez/For Statesman)

When Texas volleyball coach Jerritt Elliott pointed to the Longhorns logo on his shirt this week and said, “we’re always the hunted,” his assessment was not gratuitous.

Two days later in Waco, No. 3-ranked Baylor provided supporting evidence, pursuing the top-ranked Longhorns and taking them down in five sets while an announced crowd of 7,357 cheered.

Now Baylor and Texas each have a loss in Big 12 competition, and UT’s senior night on Saturday at Gregory Gym becomes more than a celebration of work well done by the Longhorns. It’s also a time for restoration. The Longhorns (19-3, 13-1 Big 12) have two matches left, against Kansas on Saturday and at Iowa State a week later.

“Every loss we’ve had, we’ve come out stronger and improved drastically,” Longhorns senior Micaya White said. “After the Rice loss, we went on a really good winning streak (14 matches). I’m not super disappointed. Sometimes a team needs a loss to learn from. You’d rather have the loss now than in the (NCAA) tournament.”

The Longhorns still hope to receive a top-four seeding for the NCAAs, which would enable them to play at Gregory for the first four rounds, if they last that long.

Two seniors — White and Claire Hahn — have played significant roles in the success. They will be honored on Saturday along with fellow seniors Riley Fishbeck, Autumn Rounsaville, Orie Agbagi and Blair Westerlund, the latter a former player whose career was terminated by a knee injury.

White, the 6-1 outside hitter with the powerful right arm, is Texas’ big star — a three-time all-America pick.

The 5-5 Hahn, recruited out of Westlake, is a defensive specialist whose experience and maturity helps stabilize the back row when she subs in for opposite hitter Skylar Fields when Fields would otherwise have to rotate to the back. White, the team’s primary outside hitter, has increased her hitting percentage every year, reaching .309 this season after attaining .301 accuracy last year.

“I’m just trying to be more dynamic and aggressive at all times, not playing timid,” said White, a fifth-year senior who has a degree in psychology.

She’s also improved her serve, ranking third in the Big 12 in aces per set while making 25 fewer errors than last year. During a victory over Kansas State on Nov. 13, she held serve for four straight points in the second set and then seven in the third. She had four aces during the three-set sweep.

White attributes her improvement to positioning.

“I switched sides of the court,” White said. “Last year I served on the left side, this year we switched me over to the right side.”

Elliott said there is more to it than that.

“Her toss, her rhythm, her hand contact,” he said. “She can make a lot of adjustments now. Last year I don’t think she was making as many adjustments to poor tosses. Sometimes you do get a poor toss with this aggressive serve.”

Hahn has improved in serve reception, and she has provided versatility. Elliott deploys her as a setter when he replaces the undersized, 5-8 starter Jhenna Gabriel with one of the available middle blockers as a blocking sub in the front row.

That’s how Hahn, a setter as a freshman and sophomore in high school, had 10 assists against Kansas State.

Texas, the 2012 national champion, advanced to the NCAA semifinals the next four years, reaching the finals twice. The Longhorns lost in the regional finals in 2017 and ’18.

White and Hahn say this year’s team is more qualified to make a run.

“We do a really good job of staying calm in high-pressure situations,” Hahn said.

The Dotted Line: Baylor’s Rhule playing it slow on the recruiting trail, but betting on himself

Horns back in win column after rolling over Cal