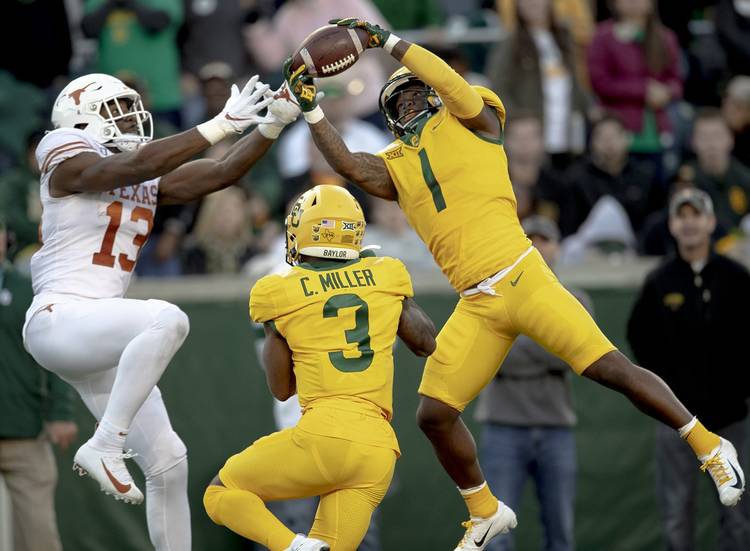 Revisiting our five pregame questions that were facing the Longhorns ahead of Saturday’s 24-10 loss at Baylor. How they played out:

1. Did Texas get its running game back on track?

The running game really was on track for only one play, and even Keaontay Ingram’s 68-yard burst at the very end of the first half came at a price. It set Cameron Dicker up for a 48-yard field goal, but Ingram also came up limping and was held out of the second half with an injured ankle. The final numbers say Texas averaged 6.2 yards per carry and produced one rushing touchdown, but keep in mind that the average is inflated by that one Ingram run and the touchdown came with one second left in the game and the score 24-3.

2. Did Devin Duvernay make Baylor pay for his Biletnikoff snub?

The catches were there — Duvernay was targeted 11 times, caught 10 passes and finished with 78 yards — but the impact wasn’t. Take out his 29-yard catch in the third quarter, and he had gains of 3, 8, 6, 6, 2 and 6 yards plus a loss of 5 yards to go along with 12- and 11-yard gains in the fourth. Duvernay, ranked second in the country in receptions heading into Saturday, didn’t make the list of 12 semifinalists this week for the Biletnikoff Award.

3. Did turnovers become a storyline for the Texas offense?

Sam Ehlinger was picked off early in the fourth quarter, killing what was a promising Texas drive and the Longhorns trailing 21-3. The Longhorns committed only 11 turnovers all last season but have given the ball away 13 times this season. Ehlinger has now thrown seven interceptions in the last five games. Baylor has forced 22 turnovers this season.

4. Did the defense limit the big plays?

Small consolation because in the end, it was still a 24-10 loss. But take away Chris Platt’s 44-yard catch and run to open the game — and you can take it away, because it ended with D’Shawn Jamison forcing him to fumble it away — and Baylor never really burned the defense with a big gainer. John Lovett scored on a 28-yard touchdown run, but there weren’t any busted coverages or blow plays in the secondary like we saw in Ames. Denzel Mims, who finished with 125 receiving yards, had a long catch of 26. This was the first game the Longhorns haven’t given up a 50-yard play since the win over West Virginia.

5. Was this game decided in the final seconds?

This game was decided in the third quarter, when the Bears produced a couple of touchdowns and the Longhorns sputtered. There was a Texas touchdown in the final seconds, though; Daniel Young scored from 4 yards out with one second left in the game, turning a 24-3 blowout into a 24-10 win. The Longhorns had won four straight games over Baylor, with three of those decided by six points or less.

Texas-Baylor notebook: Ingram breaks off a long run, but then leaves with injury