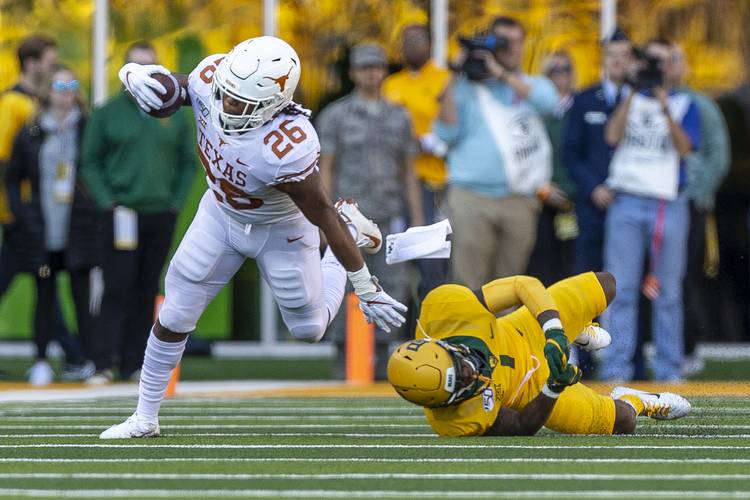 WACO — Any momentum created by one of Texas’ longest runs in years on Saturday quickly faded.

Texas running back Keaontay Ingram left the 24-10 loss to Baylor with an ankle injury. He was injured at the end of a 68-yard run at the end of the first half. He’s scheduled to to have a MRI on Sunday, Longhorns coach Tom Herman said.

Texas faced a 7-0 deficit in the second quarter when a punt by Issac Power was downed at the Texas 2. With 18 seconds left, Texas played it safe and  handed the ball off to Ingram. The sophomore, however, found a hole in the line of scrimmage and weaved his way through the Bears’ defense until he was finally stopped at the Baylor 30.

Keaontay Ingram with the BIG 68-yard run for @TexasFootball 💪 pic.twitter.com/2MVlcREvV0

Ingram’s run was UT’s longest since D’Onta Foreman’s 74-yard gain at Texas Tech in 2016. Ingram did not appear to be injured after the play, but he was seen limping toward the locker room as Texas and Baylor traded timeouts. His teammates soon joined him after Cameron Dicker hit a 48-yard field goal to close the half.

It was announced just before the second half kickoff that Ingram would not return. Playing from behind in the third and fourth quarters, Texas ran 14 times for 79 yards. Only four of those carries went to a running back.

On UT’s final offensive snap, junior Daniel Young scored his first touchdown since the third game of the season. That four-yard run capped a five-play, 55-yard drive. With five seconds left, Texas called a timeout to set it up.

“I’ll never give up. I’ll never quit,” quarterback Sam Ehlinger said. “If my team has the ball, I’m going to do everything in my power to put the ball in the end zone.”

Temporarily ejected: In the fourth quarter, Texas personnel escorted left guard Parker Braun to the locker room after he was flagged for an unsportsmanlike penalty.

Braun, a graduate transfer from Georgia Tech, later returned to the sidelines after it was explained that he had not been ejected. Herman said an official had initially motioned for Braun to leave. The official, however, only wanted him to get off the field for one snap.

Even though he was not ejected, Braun did not play again. After the game, Herman said that “nobody talks to the refs except for me.”

Braun was not the only Longhorn who was penalized in the fourth quarter. The play before Braun was flagged, center Zach Shackelford was called for a personal foul. Derek Kerstetter, another offensive lineman, later drew an unsportsmanlike conduct flag.

Shackelford insisted that he was just playing to the whistle on his penalty. When asked about all the penalties called on the linemen, the senior captain did concede that “we’ve just got to clean it up.”

His head coach was more succinct.

“Obviously there in the fourth quarter, to lose our composure was ridiculous, unacceptable,” said Herman, who team had a season-high 104 penalty yards. “It will be dealt with punitively, I can assure everyone of that.”

Texcetera: Receiver Collin Johnson (hamstring) and defensive back B.J. Foster (neck) did not play.  Like Ingram, sophomore safety DeMarvion Overshown also injured his ankle during the 14-point loss. … Legendary UT basketball coach Jody Conradt was recognized between the first and second quarters. She’s a Baylor graduate and was inducted into the school’s Wall of Honor this weekend. … After a 10-catch performance, Devin Duvernay sits 19 receptions shy of Jordan Shipley’s school record of 116.