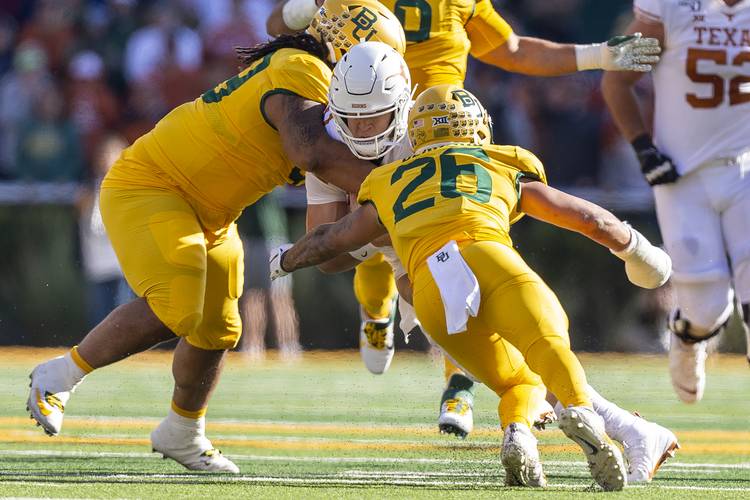 Texas quarterback Sam Ehlinger (11) gets wrapped up by Baylor linebacker Terrel Bernard (26) in the first half of an NCAA college football game on Saturday, Nov. 23, 2019, in Waco, Texas. [Stephen Spillman for Statesman]

WACO — What an improbable celebration Saturday night at McLane Stadium.

As glittery gold fireworks exploded overhead, the gigantic scoreboard in the south end zone flashed the best sort of news for the sellout crowd. The 14th-ranked Bears, with their 24-10 victory over Texas, qualified for next month’s Big 12 championship game.

It’ll be the first title game in program history. The Bears had won consecutive league crowns in 2013-14, but that was during a stretch when the Big 12 didn’t put on a championship game.

Baylor coach Matt Rhule sent his 19 seniors on a lap around the stadium to high-five the fans at home for one final time. It’s a scene that plays out on senior days in late November across the country. But the scene was unusual for this reason — when the season started in the late August heat, few but the most buoyantly optimistic believed Baylor would be in this spot when the year ended.

Two years ago, when Matt Rhule took over the program, the Bears won no games at home and only one in all. A season ago, the Bears won the final regular-season finale against Texas Tech to even qualify for a bowl game.

“This game, this win, was two years in the making,” said Rhule, his voice raspy from a cold he’s had the past two weeks. This was “two years of process, two years of one day at a time, two years of grind.”

So far, the only stumble of the season was last Saturday’s last-second loss to Oklahoma.

Maybe the lone negative of the game was the injury of quarterback Charlie Brewer, who sustained a hit to the chest and head in the fourth quarter. He was helped off the field, but he put his helmet back on in an attempt to return to the game. He was told to stay put.

Rhule said that Brewer, who completed 16 of 25 passes for 221 yards and a touchdown and rushed for 75, was celebrating with the rest of his teammates after the game. But he said he had no other update.

Baylor finishes the season with a road game against Kansas next Saturday. It might not matter if Brewer plays against the Jayhawks.

The win over Texas was about control and domination.

The Longhorns scored only twice — a 48-yard field goal on the final snap before halftime, then a 4-yard touchdown from tailback Daniel Young with a second to play in the game.

Rhule said his defense was disappointed that they’d allowed the late touchdown. Otherwise, this win would have challenged for the biggest margin of victory over the Longhorns since 2011. That was back when Robert Griffin III was making a spectacular case for his future Heisman with four touchdowns and the defense forced six turnovers in the Bears’ 48-24 win.

The defense sacked Sam Ehlinger five times. Ehlinger completed 22 of 37 passes for only 200 yards. Defensive end James Lynch, who starred at Round Rock High School, sacked Ehlinger twice. Lynch, a junior, broke the school career record for sacks. He has 19 so far, 10.5 for the year.

“It’s a team effort,” Lynch said,  “And we didn’t let them do what they wanted to. We got ahead of them and they starting throwing. It gave us a lot of opportunities as a DL to start rushing.”

The Bears have 38 sacks for the season. They were leading the league coming into the game.

The Longhorns also had no answer for Baylor receiver Denzel Mims, the senior who caught seven passes for 125 yards and a touchdown.

Mims signed with Art Briles in 2016. He played for Jim Grobe in the transition season between Briles and Rhule. He was a reserve on the one-win team in 2017, then has dazzled since then.

He’s experienced every sort of emotion a program can have, good and bad.

“I knew we’d get here, eventually,” Mims said. “Two years ago we were young and we didn’t have that much experience. But I knew if we kept grinding and kept coming to play every day that we’d get here eventually.”