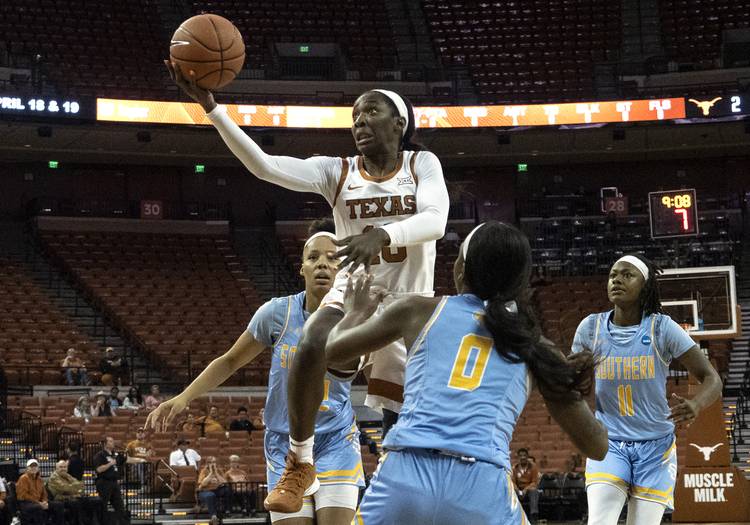 On Sunday afternoon, Texas quickly checked off one of the last things on its to-do list before a trip to Hawaii.

Senior Joyner Holmes and sophomore Charli Collier outscored Southern by themselves in Texas’ 93-39 victory at the Erwin Center. In the 54-point drubbing, Texas scored nearly one-third of its points in the first quarter.

Up next for Texas (3-2) is this weekend’s Rainbow Wahine Showdown in Honolulu. UT will play North Carolina State, North Texas and host Hawaii.

“Our chemistry, we’re coming together; we’re playing really well,” Collier said. “Today was eye-opening for me. It was like, we can really do this.”

Texas put up 30 points in the opening quarter and exited the 10-minute session with a 17-point lead.

UT turned the basketball over five times in the opening quarter, but those miscues were offset by stellar shooting. The Longhorns missed just one of their 11 first-quarter shots and knocked down all eight of their free throws. Collier, who is 6 feet 5, and Holmes, who is 6-3, each scored eight points against an undersized Jaguar team. Additionally, sophomore guard Joanne Allen-Taylor hit two 3-pointers.

“The last few games, we’ve just been trying to stress to start off a little bit quicker,” Holmes said. “I think we started off pretty well and carried it over to the second half.”

Over its first four games, Texas had averaged 11.8 points in the first quarter. Against South Florida, UT shot 3-for-13 in its first quarter of the season. The Longhorns then had 5-for-23, 5-for-16 and 6-for-13 performances in the opening quarters of home games against UTSA, Arizona and UT Rio Grande Valley.

“I think the players know that’s my philosophy is to try to get out of the gates pretty quick and first three or four minutes, really try to set a tone,” said UT coach Karen Aston, who was pleased with her team’s early substitutions. “I thought that we did that today.”

Texas built a 46-19 lead by halftime. In the second half, Southern never got closer than 27 points. Celeste Taylor’s putback of her own miss with 2:39 remaining gave Texas its 86th point and a season-best score.

Holmes led the Longhorns with 27 points, a career-best total, and grabbed 10 rebounds. Collier scored 24 points and had 16 rebounds.

“These two were good,” Aston said of her frontcourt. “They were really good, and they should be. They have an advantage, but they used it today.”

Holmes and Collier have both recorded double-doubles in all five of UT’s games this season.  Texas had 10 double-doubles in the entire 2018-19 season. No Longhorn had more double doubles than Holmes, who had four.

Nneka Enemkpali set a UT record when she had double-doubles in six straight games during the 2012-13 season.

Free throws:  Southern, a member of the Southwestern Athletic Conference, did not have a player with more than six points. Three of Southern’s four losses have been to Iowa State (69-36), Nebraska (73-39) and Texas. … Allen-Taylor, a freshman guard, chipped in 12 points for Texas. … Aston said reserve forward Shae Routt was limited to three minutes of playing time because she was hit in the nose during the game.