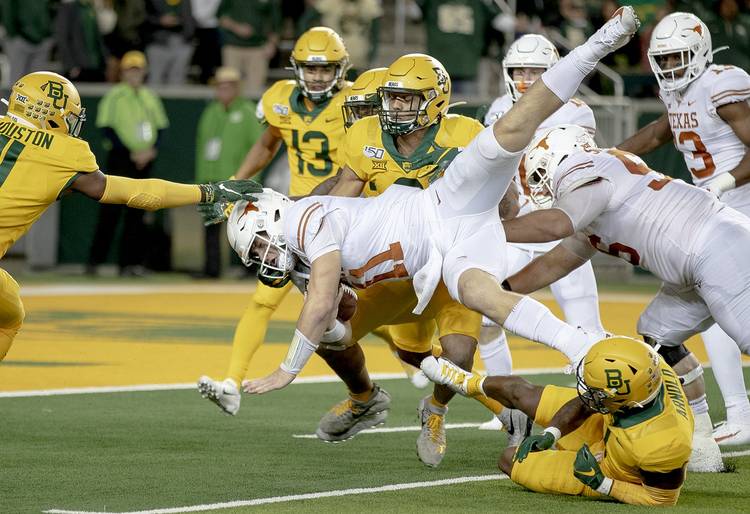 It’s easy to dismiss the matchup as meaningless. But if the Longhorns (6-5, 4-4 Big 12) somehow stumble and lose, they’re open to the possibility of finishing with a losing record.

This season was not derailed by injuries. In summation, Texas is an undisciplined team with a vanilla offensive scheme that others have figured out. It’s got a defense with a three-man front that raises real questions about its effectiveness. The special teams are so-so.

And it has a coach signed through 2023 with at least a $20.4 million buyout. Tom Herman isn’t going anywhere.

It’s been quite a yearlong round trip back to the land of mediocrity.

“We’ve got one game left in DKR for the seniors,” Herman said after Saturday’s 24-10 loss to Baylor. “And I’ll be damned if any of us throw in the towel, because those guys deserve much more for everything that they’ve done for this program since we’ve gotten here.”

Texas fans will not get the answers they seek this week, either.

Herman will not answer questions about the coaching staff at his weekly press conference. He will not address what sort of offensive or defensive philosophical changes Texas will make during the offseason.

Frankly, Herman might not know the answers himself just yet. Those are questions that can only be answered when the season is over and coaches can look ahead.

In this specific moment, Herman and his staff have a short week to prepare for the 4-7 Red Raiders, who already know they’re not going bowling.

“I’ve done a poor job. The buck stops with me,” Herman said Saturday. “And so we’ll evaluate everything. We got a game in six days. I’m not going to comment about anything like that until after the season.”

The Sugar Bowl seems a lifetime ago. The Longhorns have an offense that gets more ineffective by the week. They rank last in the Big 12 in sacks allowed (32) and ninth in penalty yardage per game (68.4).

The defense has actually steadied itself in the past few weeks, but this unit is still on track to finish with the third-worst average yards per game in school history (444.1).

Quarterback Sam Ehlinger passes on questions about the offense. After each of the last two losses, Ehlinger was asked about his unit’s steady decline. “That’s a great question. I don’t know,” he said Saturday.

What’s more egregious are the blatant mental mistakes. For the second straight week, Texas defensive players jumped offside on a critical fourth-down play. They are drawn by a hard count, something the Iowa State deep snapper figured out two weeks ago.

This team went half the season with negative punt return yardage. Take away senior Brandon Jones’ 53-yard punt return against Kansas State, and the Horns would still be underwater in that category. Texas has 46 total punt return yards in 11 games.

Against Baylor, UT linemen Zach Shackelford and Derek Kerstetter both got flagged for 15-yard penalties in the fourth quarter. Guard Parker Braun was flagged for unsportsmanlike conduct after talking back to referee Mike Defee. Herman said Braun will be dealt with “punitively.”

“Nobody talks to the refs except for me,” Herman said. “That’s been made very clear throughout our time here.”

It’s not a team with internal strife, it would appear. Jones, a team captain, said there is no disconnect between the coaching staff and the locker room.

“Obviously there’s stuff we have to correct as a team, but I think Coach Herman brought to this program just a definition of finishing,” Jones said. “The season’s obviously not over yet. We still have one more game to play and whatever bowl we end up being in.”

Winning on senior day is a nice sentiment. It gives seniors such as Jones, defensive end Malcolm Roach and receiver Devin Duvernay a nice send-off.

Don’t expect senior receiver Collin Johnson to play in his final UT home game. Johnson missed yet another game Saturday with his hamstring injury. He should start looking ahead to the Senior Bowl and his NFL future.

Still, for a handful of Longhorns, playing for pride is a powerful motivator.

For Herman, figuring out how to fix things next season is motivating, too.

“I think just for all the seniors’ sake,” Jones said, “for all the stuff we’ve been through, being our last time playing in DKR next week, I think we just need to find a way to pull together.”