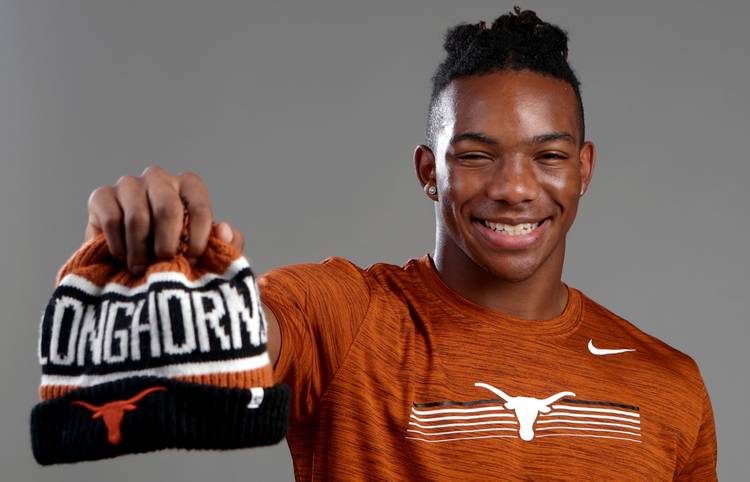 CHANDLER, Ariz. — As one door closes, another one opens.

But Robinson’s playing days as a Longhorn have just begun. Door open.

“It’s a blessing to have that,” Robinson said of his future in Austin.

“It’s been great being with (my high school) team. They’ve helped me get to Texas and get this far. It’s a blessing to be going to the college level and playing up there.”

But how — and why — exactly did Robinson choose Texas?

“What coach Drayton has done in these past years — he’s a big reason why I chose Texas,” Robinson said.

“How he is as a man and how he loves the Lord and serves God with everything — that’s what drove me over to Texas. That’s what I think for other kids; find the right fit for your coaching staff and then for yourself.”

Robinson is also regarded by some in Arizona as perhaps the greatest running back prospect to ever come out of the state. The five-star recruit is Arizona’s all-time leader in career rushing yards with 7,036.

He totaled 8,440 all-purpose yards over his high school career, 7,673 of which came over the past three years. The running back surpassed the 2,000-yard rushing mark in each of those three seasons, the last of which included nearly 400 receiving yards. As a senior, he averaged more than 250 all-purpose yards per game.

Robinson is not content with just making it “over there,” either. He wants to take full advantage of his opportunity to play at the college level, and not just on the football field.

“I want to progress as a man and as a player, then everything will take care of itself,” Robinson said of what he wants to accomplish in Austin.

“I know Texas is in the struggle right now, but I just have to keep working hard for myself, and then when I get up there, put in as much work as I did here.”

Unfortunately for Texas fans, they will have to wait until after spring ball to see Robinson hit the practice field for the first time. The future Longhorn will not be able to make the move to Austin until the summer due to his high school’s policy that does not allow for early graduation.

But that didn’t stop Robinson from sending a message to the Longhorns faithful.

“I’m a great person — I know football speaks for itself — I can do a lot of things on the football field,” he said.

“But off the field — how I handle myself and how I’m a loving person for everybody — that’s what they should know about me.”

Before packing for Hawaii, Texas starts strong in rout of Southern