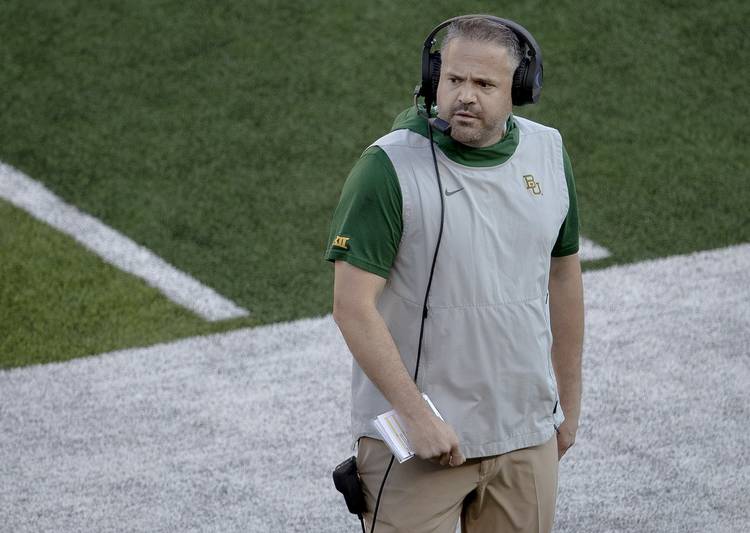 Baylor head coach should be in consideration for national coach of the year honors. Baylor's win over Texas kept the Bearsat No. 2 in the American-Statesman's Big 12 Power Poll. [Nick Wagner/American-Statesman]

Quarterback Jalen Hurts accounted for each of Oklahoma’s four touchdowns in a sloppy victory over TCU. The Sooners can still reach the College Football Playoffs, but it’ll take a few breaks plus style points in wins. Oklahoma is presented with two ranked teams to finish the season with Bedlam followed by a rematch with Baylor for the Big 12 title.

Baylor clinched a berth into the Big 12 championship game by thumping the Longhorns in every phase of the game. Matt Rhule should be the national coach of the year for turning around this Baylor program during a dark period. Rhule said he plans on remaining in Waco, and that’s great news for Baylor fans.

Running back Chuba Hubbard carried an injured Oklahoma State squad past a feisty West Virginia program. Oklahoma State was without freshman quarterback Spencer Sanders, and it’s unclear whether he’ll return for the contest against Oklahoma. The Cowboys have quietly won four straight games, which is currently the longest streak in the Big 12.

The Cyclones almost fell victim to Les Miles’ Kansas squad, but a four-touchdown performance from quarterback Brock Purdy saved Iowa State from an embarrassing home loss. Iowa State can reach eight wins in a relatively disappointing season with a victory over Kansas State. The pieces are in place for a run in 2020.

Kansas State beat Texas Tech on the road with a formula straight from Bill Snyder. The Wildcats relied on special teams, a strong defense and timely passing from quarterback Skylar Thompson to jump up a spot in the Big 12 Power Poll.

Chaos is sure to ensue in Austin after the early signing period with Tom Herman needing to make changes following a disappointing 2019 season. It looked like every flaw was exposed in Waco. Texas’ offense was overwhelmed for the second consecutive week. The phrase “transfer portal” might become a familiar one for the Longhorns faithful.

TCU nearly pulled off an upset at Oklahoma. Gary Patterson’s squad needs a home win against West Virginia to reach bowl eligibility. This program needs those practices to propel the offense into 2020 with some momentum.

The outside hope of reaching a bowl game was dashed by Kansas State. The Red Raiders could build momentum in the offseason by closing the year with a victory over a fragile Texas squad.

Neal Brown helped lay a solid foundation for this Mountaineers program moving forward even if the results in year one don’t reflect much improvement. A win over TCU on the road would give Brown and his staff the momentum it needs on the recruiting trail.