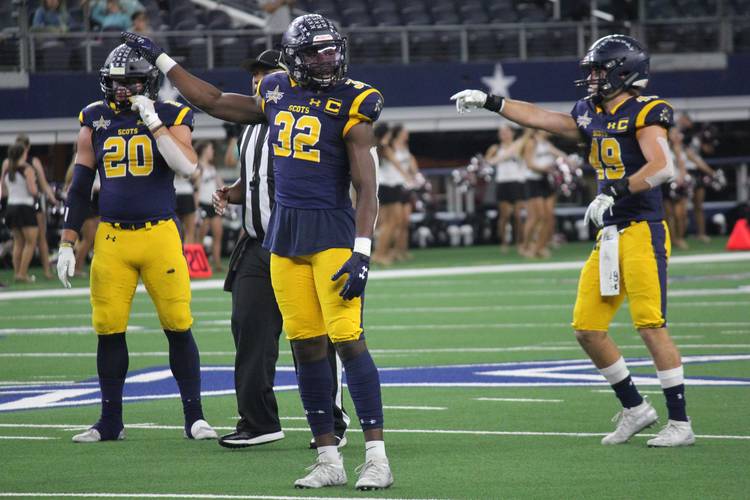 ARLINGTON — One defensive commitment that Texas fans don’t need to sweat down the stretch to the early signing period in December is Highland Park’s Prince Dorbah. The state’s premier pass rusher emphatically affirmed his pledge to the Longhorns as he and his teammates hope to make another run at a Class 5A Division I state championship.

“I’m committing (to Texas) no matter what happens,” Dorbah said last Thursday. “My mind is on winning a state championship and then it’ll turn to Texas. They showed love like no other school did. They always wanted me and checked on me as a person.”

Texas lost three defensive commitments in the month following the loss to Oklahoma. Dorbah, a four-star outside linebacker, said he and his fellow commitments got together and cleared the air with the entire class. The message was simple.

“We told the commitments that if you don’t want to be here, leave right now,” Dorbah said. “We’re trying to build something special and we only want guys on board.”

Dorbah is a 6-2.5, 215-pound defensive playmaker. It’s hard to put a label on his position. He plays all over the field for Highland Park as a senior after spending his first two years on varsity concentrating on defensive end. Texas likes him as a B-backer because of his pass rushing ability. He registered 30 sacks in his past two years combined.

“It helps to play multiple positions. It allows me to play fast and it makes it harder to double-team me,” Dorbah said. “As a team, we live for these moments. It was a great experience to play at AT&T this early in the playoffs.”

Dorbah picked Texas because of the relationships and consistency.

“Texas did a great job recruiting me since my sophomore year. They never let up,” he said. “Relationships are huge.”

“Prince is long and has a ton of potential,” Allen said. “He’s one of the best edge rushers around. He’ll chase people down and he’s a leader. He earned being captain. He disrupts the backfield and leads us in so many categories.”

Allen’s love and respect for Dorbah extends beyond football.

“He’s a great person who has been through a lot in his life,” Allen continued. “Football is his place to shine. He has so much character and he’ll do great in life.”

Dorbah picked Texas in July after taking one official visit, which was to Austin in June. The four-star is happy with his choice of schools, but he’d advise young prospects to take more time and enjoy the process.

“One thing I did not do is enjoy it. Take some pressure off and enjoy it,” Dorbah said. “Take visits and enjoy it. Don’t get lost in the facilities, but find a place that fits you best. There’s a lot of great places out there.”

He does hope future classes of Dallas-Fort Worth talent follows him to Texas.

“Dallas is my home. I wanted to stay in Texas,” Dorbah said. “We have a lot of great athletes in this state and we should stay home.”

Dorbah plans to sign in December and enroll in Texas next summer.