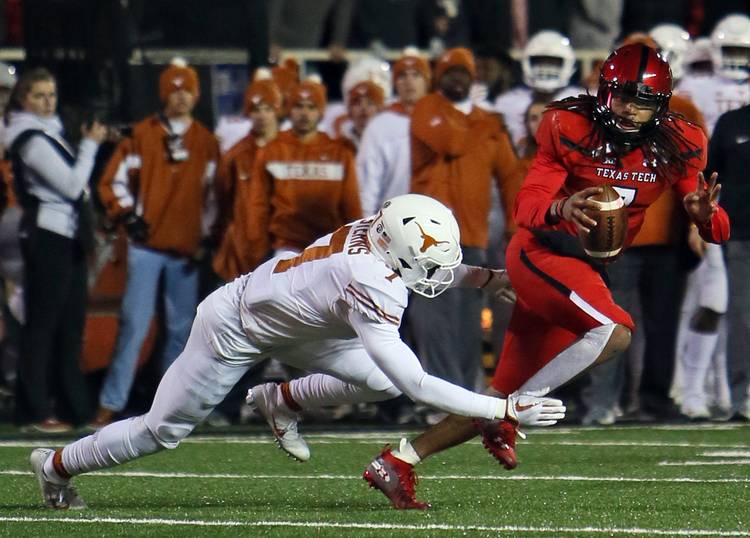 This week’s notable number is 78 — the jersey number assigned to junior offensive lineman Denzel Okafor. Since it has allowed 78 points, the second quarter is the second-worst quarter for the UT defense (Texas has surrendered 134 points in fourth quarters). In its history, Texas has returned 78 interceptions for touchdowns.

Seventy-eight also represents the number of plays that Texas Tech is averaging per game in 2019.

Technically, the Red Raiders are snapping the football 77.5 times per game. That’s the most in the Big 12.

On Tuesday, Texas safety Brandon Jones and linebacker Joseph Ossai correctly assumed that Texas Tech would be the quickest-paced team on UT’s schedule. For what it’s worth, non-conference foes Louisiana Tech, LSU and Rice are averaging between 63.7 and 72 plays per game.

Jones added that the Longhorns are expecting the Red Raiders to run a play every eight or nine seconds. Defensive coordinator Todd Orlando later put that number at 12 seconds.

“Being able to go that fast gets a lot of defenses tired and then they basically take advantage of it from there,” Jones said. “They’ve always been the air-raid type, getting the ball out and having really good receivers.”

To prepare for the Red Raiders, Ossai said the Longhorns have run more during this week’s practices. Orlando has also installed quicker-pace simulations. During practices, the scout team offense has been given a script of four plays to run in succession without a break. After the first-string defense goes through that sequence, the Longhorns’ backups have been subjected to the same drill.

“You’ve got to be mindful, especially with a short week, that you don’t crush our guys. Then all of a sudden, it like we know how to get lined up but we’ve got no legs going into this game,” Orlando said. “That’s all you can do is just practice it.”

Texas Tech is averaging 474.6 yards and 31.1 points per game. Those totals respectively rank fourth and seventh in the Big 12. The Red Raiders have recorded nine 50-yards plays, and cfbstats.com has that as the 22nd-best total in the country.

On the flip side, Texas is allowing 444.1 yards and 29.4 points per game. The Longhorns enter this weekend with the Big 12’s third-worst scoring and total defense. Texas has yielded eight plays of 50 yards or more.

This will be the Red Raiders’ first trip to Austin under Matt Wells, who spent the past six seasons at Utah State. Orlando worked as Wells’ defensive coordinator there from 2013-14. He didn’t think that familiarity will be a big factor for either sideline.

Texas owns a 51-17 lead in its all-time series with Texas Tech. Each of the past four games — including last year’s 41-34 thriller in Lubbock — have been decided by eight points or less.