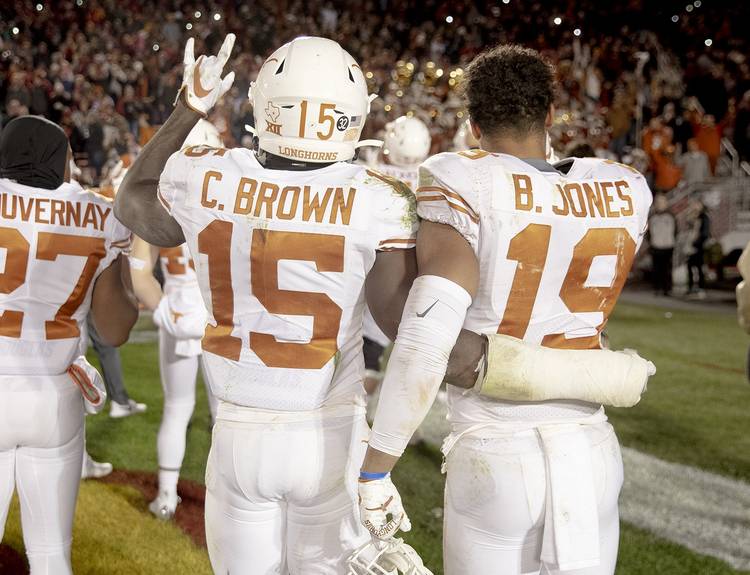 Texas defensive backs Chris Brown (15) and Brandon Jones (19) hold up the "Hook 'Em Horns" sign for the playing of "The Eyes of Texas" after losing 23-21 to Iowa State in Ames, Iowa two weeks ago. Both players were part of UT's 2016 recruiting class; Jones will play his final home game on Friday. [NICK WAGNER/AMERICAN-STATESMAN]

Brandon Jones’ first game at Texas was certainly special. The highly-touted freshman from Nacogdoches remembers he was on special teams that night against 10th-ranked Notre Dame.

“It was loud, super loud,” Jones said this week, recalling the 2016 season opener. “It was insane, especially when (Tyrone) Swoopes ran it in for that touchdown to win the game. That’s probably the loudest I’ve ever heard DKR in my time here.”

Everyone believed the Longhorns, who zoomed from being unranked to No. 11 in the next Associated Press Top 25 poll, were headed in the right direction. “Texas is back, folks!” ESPN’s Joe Tessitore screamed.

That 50-47 win in double overtime was supposed to be the moment Charlie Strong’s program took flight. “I think that’s what everybody thought. It was a super good confidence builder,” Jones said.

The Notre Dame win was merely a temporary apex. Those freshmen from Texas’ 2016 signing class muddled through a losing season, an embarrassing loss at Kansas and then a coaching change. Then the Horns went 7-6 in 2017, powered their way to a Sugar Bowl victory in 2018 and have now fallen back to a precarious moment Friday as this wild roller-coaster ride comes to a stop.

“It’s been definitely a huge journey,” senior receiver Devin Duvernay said. “We had a lot of ups and downs, but it’s just made us who we are. I wouldn’t trade it for nothing.”

The Longhorns had 28 enrollees in the 2016 recruiting class, including names like quarterback Shane Buechele and running back Kyle Porter. Both ultimately transferred out. Poor grades, injuries, bad luck and a lack of talent hampered others.

The school will honor 17 players before Friday’s game, including some who are leaving eligibility on the table to move on with life.

“We haven’t played to our standard. We haven’t coached to our standard, but none of that matters this week,” UT coach Tom Herman said. “Because this week, we owe it to our senior class, who has done so much for this program since we got here to put us in a position to be successful moving forward.”

Football wise, some of these seniors will leave having made some incredible individual plays. Jones made an awesome goal-line stop against USC in 2018. Linebacker Jeffrey McCulloch had a 65-yard interception return to clinch a win at Kansas last season, too.

Duvernay was thought to be nothing more than a straight-ahead sprinter his first three years. Coaches asked him to move to slot receiver this season, and he has turned himself into a 1,000-yard producer with legitimate NFL aspirations.

Center Zach Shackelford enrolled early in January 2016 and became a four-year starter. Defensive end Malcolm Roach was a key figure all four years and played all seven positions on the defensive front for two different coordinators.

Both became team captains. Neither would change anything.

“It just taught me lessons to stay even keel, never get to high or too low,” he added. “Just stay the course of things and you never know how things will turn out.”

What’s funny about Shackelford and Roach is that both were tapped as team spokesmen, and  deep down, neither one really liked it. But they came every Tuesday to meet with reporters all the same.

Asked about the roller-coaster ride, Shackelford said, “I think it’s just kind of the ebb and flow of football. You’re not always going to win, not just games, but you’re going to get hurt. You’re going to mess up. You’re not going to do the right thing here or there. You’re also going to do good things.”

Shackelford admitted he probably wasn’t ready to play as a freshman in 2016, that he probably could have used a redshirt year. But his time was immediate while others had to wait their turn.

“It’s just like life,” he said. “Not everything is going to go your way, and it’s how you respond to those things that inevitable shows your character and charisma and stuff like that.”

As sophomores, this class got a shock to the system with Herman’s arrival toward the end of 2016. He stunned the entire team with a radical offseason workout schedule and separated winners and losers internally. Herman was hired to administer CPR to a program that had flat-lined after three straight losing seasons under Strong.

The 2017 season was big mostly because Texas finished with a winning record and won a bowl game for the first time since 2012. That set the stage for 2018, a year where a senior-laden defense and quarterback Sam Ehlinger led the club to the Big 12 title game.

“One thing I’ve learned, football is just a game,” Roach said. “You have plenty of life to live. My dad always told me that football is a means to an end. You better get everything you get out of football because it’s going to get everything out of you.”

Since this senior class enrolled, the NCAA created the transfer portal, giving players an easy out for those who think they’ll be better off somewhere else. Chris Brown signed in 2016, but redshirted that first season, meaning that he’ll be a senior next year. Brown had to wait for his time, and now he’s become a breakout star at safety.

“I think maturity level is a big deal,” Duvernay said. “A lot of people are young and things aren’t going their way early on, they kind of tend to give up. They just want early success, so they jump out. But see the bigger picture and trust it.”

Without football, Roach said he wouldn’t have been able to get a degree from UT. He’ll finish in May.

Without that uniform, Jones would have never met Jayden, a cancer patient at Dell Children’s Hospital. The two have become lifelong friends, almost like brothers.

“Just to see how positive he was, it really kind of motivated me,” Jones said. “Soon as we were leaving, the doctor told us that he was getting his leg amputated the following day. So I couldn’t imagine what he was going through, so I just decided to reach out.”

Without his collective experience at UT, Shackelford may not be fully prepared for whatever comes next.

“I’m going to miss it,” Shackelford said. “There’s stuff I’ll carry with me for the rest of my life. The good, learn from the bad stuff and hope it makes me a better man, a better father someday. Hopefully 1-0 with the wife. It’s all been good.”