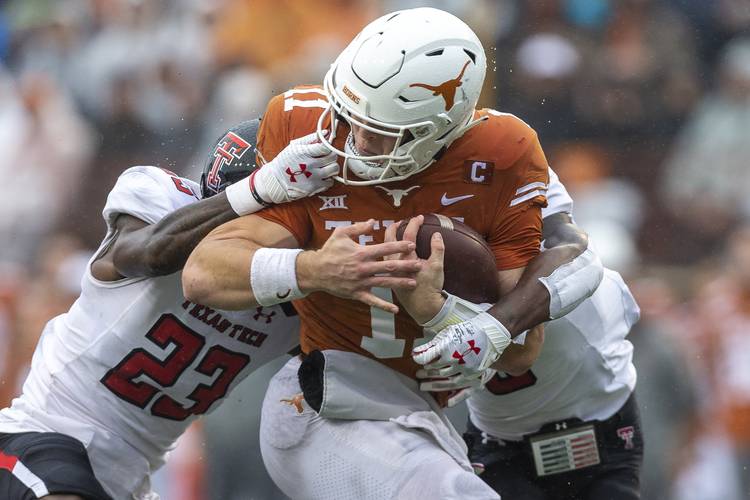 Revisiting our five pregame questions that were facing the Longhorns ahead of Friday’s 49-24 win over Texas Tech. How they played out:

1. Did Texas keep Texas Tech away from Sam Ehlinger?

Ehlinger was sacked early in the first quarter, but that was Tech’s only sack of the game. The Longhorns have allowed a Big 12-high 33 sacks and have only had one game this season without one. Two players — Oklahoma linebacker Kenneth Murray and Baylor lineman James Lynch — have even been named the conference’s defensive player of the week after playing Texas. Led by defensive lineman Eli Howard (4.5 sacks), Texas Tech ranked sixth in the Big 12 with 23 sacks heading into the game. Howard and Adam Beck combined on the one sack.

2. Did Ehlinger feast on the Texas Tech secondary?

As expected, Ehlinger had a big day against the Red Raiders. He was 52 yards shy of becoming the fourth quarterback this season to pass for 400 yards against Tech. Ehlinger was 19 of 27 for 348 yards and two touchdowns before giving way to Casey Thompson for the last drive or two. He did add 83 rushing yards and another score, though. The feasting went both ways. Tech’s Jett Duffey threw it 58 times for 399 yards and a pair of touchdowns, too.

3. How much closer did Devin Duvernay get to Jordan Shipley?

With one game to go, very close.

Duvernay will have to have a big bowl game, however, if he wants to catch Shipley’s school-record 116 receptions from 2009. Duvernay had six catches for 199 yards and a touchdown against Tech, becoming only the third Longhorn in school history with 100 catches in a single season. He now has 103 catches, or 13 away from Shipley. Shipley had 14 games to reach his school record; Duvernay will have 13.

4. Who started at cornerback for the Longhorns?

Jamison was a given, but that other spot was a question mark as Anthony Cook, who has started seven games, was out with a knee injury and Jalen Green was questionable because of a sprained ankle. But everyone got involved on Friday. Chris Brown had nine tackles, which was second most on the team behind Brandon Jones’ 12. Kenyatta Watson II had a key pass breakup in the end zone on a fourth-and-goal play and Boyce had a couple of tackles. Jamison gave up some plays but also made some plays, finishing with a pair of breakups.

5. Which Longhorn had a memorable senior day?

If you had to guess one, it probably would’ve been Devin Duvernay. And he did not disappoint.

Remember when we wondered how Lil’Jordan Humphrey’s production would be replaced when he left early after last season? Duvernay, playing in his final home game, had a sensational day — a team-high six catches for a game-high 199 yards and a 75-yard touchdown that also happened to be his 100th catch of the season. It was the longest touchdown pass of the season for Texas. Malcolm Roach had a sack and a couple of tackles for loss, but the sack was a game-changing play for the Longhorns. And Brandon Jones led the team in tackles. Collin Johnson missed another game because of a hamstring injury.