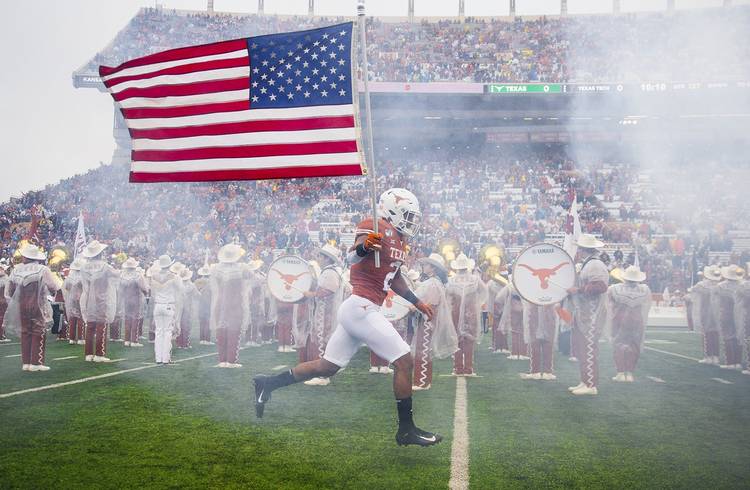 Texas running back Roschon Johnson (2) runs out with the American Flag ahead of a game against Texas Tech in Austin on Nov. 29, 2019. [RICARDO B. BRAZZIELL / AMERICAN-STATESMAN]

His backup, redshirt freshman Casey Thompson, has thrown it 12 times. Even standout receiver Devin Duvernay has completed a pass.

On Friday, Roschon Johnson — the freshman from Port Neches-Groves who signed as a quarterback but was asked to play running back in August — finally got a chance to show off his arm. The Longhorns, who were at Texas Tech’s 18-yard line, went with a trick play for Johnson in the fourth quarter. But he misfired on a pass to Brennan Eagles.

“It felt pretty good even though it didn’t turn out as planned,” Johnson said. “Coach called it up and I was just thinking, ‘Execute it.'”

Sophomore Keaontay Ingram ran twice for 17 yards but reaggravated his ankle injury. With Jordan Whittington and Kirk Johnson inactive, Johnson and Daniel Young were UT’s lone options in the backfield. Johnson rushed for 105 yards and scored on three of his 23 carries. Young converted his eight attempts into 41 yards and a 3-yard score.

The triple-digit performance was Johnson’s second of the season. After a 121-yard game against West Virginia on Oct. 5, he said he wanted to return to the quarterback position after this season.  When asked directly on Friday if he still wants to be a quarterback, Johnson said yes.

“We’re just going to take it game by game,” Johnson said. “When the offseason comes and when the time comes, we’ll discuss everything.”

Next season, Texas will likely return both Ingram, Young and Whittington to its backfield. Five-star recruit Bijan Robinson and West Mesquite’s Ty Jordan are the two running backs committed to UT’s 2020 recruiting class.

Texas moved Johnson to the backfield when Ingram, Young and Kirk Johnson all ended up on the injury report during fall camp. He’s averaged 5.1 yards per carry and has rushed for seven touchdowns. He also has 23 receptions.

“(He’s) an athlete, he’s a baller. Put him at center (next season) for all I care,” said senior Zach Shackelford. “He’ll play well because that’s just his personality.”

Historic catch: The nation’s leader in receptions ahead of Friday’s kickoff, Duvernay moved into elite company on senior day.

Pretty good time for Texas to score on the longest offensive play of the year. A 75-yarder to Duvernay. pic.twitter.com/06a6wXXxUx

One snap after Texas Tech had taken a 28-21 lead in the second quarter, Duvernay beat safety Adrian Frye on a route up the middle. He hauled in a pass from Ehlinger at the Texas Tech 40 and strolled to the end zone.

The 75-yard play was UT’s longest since John Burt’s 90-yard catch against Oklahoma State in 2017. It was also Duvernay’s 100th catch of the season. He joined Jordan Shipley and Kwame Cavil as the only receivers to record a 100-catch campaign in Texas’ history.

How did that trio of receivers enter the 100-catch club, interestingly enough 10 years apart? Cavil and Shipley both did so in Big 12 championship games. Duvernay’s actual 100th, however, was the biggest highlight:

Against the Red Raiders, Duvernay had six catches for 199 yards and a two-point conversion. He missed out on recording UT’s third-ever 200-yard game after a penalty by Marcus Washington cost him three yards and a touchdown on his final catch. Duvernay exited with a shoulder injury, but Texas coach Tom Herman said “he was in god spirits in the locker room. It wasn’t like he was in a sling or anything like that.”

Duvernay’s senior season now consists of 103 catches and 1,294 receiving yards. Only Shipley, who turned 116 receptions into 1,485 yards a decade ago, is looking down on him in UT’s record books.

Texcetera: Junior Marqez Bimage became the fourth Longhorn in the last 20 years to record a sack, forced fumbled and recovered fumble in the same game. … Freshman Jake Smith hauled in his sixth touchdown catch of the season. … A Taylor native, Texas Tech defensive back DaMarcus Fields led all players with 13 tackles.