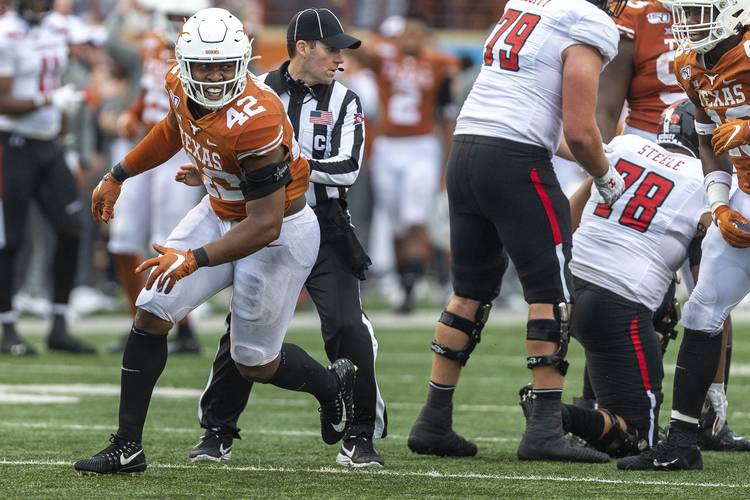 There were 158 snaps taken in Texas’ 49-24 win over Texas Tech on Friday. Here are five that ended up making a big difference:

For the 10th time this season, Texas failed to force a punt on its opponent’s first drive. After the Longhorns punted on their first possession, the Red Raiders put together an 11-play touchdown drive. Five minutes later, Texas Tech scored again on SaRodorick Thompson’s touchdown run.

Texas Tech’s two touchdown drives sandwiched a wasted opportunity by UT’s offense. Trailing 7-0, Texas had a fourth-and-1 attempt at the Texas Tech 24. UT quarterback Sam Ehlinger, however, was stuffed on a quarterback sneak.

The fourth-down failure was Texas’ 11th this season. The Longhorns were 12 of 15 on fourth downs last season and that .800 hit rate ranked second nationally. Texas is 7 of 18 this season, a 39% success rate that ranks 111th nationally.

Trailing 14-0, things got even worse for the Texas offense as a 44-yard run by Roschon Johnson was wiped out by a holding penalty. Then Texas got a much-needed break. Following a 5-yard catch by Johnson, Malcolm Epps hauled in a 36-yard reception.

It was a career-long catch for Epps, a redshirt freshman who recorded his first-ever reception during last year’s trip to Lubbock. The catch moved Texas into Red Raiders territory and Epps drew a pass interference a couple of snaps later. Eventually, Texas cashed in on Epps’ plays with a 10-yard touchdown run by Ehlinger.

Ehlinger’s score was UT’s first first-quarter touchdown since the 50-48 win over Kansas on Oct. 19.

On the first play of the ensuing drive, Ehlinger and senior Devin Duvernay connected for a 75-yard score. The touchdown pass was UT’s longest play since the 2017 season. It was the longest offensive touchdown for Texas since Jacorey Warrick’s touchdown of similar yardage at Kansas in 2016.

That touchdown also had a historic footnote. The catch also was Duvernay’s 100th this season. Duvernay joined Jordan Shipley and Kwame Cavil as the only Longhorns to record a 100-catch season.

Texas held a 28-21 lead at halftime, but Texas Tech opened the second half with the football. On the first drive, the Red Raiders drove to the Texas 18. They kept their offense on the field on a fourth-and-4, but quarterback Jett Duffey was unable to connect with KeSean Carter.

Texas Tech entered the weekend with a 52.4% success rate on fourth downs. On Friday, the Red Raiders were 1 of 4. In the first half, freshman cornerback Kenyatta Watson II successfully defended T.J Vasher on a fourth-down pass from the Texas 1.

With the game getting out of hand in the fourth quarter, Texas defensive lineman Marqez Bimage forced a fumble by Texas Tech running back SaRodorick Thompson. UT freshman T’Vondre Sweat scooped up the football and returned it 11 yards.

The fumble was the second one of the day recovered by Texas. The Longhorns have forced 19 turnovers this season.

That play helped add Bimage’s name to a trivia answer. According to UT, he is one of only four Longhorns to record a sack, a forced fumble and a fumble recovery in the same game in the last 20 seasons. Bimage picked up his sack later in the fourth quarter. He jumped on a fumble at the Texas 26 at the end of the first half.