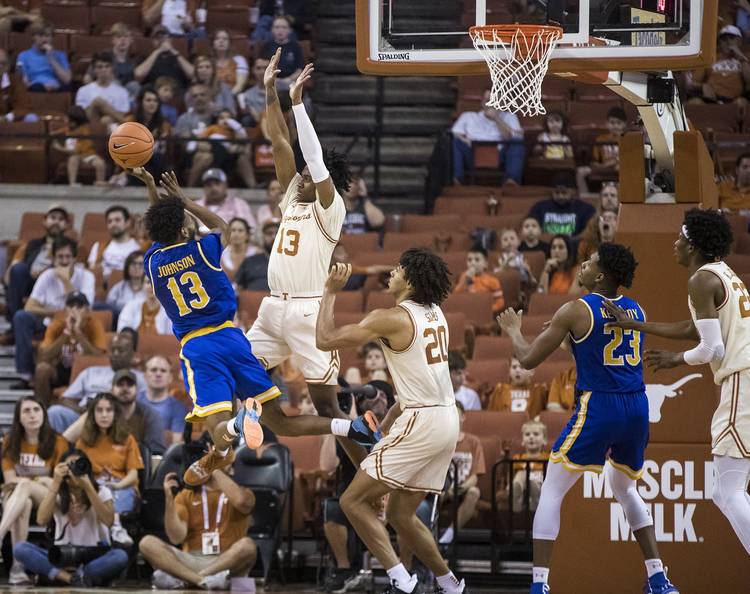 This was not the week to play anyone from the Southland Conference.

Stephen F. Austin, the so-called “little school from East Texas,” took down No. 1 Duke on Tuesday. Maybe that was all the motivation McNeese State needed Saturday at the Erwin Center.

“For sure, we were obviously very excited to play Texas,” Cowboys coach Heath Schroyer said. “You walk into this arena, it’s like coming into a cathedral.”

The little school from Lake Charles, La., almost pulled off another Southland stunner. McNeese State’s Sha’markus Kennedy tied things up with a tough layup, and then Texas’ Jase Febres missed a 3-pointer with 40 seconds left.

Dru Kuxhausen drove on UT’s Courtney Ramey but missed a short jumper, Ramey got the rebound and drew a foul. Ramey hit two free throws with 8.4 seconds left, and the Longhorns escaped with a 73-71 win.

It was one of the more inspired efforts you’ll see from a 2-6 team that never once looked overmatched. “They were an aggressive team,” UT’s Andrew Jones said. “They played with a nothing to lose mentality.”

“At the end, it’s that situation where you have to find a way to win,” Smart said. “We talk a lot about what goes into winning, but it’s a matter of going and doing it.”

Maybe there’s something about playing these non-conference, non-powerhouses in late November. In 2016, Texas lost to UT-Arlington on Nov. 29. Last year on Nov. 30, Smart’s club lost to Radford, a game most UT fans missed because they were focused on the Big 12 football championship.

Shooting wise, Jones believes “eventually, the flood gates are going to open for us.”

“It’s not frustrating,” Jones said. “As long as we got a good look, that’s all that matters. Execute the play properly and get the reps in that we usually make in practice.”

Questions about inconsistent shooting won’t draw iron with Smart. What draws his ire, though, are defensive lapses like those seen in the first half.

There was a stretch in the first half where McNeese State had dunks or layups on three out of four possessions. The Cowboys were just gashing the frontcourt.

Texas’ Jericho Sims had six offensive rebounds and 11 all total. He was a major reason why the Horns had a 38-24 edge on the glass. But Sims and 6-foot-11 Kai Jones must’ve been on a walkabout late in the first half.

McNeese State pulled within four in the final two minutes before halftime. Leondre Washington closed the period with a running 3-pointer, making it a three-point game and giving the visitors a shot of hope.

“Their guards deserve a lot of credit for the way they attacked, but we’re a better pick-and-roll defensive team than that,” Smart said. “That’s going to be addressed, um, urgently tomorrow. That’s going to be something that we’re going to get better at.”

The Cowboys were content to let the Horns shoot over them in the second half. There were plenty of misses to chase down. Ramey got a wild shot to bank in off the glass, giving Texas a 62-59 lead with 4:22 remaining. Still, McNeese State stuck with the zone.

Jones hit a 3-pointer from the right wing, and then Febres finally sank one from the left corner, pushing Texas’ lead out to four. The announced crowd of 8,482 — louder and larger than one might expect given the opponent — was on its feet down the stretch.

“I thought our crowd was terrific in getting behind us and helping us win that game,” Smart said. “You need that. That makes a difference in a couple of points or even more.”

Jones got another 3-pointer to fall in that left corner, giving him 14 points for the day. But here came McNeese again, as Kennedy tied the game at 71-71.

After Ramey made two free throws, Smart called timeout to set up his defense. Schroyer knew his team would have the last possession based on the timing of the game’s final minute.

The Cowboys had shooters in both corners, but Washington read the play and fired one up himself. Alas, not this time.

“We come to a place like Texas and you’ve got a shot to win it, you can’t ask much more than that,” Schroyer said.