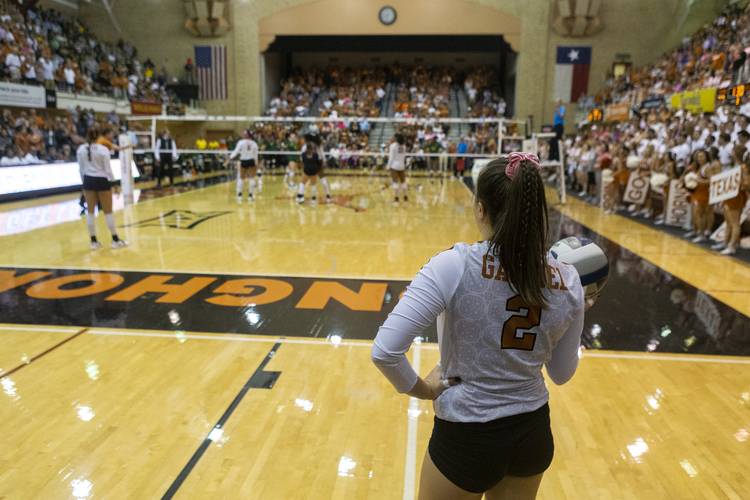 For Texas’ Longhorns, a potential trip to Pittsburgh includes a long layover in Austin.

On Sunday night, Texas was awarded the second overall seed in the NCAA’s volleyball tournament. The Longhorns (21-3) also learned that they will open the postseason with a home match against Albany (16-10) on Thursday night. If victorious, the Longhorns will battle either Texas State (24-8) or UC Santa Barbara (22-5) on Friday.

Should Texas survive the first two rounds, Gregory Gym will host Sweet Sixteen and Elite Eight matches the following week. The Final Four is set to be held at Pittsburgh’s PPG Paints Arena on Dec. 19 and 21.

“We felt like we’d be a top-four seed,” said UT coach Jerritt Elliott, whose team is undefeated at home this season. “In my bracket, I had us three (behind Baylor and Stanford). Now we’re excited to represent our conference and go for it.”

Texas missed out on a top-four seed in each of the last two years. That led to Texas being beaten on the road in the Elite Eight each time. That won’t be the case this year. The Longhorns were joined among the top four seeds by top-ranked Baylor (25-1), No. 3 Stanford (24-4) and No. 4 Wisconsin (22-6).

This past week, Texas was ranked fourth in the AVCA’s poll and third in the NCAA’s RPI rankings. Also working in Texas’ favor as the Longhorns made their case for a top-four seed?

“I think it’s really important that we’ve gotten to play so many really great teams that have made the tournament,” UT sophomore Logan Eggleston said. “It’s prepared us and showed us what we need to work on.”

Up next for Texas is Albany, which won the America East Conference’s championship. Texas and Albany have never played before. In the meet-and-greet between the two programs, Texas will have a home-court advantage.

Texas ranked fifth nationally in average attendance this season. Three of the team’s wins in Austin were sweeps of Baylor, Texas A&M and Minnesota. Texas has won the last 34 postseason matches that it has played in Gregory Gym.

“It’s such a great environment to play in when everyone’s on your side,” Eggleston said. “I’m just super, super pumped, I’m super excited. (Our fans have) been great all season, so I know they are going to show up for the tournament.”

Added teammate Skylar Fields:  “We’re comfortable playing at home and it’s going to be awesome having our crowd here cheering with us and not against us. That’s going to be a huge advantage against other teams.”