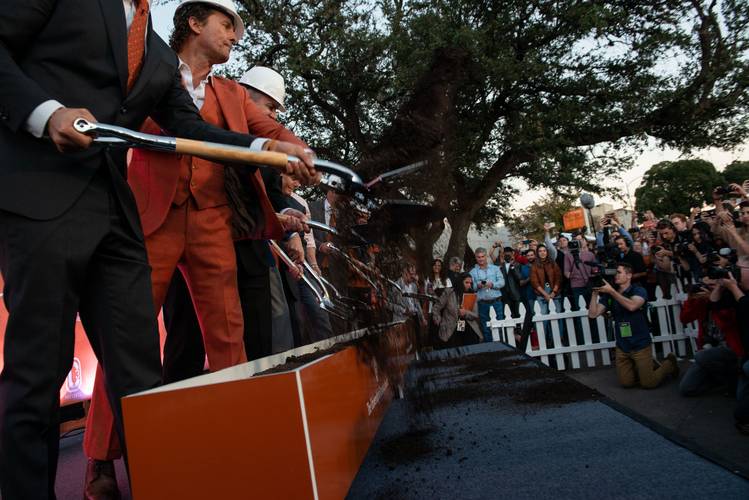 Lot 70 on the Texas campus has never hosted a party quite like the one the university threw for itself Tuesday night. It was more like a send-off really, because within months “there’ll be a 60-foot hole in the ground.”

Texas athletic director Chris Del Conte was in full-blown pastor mode, preaching the burnt-orange gospel about the new Moody Center arena. Free lobster rolls, Torchy’s Tacos and a concert by Moon Taxi will get anyone in the right mood.

“Before we get going, I want to bring one man out,” Del Conte boomed into a microphone in front of about a thousand fans. “President Fenves, can you come here for a moment? Just stand right there. First time I can ever tell the boss where to stand.”

Del Conte made it crystal clear why the Moody Center is one of Gregory L. Fenves’ signature achievements as UT president. Tuesday’s groundbreaking ceremony was a major step in a multi-year journey that’s drawn interest and opinions from just about every major constituency around UT.

Texas officials partnered with the California-based Oak View Group, a private company that will build and operate the $338-million facility that will ultimately belong to UT.

“I sat there and thought we were in Colorado for a moment. You get my drift?” Del Conte said. “Nothing in America happens for free. And I sat there and you think about your wildest dreams. Today, boss, this is about you. You had an unbelievable dream for the University of Texas. You had a vision.”

Maybe it was a tad overboard, but it was all true. Fenves is also the president who reeled in a $130-million contribution from the Moody Foundation, the largest single gift earmarked for UT athletics.

To celebrate, UT athletics and university events collaborated to bring a mini-Bevo Boulevard to the parking lot just south of Mike Myers Stadium. They imported the same concert stage used for Longhorn City Limits and lined food trucks around the perimeter. Bevo XV was there to greet guests at the valet line.

“You, my friend, this is because of you, and I want you to know that’s awesome,” Del Conte said to Fenves on the stage.

Afterward, Fenves just demurred. “Unnecessary. A lot of people worked on this,” he said.

Construction crews aren’t letting grass grow under the feet. A portion of Red River Street on the east side of Lot 70 is expected to be closed later month so construction can begin. The arena is scheduled to be ready for the 2022-23 season.

“We’re getting started more quickly than I thought we’d be able to,” Fenves said. “Things have worked really fast on the planning, the design, our work with the city on Red River, everything has come just like we planned it in terms of scheduling.”

Texas basketball coaches Shaka Smart and Karen Aston were both wearing hard hats during the ceremonial dirt shoveling, as was the “Minister of Culture,” Matthew McConaughey. Smart had to run back across the street as Texas was set to host Alabama-Birmingham.

“When the Moody Center opens, it’s going to be such an incredibly different fan experience to go to basketball games,” Smart said. “We wish that was tomorrow, but I think our administration has done a phenomenal job of making that timetable as fast as it possibly can be.”

OVG has built dozens of pro sports and concert venues all over the United States. But this is the company’s first partnership with a public university.

In an interview after the ceremony, Leiweke said Fenves’ vision was intriguing. McConaughey and concert promoter C3 Presents’ Charles Attal helped sell the idea of using the arena to draw top-notch music acts to Austin. “That reply well determines we’re not going to fail on this thing,” Leiweke said.

Since it was announced that OVG was partnering with Texas, Leiweke said about a dozen other universities have reached out wanting to strike a deal.

“Are there other places that could do this? Maybe,” Leiweke said. “But if you’re going to make a bet, make it here first because it’s the Longhorns and it’s Austin.”

The university still has not released its contract with Oak View Group even though the partnership was announced about a year ago. University and athletic department officials said it was still being finalized by lawyers.

But the university is plowing ahead, comforted by the fact OVG is fronting the money and Texas is getting a new arena at no cost. “We don’t need to spend any public funding or any student or university funds to build this arena,” Fenves told the crowd.

McConaughey, wearing his custom-made burnt orange suit, said the Moody Center needs to have SRO and HCA — standing-room only and a home court advantage.

“Now, we gotta remind that this is going to be a place where we’ll have to agonize defeats,” McConaughey said. “But with your help and support, let’s make this a place we make damn sure we celebrate a lot more Longhorn victories. Hook ’em.”