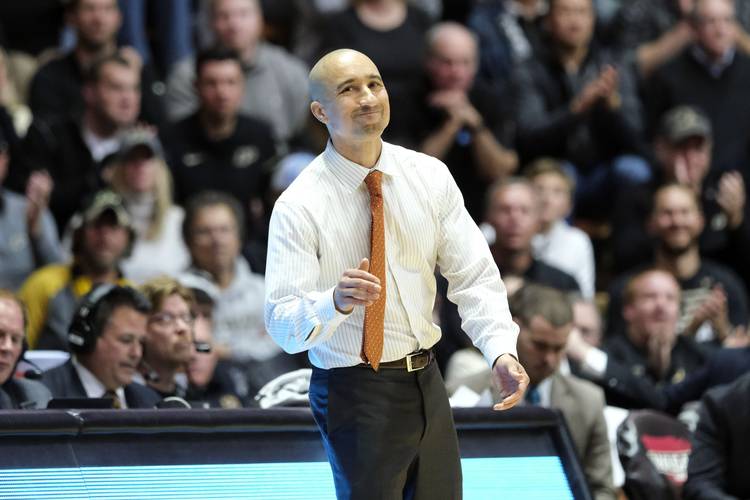 Kansas won one of the best games of the first month of the college basketball season when the Jayhawks beat a phenomenal Dayton squad in the championship game of the Maui Invitational. The two Jayhawk stars, Udoka Azabuike and Devon Dotson combined for 60 points in the game and a third player, Marcus Garrett, scored 18.

Last week I put all three on my list of possible Big 12 Player of the Year candidates, and they all played like it against Dayton.

KU wasn’t the only team deserving of extra Turkey. Oklahoma State and West Virginia won their tournaments in New York and Mexico and beat the likes of Syracuse and Mississippi (OSU) and mid-major power Northern Iowa and Wichita State (West Virginia). OSU and West Virginia are both 6-0. A fourth team, Baylor, won its tournament the week before so that’s four teams who ended the holiday tournament stretch with titles.

But TCU lost to Clemson in overtime to start the week, Kansas State lost to Pittsburgh and Bradley, Oklahoma was non-competitive against Stanford, Iowa State lost to Michigan and Seton Hall in the Bahamas and Texas Tech played its first average team of the season and lost by 11… and then lost again.

Sure TCU, Oklahoma and Iowa State, but half the league was playing in consolation brackets last week.

11. Texas Tech’s schedule, an injury, caught up with them

The Red Raiders won their first five games by an average of nearly 30 points. It was against the third easiest schedule in the country.

Against Iowa, a team that lost by 15 at home to a solid DePaul team, Texas Tech led only once. Iowa isn’t that terrible, ranking in the top 50 at Kenpom at No. 42 to start this week, but the Hawkeyes were picked eighth in the Big Ten preseason poll.

The Red Raiders trailed by as many as 15 and lost by 11 points. Star freshman Jahmi’us Ramsey scored just seven points. Tech shot 16.7 percent from 3-point. The Red Raiders probably can’t survive a shooting game from outside like, say, KU could, because they don’t have a center like Azubuike that can anchor an offense.

Here’s what I don’t know: Was this a throwaway offensive performance? Was this just a funky game where TJ Holyfield scored 4-of-13 from the field and Ramsey 3-of-11? The best player on this Tech team, Davide Moretti, took only eight shots. He made only two.

Those type of games happen, so I don’t know if that’s a trend. But I can’t say for sure until I see Tech play well offensively against teams with better defenses.

Ramsey missed the final 10 minutes of that game with a hamstring injury and hasn’t played since.

Against Creighton, the No. 66-ranked team at Kenpom at the time, Texas Tech played better but lost in overtime, 83-76. Ramsey didn’t play, but the Red Raiders still only shot 43.4% from the field and 26.7% from 3-point.

The Kenpom numbers aren’t terrible for Tech, who started the week at No. 17 defensively and No. 49 offensively. The Red Raiders dropped to No. 28 at Kenpom, and went from No. 12 in the AP poll a week ago to unranked.

Then Texas Tech played DePaul, led by five late in the second half, saw its other freshman, Terrence Shannon Jr., go off and lost again in overtime. It’s not a stretch to say DePaul is the best team Tech has played this season and losing to a team that’s now 9-0 at home isn’t something to be too concerned about.

But they were favored to win, had the lead late and had what looked like the best player on the court in Shannon, who scored 24 points.

Without Ramsey to add more power to the lineup the offense struggles, even when Shannon is playing well in his spot. The Kenpom offensive and defensive numbers have moved that much, offense dropping to No. 57 and defense up to No. 15, but there are plenty of things not to like about how Tech is playing even without an impact player. Moretti isn’t getting the 3-point looks, there doesn’t seem to be a steady point guard play and the Red Raiders, who entered the week as one of the best rebounding teams in the Big 12, got killed on the boards against an active DePaul team.

It doesn’t appear that Ramsey will be out long and I’d be stunned if he’s not playing against No. 1 Louisville next week. This Tech team can become great — you can see it — but not playing good competition to start the season didn’t help them and neither did the injury.

10. Is West Virginia for real?

Digging through the numbers, WVU is No. 34 at KenPom, so they are projecting as a good team this season and the non-conference schedule is ranked 96, which is the third toughest in the Big 12 so far and behind Kansas and Iowa State — the two teams who have played in the toughest tournament/classics.

West Virginia is balanced, which was never the case even several years ago when WVU was one of the best teams in the nation. They rank 40 and 41 on offense and defense, which I always feel is a great sign for a team success because opponents have to worry about both ends of the court.

Freshman Oscar Tshiebwe, a former McDonald’s All-American who was the highest ranked recruit entering the season, has been fantastic. He’s averaging more than 12 points a game, tied with Jermaine Haley for the lead and also leading the league in rebounds per game with 9.7. Sophomore forward Derek Culver is hauling in more than eight rebounds per game and the Mountaineers lead the league in offensive rebounds and are second to Texas Tech in rebound margin.

So, all indicators show WVU is for real. Did you really think Bob Huggins would have a second-straight bad season?

9. Is Oklahoma State for real?

After the Cowboys dismantled Ole Miss last weekend, I received a text asking if OSU was for real.

After the tournament performance, here’s where the Cowboys stood entering the week:

The Cowboys’ schedule is ranked No. 169, which really isn’t as bad as it sounds since the top 100 is mostly filled with mid and low majors grabbing money from bigger schools.

Oklahoma State is doing it with country’s 12th best defense and 50th best offense. Defensively, only Kansas, the AP’s No. 2 ranked team and No. 6 team at Kenpom, is better at No. 8.

The Cowboys are holding teams to just 23% shooting from 3-point and 34.3 from the field, both are the best in the Big 12.

Then OSU played Georgetown on Wednesday and lost 81-74 in a game where they basically trailed all night. Georgetown winning was not something I saw happening this week.

Perhaps it’s a just a funky college basketball thing. All the tests — numbers and eye — suggested Oklahoma State was trending up and becoming a real player in the league, but maybe we need to wait a week before we answer the text back.

8. Player of the Year leader after a month

November is over. We’re a month away from the start of conference season. So who is the early Big 12 POY leader?

As I noted last week, there’s a lot of players who could win. But I think my pick would be the best point guard in the conference I’ve seen who has been one of the most consistent players in the league. But yet he’s far from peaking because it’s clear he can clean some things up.

Kansas sophomore Devon Dotson scored 31 against Dayton in the Maui final. He is averaging 19.7 points and shooting 50 % from the field and 87 % from the free throw line, where he averages 6.5 attempts per game. He was recently named the Big 12 Player of the Week. Yet, while he averages more than four assists per game, he’s turning the ball over almost four times a game, so he has room for improvement.

This is not surprising. Dotson probably could have been drafted last spring and I had him as the second-best player entering the season. But he looks even better this season and still is one of the fastest players in the country and a standout defender.

The Longhorns have started building a new basketball facility.

One thing I’ve always thought was how much the Erwin Center is a detriment to recruiting for Texas. I’m not talking about the fans — I think Texas fans will come out for big games when the team is good.

The most exciting thing about the Erwin Center are the cheap drinks before tip off. The whole building feels like a relic to the 1970s and 1980s, straight down to the old photos of past concerts that line walls.

A new arena eliminates that, and a program that already recruits at a high level will soon have what could be the pearl of Big 12 arenas.

Plus, maybe Matthew McConaughey will come to more than just the Kansas and Oklahoma home games.

Excited to break ground on the Moody Center with Ross Moody and @McConaughey. A game changer for Texas Basketball! 🤘🏽 #HookEm pic.twitter.com/g0xGyIR7W3

We know that Kansas-Villanova should be one of the best games of the challenge, and Texas Tech and DePaul became a big game for both teams given what they did in November and was a great start to the event.

But the sneaky and most intriguing game will be the Iowa State-Seton Hall matchup.

Those two teams play again in a rare non-conference season rematch on Dec. 8 . This time the game has some Hilton Magic pumped into the veins and frankly, you have to like Iowa State’s chances even if it currently holds the most losses in the league with three.

That game could be sneaky good. Here are five other games I’m looking forward to the next seven days.

St. John’s, under first-year coach and former Missouri coach, Mike Anderson are off to a nice 7-2 start. They are 6-1 at home. One loss is to Vermont, who is one of the best mid major programs in college basketball and the other to Arizona State in tournament play.

I just wrote that West Virginia is for real, so hopefully they can go on the road and beat a St. John’s team that has had some success but is still ranked just 98th at Kenpom and played the 344th ranked non-conference schedule.

I’m not explaining this one for you. Also, it’s clear that Kai Jones is the freshman to watch at Texas. He’s been outstanding.

This is just the second ranked team Kansas has played, though Dayton went from unranked to No. 19 after Kansas beat them, so there’s a little misnomer but it is true.

Kansas gets the Buffaloes at home after a lengthy break.

What a terrific game this turned into. If Baylor can secure a win over Arizona, it’ll be another big win for the Bears, who beats Villanova before Thanksgiving. This will also showcase some strong backcourts as Arizona’s strength comes from freshmen standouts Nico Mannion and Josh Green. A third freshman, Zeke Nnaji, is the leading scorer at more than 17 points per game.

My pick: This game is in Waco, so Bears squeak by.

Well, the Jimmy V Classic probably thought they were getting a top-10 matchup, but instead they’re getting the No. 1 team in the country against a Tech squad who has lost three straight games.

Tech has six days to prepare and most importantly get healthy both physically and mentally. However, did you see Louisville rip through a Michigan team who has wins over Gonzaga, North Carolina, Iowa State and Creighton?