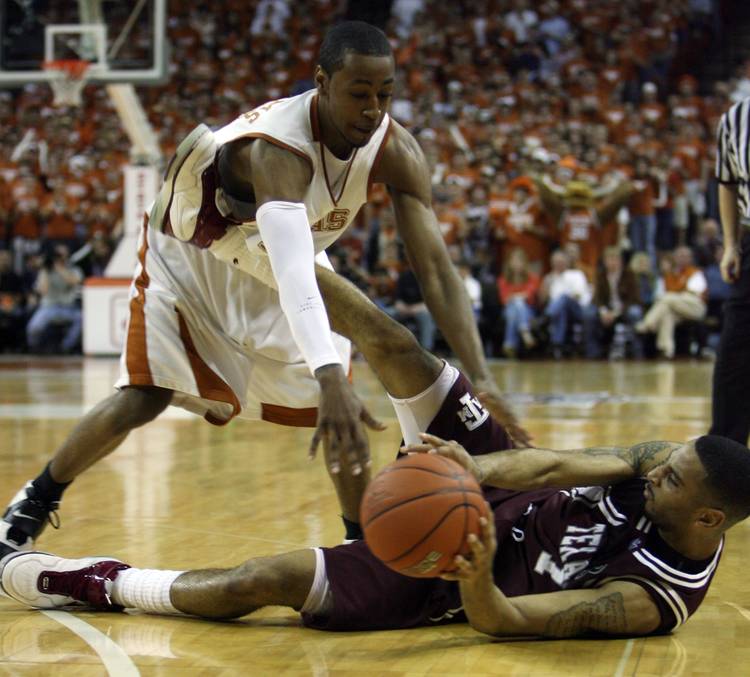 Texas' A.J. Abrams battles Texas A&M's Acie Law for control of the ball during a game against the Aggies on Feb. 28, 2007. Kelly West/American-Statesman

Let enough time pass, and eventually rivals forget what the fuss was all about.

Texas and Texas A&M used to have one of the best rivalries in college sports. Not anymore, though. Egos ruined everything, and now both sides engage in revisionist history.

Both football teams finished 7-5, but you won’t see them meet during bowl season. One bowl executive told the American-Statesman he was told explicitly by the SEC office that a Texas-A&M bowl game “isn’t happening.”

“I don’t think (A&M players) know when we’re swaying back and forth that there’s a reference to t.u.,” A&M men’s basketball coach Buzz Williams said. “I don’t think they know all of that.”

Maybe Sunday’s get-together in Fort Worth is where hope springs eternal. The two men’s teams will play in the new Dickies Arena. Texas (7-1) is off to its best start in five seasons under Shaka Smart while A&M (3-4) is struggling in Williams’ first.

As of now, it’s merely one game, their first official basketball meeting since Nov. 25, 2015. That game was forced by the Battle 4 Atlantis tournament organizers in the Bahamas — staged in paradise, but far, far from home. Hey, at least it’s a thaw.

It’s a far cry from days like in 2007 when Texas and A&M staged one of the most electric double-overtime games ever in Erwin Center history. Kevin Durant, Acie Law IV, big shots, stunning moments, all you’d expect in a rivalry. No. 15 Texas upset No. 7 A&M, 98-96.

“We want to play games that are exciting for people who follow our program,” Smart said. “Obviously, this game falls under that category. So it’s something we’ve talked about over the last few years, playing this game. And this year, it came to fruition.”

Smart is open to a permanent Texas-Texas A&M game being place on the schedule, like Kentucky-Louisville perhaps. “It’s certainly something I’m definitely open to doing again in the future,” he said.

Better wait until after Sunday to gauge Williams’ mood.

Williams said flat-out that “we’ll be battling uphill” against Texas. Injuries and a three-game losing skid have taken their toll. At one point in November, A&M could practice with only six scholarship players.

“I wouldn’t say I’ve handled it perfectly,” Williams said. “I have gotten discouraged. I have gotten frustrated. I did anticipate it. I think it’s just part of it, and that doesn’t justify the results. So probably a mixture of all of it. I don’t necessarily foresee that changing, per se. What I need to change is my maturity level and how I handle it.”

At least there are a few players on both teams that know what this rivalry means.

Texas freshman Donovan Williams has a unique A&M backstory. His older sister, Kelsey Bone, played at A&M from 2011-13 and was on campus when the Aggies won the 2011 women’s national title. Bone would later become a first-round pick in the WNBA.

Williams remembers running around the A&M practice gym whenever Bone’s teams were playing. “I will admit that I sawed ’em off a few times,” Williams said, referring to A&M’s back-and-forth swaying during “The Aggie War Hymn.”

Williams definitely knows what all the hullabaloo is about.

“It’s not often Texas gets to play Texas A&M recently,” Williams said. “So I would say now this game is for bragging rights. The football team hasn’t really gotten a chance to play them. So since we get to play them, it’s our duty and our job to really go out and represent Texas as best we can.”

“I know those guys pretty well, so that kind of raises the intensity right there,” Hamm said.

The Longhorns need to keep their momentum going, but even Smart admitted it’ll be interesting to see how his players handle the atmosphere. Dickies Arena holds 13,300 fans when configured for basketball, and it figures to be a raucous gathering.

Both teams’ fan bases need an outlet for their football frustrations. This will have to do for now.

Reporters reminded Williams of A&M warhorse R.C. Slocum’s adage that if you grew up in Texas, you were either a Longhorn or an Aggie.

“I guess I was just so far out in the country that I didn’t have an affiliation with either,” Williams said. “No red light in Van Alstyne when I was growing up. Spent a lot of time outdoors working so I could afford to go to college. I was just trying to get to a college. I didn’t necessary grow up with an affiliation or an affinity to either.”

Pretty soon, hundreds of thousands of Texans will say the same thing.

The Dotted Line: Who will be this year’s top senior football player in Texas?