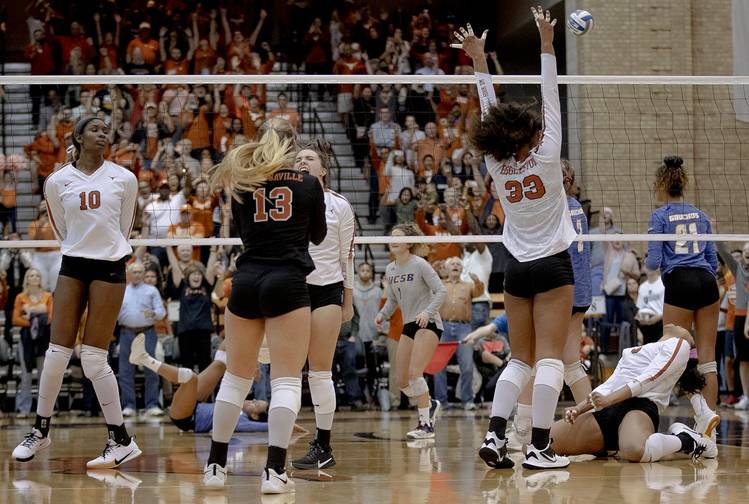 Brionne Butler wasn’t around either when the Gauchos recorded that 3-0 win in a Stanford-hosted regional semifinal.

Even Micaya White, the 23-year-old All-American who teammate Skylar Fields joked this week “has been here forever,” was merely a toddler when Demetria Sance recorded 26 kills in a futile effort.

But on Friday night, those Longhorns helped ensure that history did not repeat itself. In front of a raucous crowd of 3,767, Texas rallied to oust UC Santa Barbara in a second-round match at Gregory Gym. With the 25-22, 19-25, 18-25, 25-18, 15-10 victory, the second-seeded Longhorns advanced to the Sweet Sixteen for the 14th straight season.

“I’m just really proud of us,” said Eggleston, a sophomore outside hitter. “They’re a really great team and I just loved how we battled at the end and just came together and forgot about those two sets that we lost and kind of refocused and came up on top.”

Texas (23-3) and UC Santa Barbara (23-6) had not played since that 1997 showdown, and Texas took the first set in a rematch that was 22 years in the making. UC Santa Barbara, though, pulled away in the second game and dominated in the third session.

The seven-point loss in the third set put Texas on the brink of its quickest exit from the postseason since 2005. But during the intermission between the third and fourth sets, the slumbering Longhorns awoke.

“I just think we knew it was just time to make a change,” Butler said. “You could just see the energy shift and it was just go, go, go at that point.”

UC Santa Barbara’s 1-0 lead was the only deficit faced by Texas in the fourth set as Eggleston compiled seven kills. UC Santa Barbara scored the fifth set’s first two points, but Texas was the first to eight points. Leading 8-7, the Longhorns got kills from four different players and a service ace from White. An emphatic kill by Fields ended the match.

“We couldn’t take a breath until the very end,” Eggleston said.

The Longhorns also received an unexpected boost off the bench. Between the third and fourth sets, Texas benched starting libero Sydney Petersen in favor of Autumn Rounsaville. The gamble paid off as Rounsaville contributed five digs and made several key defensive plays in the final two games.

A senior from nearby Dripping Springs, Rounsaville has worn the libero uniform only a few times in her career. She had yet to don those black threads during a 2019 campaign in which she had been used sparingly as a defensive specialist. Texas coach Jerritt Elliott said the team had tinkered with using Rounsaville as a libero in recent practices and “she’s been performing at a real good level.”

“I wanted to be that person that helped pump up but also keep that steady head and steady level,” Rounsaville said. “You could tell everyone was really getting into it in the fourth set. I knew they had my back, so I really wanted to have their back in that moment.”

This was not Rounsaville’s first moment in the postseason’s spotlight. Three years ago in the third round, Rounsaville made a diving dig in the fifth set of a comeback victory in BYU. But after Texas bested the Gauchos, Rounsaville said she would pick this moment over the biggest highlight of her freshman year.

“I loved the team back then too, but this team has such great chemistry,” Rounsaville said. “I want to play with them again. Next week, I’m ready to ball out with them again. I think tonight was pretty special.”

Notes: Texas will meet Louisville (21-9) in the Sweet Sixteen this upcoming Friday. The start time for the match in Gregory Gym has not yet been announced. …  Butler’s double double was the first of her career. … UT sophomore setter Jhenna Gabriel recorded a career-high 54 assists while Claire Hahn had 15 digs and six assists. … White, who is a senior, moved past Juliann Faucette for sixth place on UT’s all-time kills chart and now has 1,596 in her career.