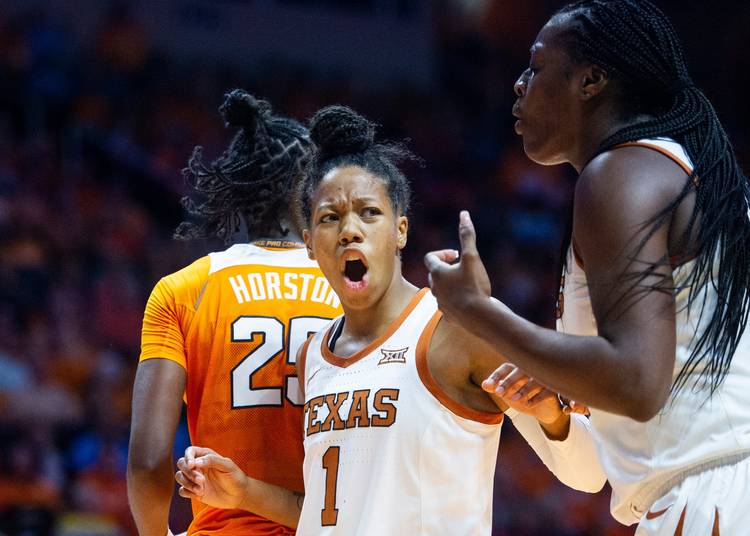 KNOXVILLE, Tenn. — Senior guards Lashann Higgs and Sug Sutton scored 19 points apiece as Texas handed No. 17 Tennessee its first loss of the season 66-60 Sunday in the Big 12/SEC Challenge.
Higgs’ basket with 8 minutes, 56 seconds to play started an 8-0 run capped by a pair of buckets by Sutton to put the Longhorns on top for good at 58-53.
Jada Underwood scored 13 points and added five rebounds for the Longhorns (5-4) as they recorded their first victory of the season against a team in the Associated Press Top 25.
Rennia Davis had 15 points for the Lady Vols (7-1), and Jazmine Massengill added 10.
Neither team shot well down the stretch. After Sutton’s basket at the 6:13 mark of the fourth quarter, the Longhorns were 1-for-6, and they made just 2 of 12 in the last eight minutes.
Texas shot 21% in the second half after making 5 of 11 3-pointers and shooting 42% in the first half for a 42-36 lead.
The Lady Vols shot 26% in the second half and 31% for the game.
The teams missed all 14 of their 3-pointers in the second half.
The Longhorns committed a season-low eight turnovers. They were outrebounded 54-42 — just the third time in their nine games that they have lost the battle of the boards.
Sutton, who has scored in double figures three times in the past four games, also contributed five rebounds and three assists. Higgs, with her fifth game in double digits, added four rebounds.
Senior forward Joyner Holmes led UT with nine rebounds, a total matched by Tennessee’s Kasiyahna Kushkituah. Holmes also tied her career high with three blocks. Charli Collier had six rebounds for Texas.
The Big 12 won the challenge with eight victories over five days. It was the first time either conference had won eight of the 10 games.
On Wednesday, Texas Tech blasted Mississippi 84-48 and Baylor steamrolled Georgia 72-38 — the largest margins of victory in the history of the challenge.
The next night, Iowa State got the third win, topping Alabama 75-66.
On Saturday, Texas A&amp;M and Arkansas broke through for the SEC, with the Aggies downing Oklahoma State 74-62 and the Razorbacks beating Kansas State 81-72. But the Big 12 won the other games, with Oklahoma knocking off LSU 90-68 and TCU beating Auburn 80-65.
The Big 12 swept Sunday’s matchups. In addition to the Longhorns’ win over Tennessee, West Virginia upset Mississippi State 71-65 and Kansas rallied past Florida 76-66.
Texas and Tennessee were facing each other for the 38th consecutive season and 41st time overall, The Lady Vols lead the series 25-16.
The Longhorns will take time off for final exams and then resume play against Ohio at 7 p.m. Dec. 18 in the Erwin Center.