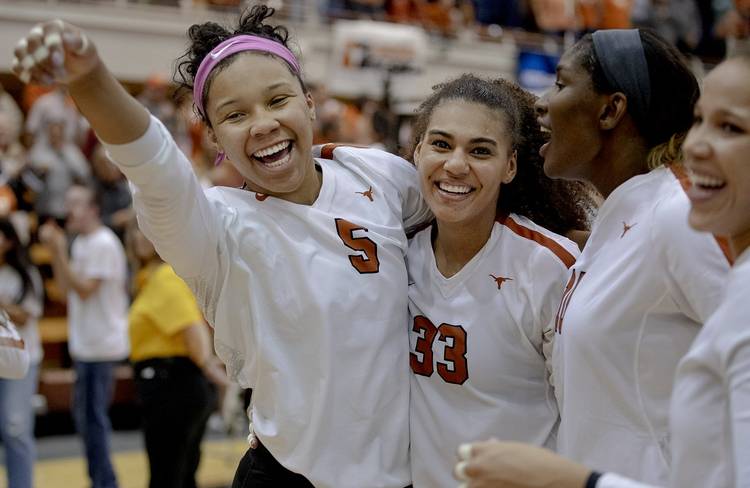 Skylar Fields has stashed all the medals she’s won over the course of her volleyball career back home in Missouri City.

The Texas freshman has collected more than 40 of them, going back to when she started playing volleyball in the sixth grade. There’s a silver medal among the trinkets that was earned when Ridge Point High School finished as the state runner-up in the 2018 UIL Class 6A tournament. And there’s the gold medal she won with the U.S. Women’s Junior National Team in 2018.

That gold medal gives her something in common with two of her teammates. Sophomore outside hitter Logan Eggleston and freshman middle blocker Molly Phillips also were starters for Team USA. And then those same three played for their country in July’s U-20 world championships.

Having already competed to win the world, Eggleston, Fields and Phillips now are focusing on the nation. After opening the NCAA tournament with a pair of wins last week, Texas (23-3) continues its postseason run on Friday. The Longhorns, who last won a NCAA title in 2012, will host Louisville at 3 p.m. in the Sweet 16.

Eggleston, Fields and Phillips all played in UT’s opening NCAA wins over Albany and UC Santa Barbara. In the second round, Eggleston led the team with 22 kills. Fields, who had 18 kills in the two matches, sealed UT’s five-set comeback win over UC Santa Barbara.

Eggleston is hitting .313 this season, and her 3.55 kills per set trail only senior Micaya White’s average of 4.0. Already a two-time all-conference honoree, Eggleston has served 48 aces this fall. That’s the second most for Texas in 16 years, only one behind Amy Neal’s 49 in 2015.

Contributing 2.56 kills per set, Fields is also hitting over .300. She was recently named the Big 12’s freshman of the year. Phillips has settled into a complementary role, and the one-time Big 12 rookie of the week is averaging 0.77 blocks per set.

Did Texas get what it expected from its freshmen this year? “More,” Longhorns coach Jerritt Elliott said.

Two years ago, all three contributed to a team that won the NORCECA Continental Championship. Last year, the Longhorns and their fellow Americans placed eighth in a world championships that featured athletes who play professionally.

The players each said they got a lot out of their international experiences. For Fields, it was beneficial to be pushed by elite talents. Phillips said that seeing the speed of the international game made for an easier adjustment when she got to college. Eggleston got to work on being a six-rotation player and relished the chance to compare herself to some of the best players in the world.

The U-20 World Championship also gave Fields and Phillips a chance to work with Elliott, who was coaching Team USA, before they got to campus. The building of a rapport between those players has also boosted the Longhorns.

“Just building trust with them and knowing what they need on the court has been real helpful going into this season,” Eggleston said. “It’s also been super fun, building that friendship with them.”

In October 2016, Phillips became the foundation of UT’s 2019 recruiting class. Eggleston committed about two months later. Fields pledged at the beginning of 2017.

Eggleston ended up enrolling a year early. Her reclassification made rooming assignments a lot easier at Texas — pet peeves in the freshmen’s room include Fields’ unwillingness to fold her clothes and Phillips’ blaring her country music — but the players remain a tight-knit trio. Fields has said that “if you can fit three peas in a pod, you can do that (with us).”

Those three peas will impact UT’s present as well as its future. Texas has one junior on its roster, and White and Claire Hahn are the only seniors who have played in more than 15 matches this season. Butler, setter Jhenna Gabriel and libero Sydney Petersen, like Eggleston, are sophomores. Middle blocker Asjia O’Neal also has become a full-time starter as a redshirt freshman.

“I feel as long as we keep the chemistry and keep working hard, I feel like the future is really bright,” Fields said. “It can get pretty scary about how good we can be.”