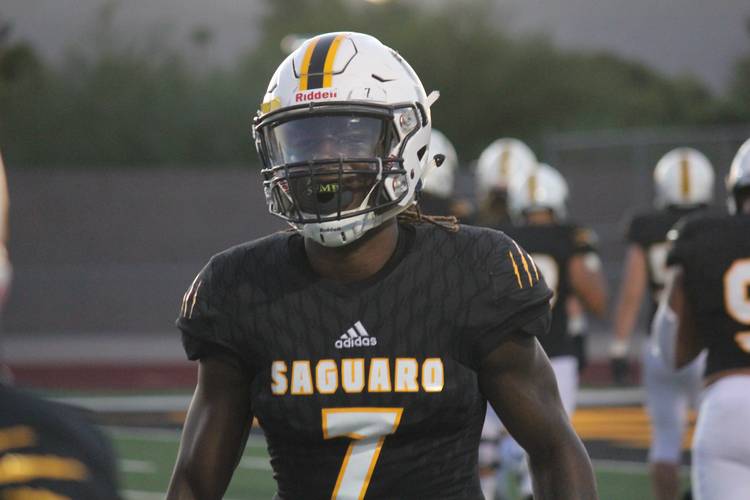 He won’t have long to stew on his high school days, however. Ringo intends to announce his college commitment at halftime of the All-American Bowl on Jan. 4, giving him less than a month to whittle down his top five schools and pick a favorite.

Thank you God for 17 years of blessings🙏 Respect my decision….. #top5 pic.twitter.com/Qig6bTROUT

Whether Texas is that top choice is still unknown, but Ringo can’t help but crack a smile when speaking about his potential future as a Longhorn.

“I could definitely see myself at Texas,” Ringo said.

Texas’ favor with Ringo is like that of many recruits who end up in burnt orange. He likes Austin as a city. He’s complimentary of UT’s history and tradition as a top program in college football. He likes the program’s direction despite a 7-5 regular season in 2019.

Ringo also hasn’t been scared off by recent changes on the coaching staff, including the firing of defensive coordinator Todd Orlando.  He’s just looking for a good fit and a chance to make an impact.

Texas, naturally, remains just as interested in landing Ringo as it was when the cornerback included the Longhorns in his top five in June. He got a home visit from Texas recruiting director and cornerbacks coach Jason Washington earlier in the week. Ringo said the visit went well and that he’s developed a strong relationship with Washington.

“It was really great to see Coach J-Wash,” Ringo said. “He’s a great guy and we’ve built a great bond since I first went out there.”

Washington’s had success developing talent, putting 10 players in the NFL during his coaching career, according to UT athletics. That includes Minnesota Vikings cornerback Kris Boyd, who Ringo has stayed in touch with since he was Ringo’s guide on an unofficial visit last November. With Boyd gone, Ringo said he’s become close with rising sophomore cornerback Anthony Cook, who started four games this season.

“Ultimately, I’m just trying to grow my bonds,” Ringo said. “It’ll be real certain when a place feels like home for me.”

Ringo said he’s not close yet to making a decision and is still in the evaluation process. Texas will have to fight off the other schools Ringo is still considering — Ohio State, Oregon, Alabama and Georgia — if the Longhorns want to land the top prospect.

Texas does have an advantage Ringo’s other finalists don’t have — familiarity. Former Longhorns cornerback great Bryant Westbrook, who went on to spend seven seasons in the NFL at the turn of the century, is an assistant for Saguaro.

Plus, Westbrook helped quickly develop Ringo while winning at the highest level. Ringo won three state titles in his first three years before losing on Saturday. He recovered a fumble and rushed for a touchdown in Saguaro’s 41-34 loss to Chandler.

After going for gold on an international stage, UT’s ‘peas in a pod’ ready to chase an NCAA title