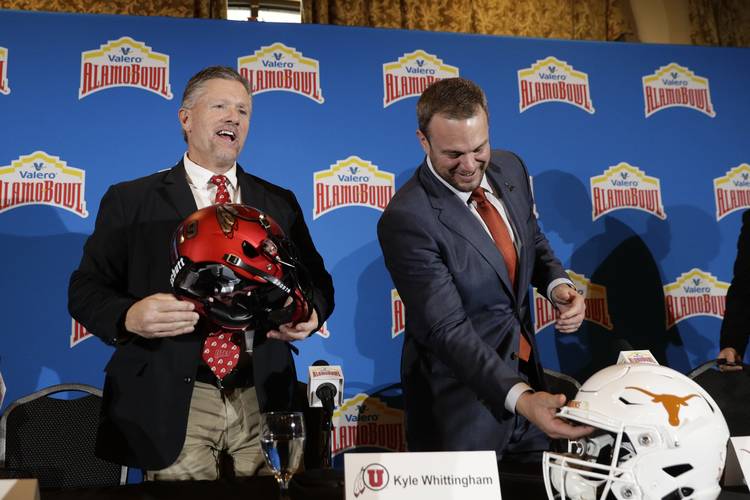 The funny back-and-forth was the only real moment of levity during Thursday’s Alamo Bowl press conference and proof that Herman, always a stickler for workout data, can juggle multiple topics at once.

He autographed Alamo Bowl footballs in assembly-line fashion while addressing questions about his search for an offensive and defensive coordinator. Herman continued with his signature flush T with a black Sharpie while admitting, “I’ve talked to numerous candidates on both sides of the ball and certainly (am) in no hurry.”

“When it happens, it happens,” Herman said in a small room inside The Club at Sonterra. “If the next guy I talk to is the right guy, then he’ll be the guy. If not, then we’ll move on or we’ll circle back to the previous one. There is literally no timetable on it.”

Herman said he has not offered a contract to anyone for either position. Speculation has focused on USC’s Graham Harrell (offense) and former Rutgers coach Chris Ash (defense), but neither appear close to joining Texas.

Asked if he was the main guy doing the interviews and selection, Herman said, “All me.”

Herman cannot hire anyone merely out of convenience. Both have to be the correct hires, at least to him. It’s clear Herman views this as a major staff reset and likely one that he cannot afford to botch.

On offense, Herman said he wanted to turn play-calling duties over to someone else, same as he tried with Tim Beck in 2017. Beck had the play-calling duties taken away from him in 2018, and Herman has since called play-calling a “collaborative” process. But Herman was the one ultimately calling the shots.

Beck had his offensive coordinator’s title taken away and he’s expected to serve as quarterbacks coach for Alamo Bowl prep. FootballScoop.com linked him to the Lamar head coaching vacancy.

When Herman came to Texas, he wanted to be more like a CEO head coach, much like Mack Brown was during his 16-year tenure. Asked if he wanted to go back to that role, Herman said, “I do. Yes.”

“I felt like in the three years here that we’ve gotten better every year offensively,” Herman said. “But in order to do that, I needed to get more and more involved. I think, quite honestly, it took me away from some things that were needed on a holistic level and things that I’m very good at. And that’s not to say that my input will not be felt in the office. It always will.”

In 2017, Herman said his job was to “coach the coaches.” He’s always had a say in game plans, but elite-level coaches typically don’t have much input on a random second-and-5, for example. That’s what top-notch assistants are for.

“Having to spend that much time preparing an offensive game plan every week has taken too much of my time and energy in order to do the things necessary as a head coach to do them at an elite level, like I’ve been able to do in the past,” he said.

Defensively, Herman had been with Todd Orlando for the last five years, going back to their time at Houston in 2015-16. While Beck was merely demoted for the Alamo Bowl, Orlando was fired on Dec. 1 along with outside receivers coach Drew Mehringer. Inside receivers coach Corby Meekins was also reassigned in the staff shake-up.

“They all love coach Orlando, as do I and my family, and we always will,” Herman said in his first public comments about Orlando. “The players, there was a lot of them that felt like they had let him down.”

As for the change, Herman said, “We were in the 90s and 100s in a lot of statistical categories. That’s certainly not championship-level defense, and it’s not Texas-standard defense. So, felt like we needed some freshness.”

Herman said the defensive plan should “highlight our defensive lineman a little bit more.” The overall plan shouldn’t “put so much stress then on our secondary because we have to blitz to do it.”

Asked if he’d lost faith in Orlando’s 3-3-5 base philosophy, Herman said “Nope.” And he sounds open to a four-man alignment or whatever the new defensive coordinator desires.

“We don’t need a scheme at Texas,” Herman said. The coach noted how Ohio State uses four down linemen and one high safety “damn near every snap.” The playoff-bound Buckeyes appear to be doing OK, in Herman’s estimation.

“So it’s really not about the scheme,” he said. “It’s about playing hard. It’s about tackling. It’s about being in the right place at the right times, swarming to the football and being very fundamentally sound.”

Herman said filling out the rest of the coaching staff is “way down the list of priorities right now.” Right now, he’s focused on early signing day next Wednesday and hiring two coordinators. Oh, and the Pac-12 South champion Utes.

All of this was addressed while signing “Hook ’em. Tom Herman” on a row of footballs.

“We have another pen?” he asked mid-autograph and interview.

The Dotted Line: Five future Longhorns are one win away from state title games