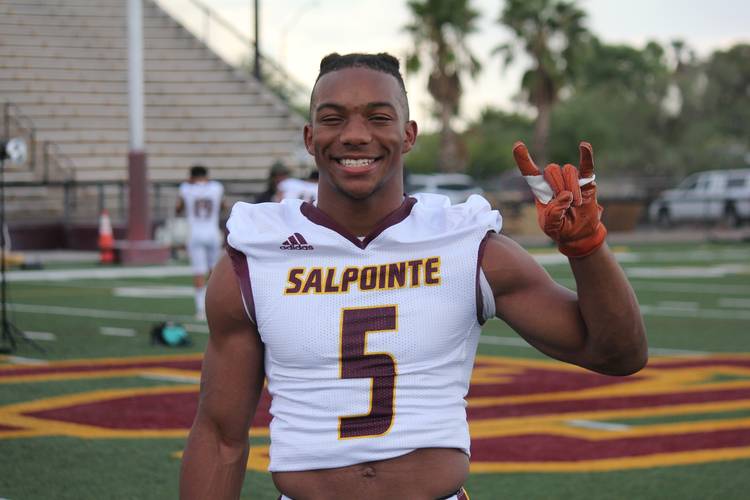 Texas holds 16 commitments heading into the final weekend before the early 72-hour signing period begins on Dec. 18. The class is heavy on offensive talent, which is probably good for the Longhorns considering the firing of defensive coordinator Todd Orlando. Only five of Texas’ pledges project to defense.

Tom Herman arrived late in the 2017 cycle. He signed consecutive top-three classes starting with the 2018 class headlined by safeties Caden Sterns, B.J. Foster and DeMarvion Overshown. The 2019 class has yet to make a major impact minus a few exceptions like Roschon Johnson and Jake Smith. Five-star Jordan Whittington missed the season with an injury. Bru McCoy transferred after spring football. Four-star linebacker De’Gabriel Floyd was forced to retire due to stenosis.

Texas’ class currently ranks sixth in the nation and first in the Big 12 despite a 7-5 season and uncertainty surrounding many of the futures of assistant coaches currently employed. The class is headlined by five-star running back Bijan Robinson and a pair of athletic, proven winners at quarterback in Lake Travis’ Hudson Card and Duncanville’s Ja’Quinden Jackson.

Expect most of Texas’ commits, and prospects across the country, to utilize the early signing period. The players in previous classes chose to use the option of signing in December rather than waiting for national signing day in February. Seven of Texas’ pledges plan to enroll early.

Can Texas keep the class together?

The 16 commitments appear solid, including Robinson, who has maintained that his relationship with Texas assistant Stan Drayton was the main factor in his recruitment. He’s clearly the most important player in the class, and not just because he’s the lone five-star prospect. Texas’ need at running back was highlighted by Johnson’s move to the position following a prep career at quarterback.  Ty Jordan flipped from Texas to Utah earlier this week.

The one player to watch is Temple wide receiver Quentin Johnston. The four-star is seriously considering a flip to TCU, but the Longhorns host him on an official visit this weekend and hope to eliminate any concerns over the coaching staff and lack of a wide receivers coach.

The seven expected early enrollees are likely safe considering they plan to move out of home and into a dorm in Austin after the first week in January. Players who plan to enroll early must apply to the college and get accepted, so it’s harder to envision a late flip unless the move was in the works for at least a month. Texas’ early enrolles are expected to be Card, Xavion Alford, Vernon Broughton, Jerrin Thompson, Logan Parr, Jake Majors and Troy Omeire.

Who joins before Wednesday?

The recruiting fireworks take place early in the morning on Wednesday, the first day to sign. Any player joining the class is likely to make it public before then, minus a handful of prospects planning to announce at all-star games in January. Five-star cornerback Kelee Ringo and four-star defensive lineman Alfred Collins are Texas targets and among those contemplating a wait until their respective all-star games to announce, though both are likely to sign in December and keep it quiet until the game.

Texas’ most recent offers were to cornerback Isaiah Dunson of Tucker High School in Georgia and defensive tackle Sawyer Goram-Welch of Longview. Welch is a 6-4, 278-three star who was previously committed to Oklahoma State. He plans on taking an official visit to Austin this weekend, putting the Longhorns in clear position to land him. Herman needs more defensive tackles if Texas plans to move toward a four-man front. Dunson was a one-time Florida State pledge. The Longhorns are familiar with Georgia after signing cornerback Kenyatta Watson II and running back Derrian Brown in 2019.

Carthage wide receiver Kelvontay Dixon is a longtime Texas target who is still alive in the state playoffs, which has put his recruiting on the back burner. The Longhorns are the favorite if he signs in December. He’s the younger brother of current UT running back Keaontay Ingram and decommitted from Arkansas after Chad Morris was fired.

Texas also could hunt the JUCO ranks late in the cycle and add a name out of nowhere to fill out the class. I’d also expect the Longhorns add at least one graduate transfer at a need position before the spring or during the summer depending on how many current players enter the portal after the bowl game.

How good is this class?

Don’t let the decommitments or the lack of numbers paint your perception of Texas’ class. It’s an elite group of players full of four-star talents. Thirteen of the 16 in-state commitments made the recent update of the 2020 Fabulous 55. The only three-star prospects in the class are Jordan, Jaden Hullaby and Dajon Harrison. The average rating of the class is higher than any class since Herman’s arrival.

Robinson is the second-ranked running back in the nation. No team in the country is signing a quarterback duo as talented as Card and Jackson with both leading state semifinalists in the Class 6A Division I level.  The four-man offensive line class is full of hard-nosed prospects with high upside, and the trio of wide receivers are diverse and talented.

The one knock is on defense, specifically the amount of players. A five-man defensive class isn’t ideal for a program needing an influx of talent on that side with a new coordinator leading the way in 2020. Adding Collins, Ringo and Dunson would boost the numbers and raise Texas’ national class rank.