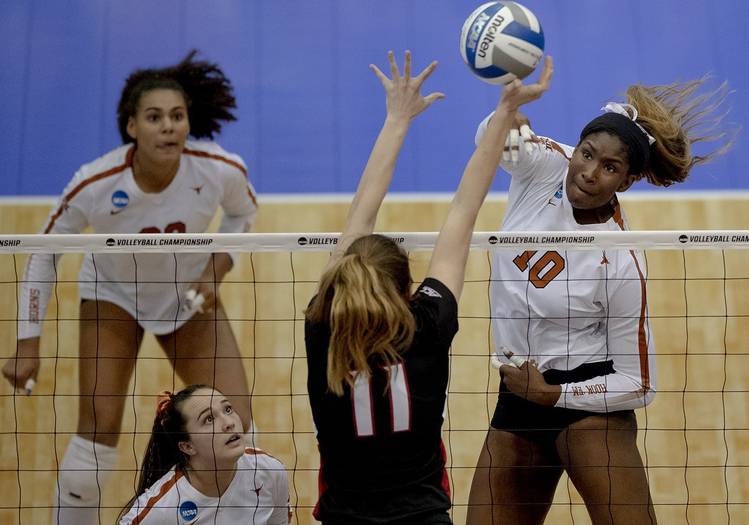 Texas middle blocker Brionne Butler (10) attempts to spike a volleyball past Louisville's Anna Stevenson during the third round of the NCAA volleyball tournament on Dec. 13, 2019 in Austin. [NICK WAGNER/AMERICAN-STATESMAN]

As the fifth set at Gregory Gym reached its halfway point Friday afternoon, Texas threw everything it could at Louisville.

Micaya White, a senior and soon to be a four-time All-American, sent six shots to Louisville’s side of the net. Skylar Fields, perhaps the nation’s best freshman, tried a swing. The Longhorns even stuffed two attempts by the Cardinals.

Louisville will meet Minnesota in the Elite Eight on Saturday. Texas, which was the tournament’s No. 2 overall seed, suffered its earliest NCAA exit since 2005.

“It sucks a lot,” Texas sophomore Logan Eggleston said. “I love this team so much, we’ve had such a great year and I’m really sad that it ended like that. Louisville, they’re a really great team and they really showed up today. I just wish we could have responded like we have many times over the season.”

Louisville (22-9) stunned the pro-Texas crowd of 4,137 by taking the first two sets. The Longhorns (23-4) barely trailed over the next two sets, but that momentum was fleeting. In the fifth set, the Cardinals jumped out to a 5-2 lead.

Texas pulled within 5-3 on a kill by middle blocker Brionne Butler. The next two points, however, were scored by Louisville. Then the long rally ensued.

“I don’t even remember if I was on the court or not,” Louisville middle blocker Anna Stevenson said.

“You were. You were, like, dead,” her coach, Dani Busboom Kelly, interjected.

“Yeah, I was dying,” Stevenson said. “We just were going in, trying to enjoy every moment and love it. I don’t know, I was just thinking just go hard and enjoy this because it might not happen again.”

Rallying to within scores of 13-11 and 14-12, Texas made things interesting down the stretch. Louisville, however, continually fought off the Longhorns. A kill by Stevenson ended the match.

In each of its losses this season, the Longhorns were upended in a fifth set. Texas was beaten 15-12 by Stanford, 15-13 by Rice and 15-9 by Baylor. Against Louisville, Texas hit .129 and collected only two blocks in the final frame.

“I think we felt we had the momentum going forward because we had just taken the last two sets off them,” Eggleston said. “I just think they started really executing and we just weren’t doing our side.”

After the game, Texas coach Jerritt Elliott said the Longhorns were done in by errors in the opening set. “We gave them 14 points off of errors and you can’t do that at this point,” he rued. In the second session, Texas let an 11-4 lead slip away.

Texas, which entered the weekend with a NCAA-best .325 hitting percentage, outhit Louisville .320-.235. But UT’s 18 attacking errors were supplemented by an additional 15 miscues on the service line. The Longhorns also failed to find an answer for Louisville freshman Aiko Jones, who had a match-high 23 kills.

“They stepped up and played really well,” Elliott said. “Jones had a monster night. We knew that she was good and we couldn’t contain her.”

Texas was led by White’s 20 kills. She’s one of five seniors, but only she and defensive specialist Claire Hahn had significant on-court roles this season. Next year, Texas will return four players who had at least 100 kills this season as well as setter Jhenna Gabriel and libero Sydney Petersen. Texas’ 2020 recruiting class currently has four players.

“It’s time to go back to the gym and get better,” Petersen said.

Notes: White ended her career with 1,616 kills, the sixth-best total in school history. … Eggleston had four aces; her 52 this year were the most since Mira Topic had 53 in 2003. … Freshman middle blocker Asjia O’Neal left the match in the fourth set with an apparent leg injury, but later returned. … Louisville and No. 7 Minnesota, which outlasted Florida in five sets in its regional semifinal, will battle in Gregory Gym at 7 p.m. on Saturday night.