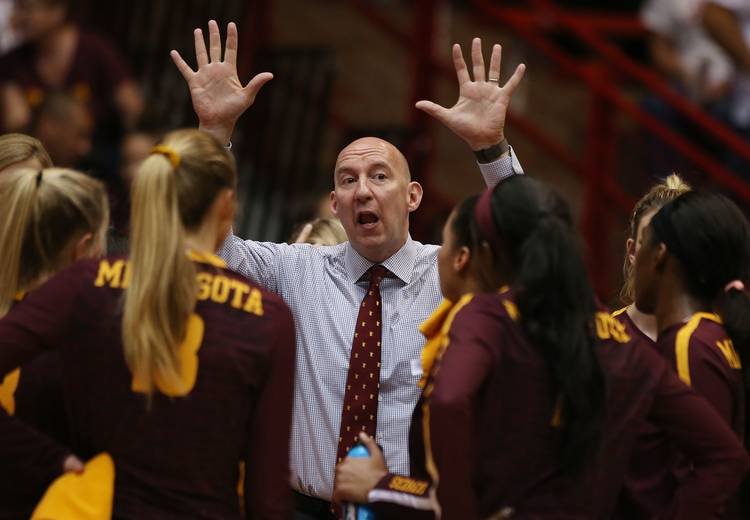 Playing like a team with unfinished business, Minnesota rolled over upstart Louisville in straight sets Saturday night in an NCAA volleyball regional final at Gregory Gym.

“This team has grown and is very mature,” McCutcheon said. “It seems like for the program, there’s been a shift since those first couple (of Final Fours) in 2015 and 2016. You’re managing a lot of unknowns relative to the event. Now that we’ve had the opportunity to be there a couple times, we can be a little more focused on who we need to be and not get caught up too much in that other stuff.”

For the Cardinals (22-10), it was a bitter end to a weekend that opened with such promise in a stunning five-set victory over Texas on Friday. Making a quick perusal of the box score, Cardinals coach Dani Busboom Kelly pinpointed the fine line between winning and losing against Minnesota.

“They served so tough,” Busboom Kelly said. “We got aced nine times. That’s clearly a lot for a three-game match. Their serves were dropping out, and we just couldn’t get under them. It starts with the serve and pass game, and they definitely beat us in those categories tonight.”

Regardless of Saturday’s outcome, Louisville’s players believe the future of the program is in good hands. The Cardinals’ roster featured six true freshmen and a redshirt freshman.

“What we accomplished this year, setting a new standard for Louisville volleyball, we’re really proud of that,” Cardinals junior setter Tori Dilfer said. “We wanted to end our season on a win — we’re not that team this year. It’s fueled us with fire.”

The Gophers dominated from start to finish and kept the Cardinals off balance throughout the match.

Minnesota never trailed in the first set, leading by as many as four points and holding three-point leads multiple times. Louisville pulled to within 22-21, but Minnesota closed out the set by scoring the final three points.

“Louisville’s good, but we knew if we could consistently keep it on them, that would be the best way to have a tactical advantage,” McCutcheon said. “Offensively and defensively, we were balanced.”

The Gophers remained in control in the second set as Adanna Rollins (10) and Alexis Hart (seven) combined for 17 kills. Louisville led for the first time in the match at 1-0; however, the Cardinals quickly fell behind and trailed by as many as 11 points. Busboom Kelly called two quick timeouts in an attempt to stop the bleeding, but Minnesota tallied 15 of the final 20 points to capture the second set by double digits.

“We came out knowing it wasn’t going to be easy,” said Aiko Jones, Louisville’s redshirt freshman opposite hitter, who recorded a match-high 13 kills to go along with five digs. “They really brought the fight to us, and we tried to fight back as hard as we could. Just didn’t go our way. What we have done this season is bigger than what we did not accomplish tonight.”

In the third set, Minnesota again led early at 4-1 and 7-3. The Gophers, boasting a roster deep in postseason experience, were poised and decisive. Looking to force a fourth set and extend the match, the Cardinals struggled to resemble the team that upset Texas a day earlier

Louisville had its chances. The Cardinals rallied to make it 12-12 and appeared ready to finally shift some of the momentum their way. But Minnesota countered with a 5-0 run, forcing another Louisville timeout. When the dust settled, the Gophers led 21-14 and pounced to deliver the knockout blow.

Source: All signs pointing toward Chris Ash as the new Texas defensive coordinator