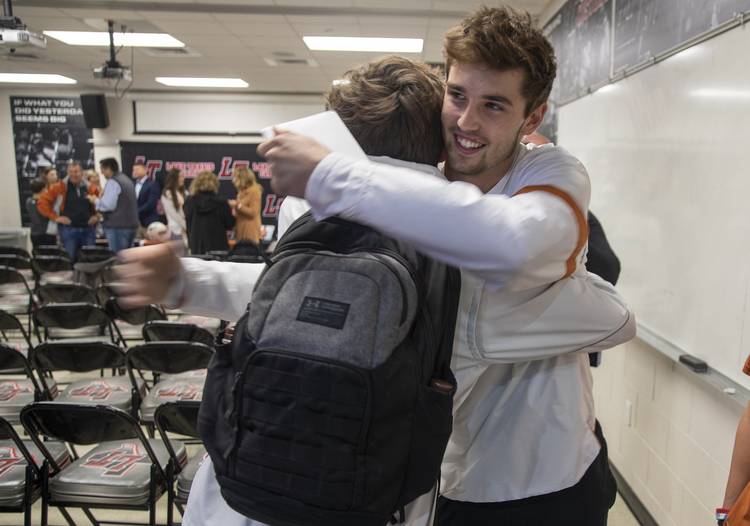 Hudson Card talks with friends and family after signing National Letters of Intent to The University of Texas on Wednesday,Dec. 18 , 2019 [RICARDO B. BRAZZIELL / AMERICAN-STATESMAN]

Longhorn Network producers have long wanted true all-access to the Texas football program. They sure got it Wednesday.

In HD quality, no less.

Wednesday’s start to the early signing period had all sorts of wackiness. Baylor introduced its new signees with Twitter puppet shows. Kansas State used Legos. On that scale, Texas fit right in.

“Obviously before we start, I do want to apologize for something that ended up on live TV this morning,” Herman said at his afternoon press conference.

Herman said he was retelling his often-told story about his first Texas-Oklahoma experience. Nice old ladies in crimson were flipping the bird, Herman always says, and he nearly once replicated the two middle-fingered salute to UT media. “Regardless, it was a poor judgment on my part, and I do apologize for that,” he said.

Herman should be allowed some leeway after all the recruiting energy he’s expended lately. Texas signed 16 players on Wednesday, eight of whom will be early enrollees, and Herman just recently landed a new defensive coordinator, Chris Ash.

The class, which currently ranks 11th in the country, includes one of the nation’s best running backs in Bijan Robinson as well as Hudson Card, the four-star quarterback from Lake Travis. Defensive tackle Vernon Broughton is the top-ranked defensive lineman in the state, and there’s a slew of talented offensive linemen.

Texas’ class has dipped from top-five to top-10 after recent decommitments, and then to 11th on Wednesday and second in the Big 12. Then again, the Horns always sign talented players; the issue has been development.

“We knew that this was going to be a small class when we started,” Herman said, “and that it would be about quality, not quantity.”

That’s where Ash comes in. Herman and Ash have worked together twice before at Iowa State and Ohio State. Ash, 45, arrives in Austin on Thursday but will have no on-field coaching duties until after the Alamo Bowl.

“He is a guy that believes what I believe in defense, which is to be very fundamentally sound, to keep it very simple,” Herman said. “Go recruit elite athletes, develop the heck out of them and let ’em play fast on Saturdays.”

Herman said Ash and the defensive staff must “decide who our best players are.” That may sound simplistic, but it’s a first step to developing a cohesive plan. Former defensive coordinator Todd Orlando’s 3-3-5 scheme highlighted the secondary. But the three-man front generated almost no pass rush this season.

Herman confirmed Texas will go back to using four-man defensive fronts under Ash. Herman said last week that he sees Ohio State using four down linemen and one high safety “damn near every snap.” The Buckeyes have consistently good defenses every year.

“In our talks, he said you want to be simple but not predictable,” Herman said of Ash. “It’s not going to be a whole lot of defense. It’s going to be teaching them the fundamentals, developing them” and making sure the players know what to do on each call.

“Then, like all great defenses we got to fly to the football,” Herman said.

The Horns signed only two defensive linemen — Broughton and Sawyer Goram-Welch, a late bloomer from Longview. Herman said he expects to sign two more in February. Highland Park’s Prince Dorbah is the only linebacker among the initial 16 signees, but the coach believes more are out there.

Herman said the recruiting staff will keep looking for “the right four or five guys” to sign in February on national signing day. But Texas is likely to hit the graduate transfer market to fill specific defensive depth.

“There is enough talent out there that will not have signed today that I think we’ll find one, if not two, that we think can be developed into a championship linebacker,” Herman said.

Herman appears to be content to slow-play the search for an offensive coordinator. His mandate was to fix the defense and get through signing day, according to one UT source.

The offensive coordinator search could extend beyond the Alamo Bowl on Dec. 31. For now, Herman said he’s content to “take a deep breath right now.”

“Obviously, I talked to a few guys,” Herman said. “But I promised our players, I promised the recruits that we would get the very best. Most of those guys are still playing in bowl games and are in the NFL.

“So yeah, I have explored some NFL options as well,” he confirmed. “This is something that could take a while because of you know the bowl games that these guys are playing in.”

Whoever is selected, the new coordinator will have two freshman quarterbacks to work with. Card, who is enrolling in January, said he had no concerns about what Texas will do offensively.

“I trust Tom Herman and what he does,” Card said Wednesday. “I’m not worried or anything like that.”

Duncanville quarterback Ja’Quinden Jackson will have some rehabilitation work ahead of him. His high school coach confirmed Wednesday that Jackson suffered a torn ACL in his left knee in last week’s state semifinal win over Rockwall.

Xavion Alford, a defensive back from Alvin Shadow Creek, was also hurt most of his senior year with a knee injury. Alford is another early enrollee, so he will finish his rehab under the watchful eye of UT trainers and doctors. Herman said “we expect him to be cleared when he gets here.”

Robinson will be cleared to launch when he arrives this summer. The two-time Arizona player of the year is the state’s all-time leader in touchdowns (114) and yards (7,036).

“To give you an example of what kind of kid he is, he’s a very spiritual, very godly person from a very strong Christian family,” Herman said. “He leaned on a lot of prayer, a lot of discussion. Very close with his family, a lot of hard discussions to make that decision. And he’s never looked back and has been a solid as a rock.”

With all these new additions, including Ash, Texas fans are hoping their football program is, too. Just flip more games into the win column.

RELATED: Incoming running back Bijan Robinson has five-star expectations for Texas, too

RELATED: Texas signee Hudson Card on Longhorns’ future: ‘I trust Tom Herman and what he does’

Texas tunes up for No. 1 Stanford with sloppy 73-60 win over Ohio